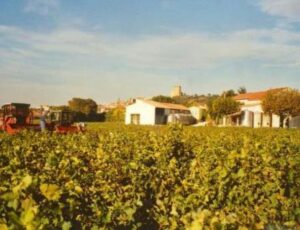 Learn everything about Jean-Pierre Boisson Domaine du Pere Caboche Chateauneuf du Pape with wine tasting notes, wine and food pairing tips, best vintages, a history of the property and information on the vineyards and winemakings. If you want to read about other important wineries and wine makers from the Rhone valley: Links to all Rhone Valley Wine Producer Profiles

Domaine du Pere Caboche has a long history in the Chateauneuf du Pape appellation that dates all the way back to 1652 when the property was owned by the Chambellan family. Through marriage and a dowry, the property passed to the Boisson family who still own and manage the estate today.

If you’re wondering how a winery owned by the same family uses a name other than their family name on the label, the explanation is charming and simple. Caboche is a translation for horse shoe nails which is related to the families previous occupation as blacksmiths.

It is important to realize that for most growers in the Southern Rhone, many families needed a second job as until recently, the wine were difficult to sell.

Jean-Pierre Boisson Domaine du Pere Caboche owns 23 hectares of vines in Chateauneuf du Pape. 20 hectares are devoted to the production of red wine and 3 hectares are reserved for the white wine grapes.

The estates best vines are their 17 hectares located in the La Crau sector with its rocky, limestone soils.

Jean-Pierre Boisson Domaine du Pere Caboche Tradition is a blend of mostly Grenache with Syrah and Mourvedre. But depending on the vintage, you can find small amounts of Cinsault, Counoise, Muscardin, Terret Noir, Vaccarese, Bourboulenc, Clairette, Grenache Blanc, Roussanne and Picpoul in the blend. The terroir is mostly rocks, stones and sand, with a sliver of limestone.

The vines are scattered in the Barbe d’Asne, la Crau, la Font du Pape, le Parc, les Plagnes, and les Serres lieux-dits. The wine is aged in a combination of traditional concrete vats and old, large, oak foudres for between 12 to 14 months. This well priced wine is easy to find as slightly more than 6,500 cases are produced each year.

Jean-Pierre Boisson Domaine du Pere Caboche Elisabeth Chambellan is produced from the estate’s oldest Grenache vines that range in age from 80 years to over 100 years. The wine is made from usually 95% Grenache and 5% Mourvedre. All of the grapes come from the la Crau vineyard.

The wine is aged half in foudres and 50% in concrete tanks for between 12 to 24 months, depending on the character and quality of the vintage. For a wine of this quality made from vines this old, this is a steal in the marketplace!

Jean-Pierre Boisson Domaine du Pere Caboche Blanc is on average a blend of 40% Roussanne, 40% Clairette, 10% Grenache Blanc and portions of Picpoul and Bourboulenc.

Domaine du Pere Caboche can be enjoyed on the young side. Young vintages can be popped and poured, or decanted for about 1 hour, give or take. This allows the wine to soften and open its perfume. Older vintages might need very little decanting, just enough to remove the sediment.

Domaine du Pere Caboche is usually better with 2-4 years of bottle age. Of course that can vary slightly, depending on the vintage. In the best vintages the wine should be consumed within 3-12 years after the vintage.

Domaine du Pere Caboche Chateauneuf du Pape la Mirande is made for the top luxury hotel in Avignon, La Mirande. The wine is not exported and what is not sold to the hotel is offered in France.