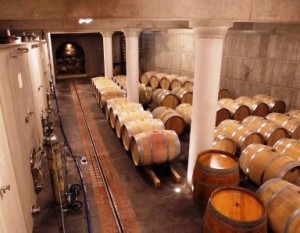 Learn everything about Domaine Raymond Usseglio Chateauneuf du Pape with wine tasting notes, wine and food pairings, best vintages, a history of the property, information on the vineyards, and winemaking. If you want to read about other important wineries and winemakers from the Rhone valley: Links to all Rhone Valley Wine Producer Profiles

Pierre Usseglio took over the family estate and Raymond Usseglio created his own winery using his name in 1964. As soon as Domaine Raymond Usseglio was created, the estate was bottling and selling their own wine, which was not a common practice in those days.

Today, the current generation of the Usseglio family, headed by Stephane Usseglio, continues to manage the Domaine in the Southern Rhone Valley.

Domaine Raymond Usseglio also owns 5 hectares in the Cotes du Rhone appellation and another 3 hectares of vines that are classified as IGP. All the vineyards in Chateauneuf are farmed using sustainable, biodynamic farming techniques.

Domaine Raymond Usseglio Chateauneuf du Pape – The blend varies, but it is often close to 75% Grenache, 15% Mourvedre, 5% Syrah, 3% Counoise and 2% Cinsault. The vines are in a myriad of different terroirs with rocks, stones, clay, sand, and limestone soil.

The vines are planted in l’Arnesque, Bois Senechaux, Cabrieres, Charbonnieres, Palestor, les Terres Blanches and the le Tresquoys, lieux-dits. The wine is aged in a combination of cement vats, foudres and a small amount French oak barrels for an average of 18 months. 3,500 cases are produced each year.

Domaine Raymond Usseglio Cuvee Imperiale – 95% old vine Grenache and 5% other varieties. The Grenache vines are more than 100 years old. They were planted in 1902. The terroir is sand with some rocks and stones in the soil.

The vines are planted in the Piallon, Grand Pierre and Girardette lieux-dits. The wine is vinified and then aged in cement vats for an average of 18 months prior to bottling. The production is on average only 250 cases per year. The wine was first produced in 1985.

The wine is aged in an average of 80%, French oak barrels and in tanks. The wine made its debut with the 2007 vintage. The production is quite small at close to 200 cases per vintage.

Domaine Raymond Usseglio Cuvee Girad is a special Cuvee produced for the American Importer, Weygandt-Metzler, which is an old vine, Grenache-dominated wine blended with Mourvedre, Cinsault, and Counoise.

Domaine Raymond Usseglio Reserve Roussanne – The 100% old vine Roussanne is vinified and aged in 100% new, French oak barrels. The vines are more than 40 years of age. The wine is not made in every vintage. And when it’s produced, not much is made as the average production is close to 90 cases.

Domaine Raymond Usseglio Reserve Pure is made from 100% Roussanne as the name implies. The vines were planted in 1985.

Domaine Raymond Usseglio can be enjoyed on the young side with 1 hour or a bit more of decanting. This allows the wine to soften and open its perfume. Older vintages might need very little decanting, just enough to remove the sediment.

Domaine Raymond Usseglio is usually better with 3-4 years of bottle age. Of course, that can vary slightly, depending on the vintage. In the best vintages, the wine should be consumed within 4-15 years after the vintage.

Domaine Raymond Usseglio also produces wine from 5 hectares of vines they own in the Cotes du Rhone appellation.