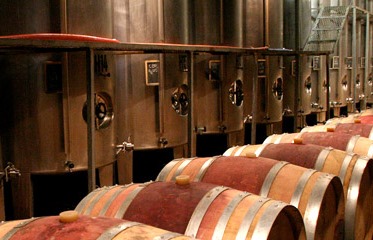 Learn everything about Domaine de la Solitude Lancon Pere et Fils with wine tasting notes, wine and food pairing tips, best vintages, a history of the property and information on the vineyards and winemaking. If you want to read about other important wineries and wine makers from the Rhone valley: Links to all Rhone Valley Wine Producer Profiles

Domaine de la Solitude has one of the longest histories in the Rhone Valley. The Barberini family who founded the estate can trace their roots in Chateauneuf du Pape back to the 1604. Before that, the family was well known in their native land of Italy.

Perhaps that move was due to issues related to loud accusations about destroying historic monuments so the materials could be used to create, new, palatial estates and palaces for their personal use. But what is important for us is, that move to Avignon led the family to a career making wine in Chateauneuf du Pape!

From there, through marriage and a dowry, what we know of today as Domaine de la Solitude was born. The estate took its name from the La Solitude lieu-dit, which is where much of their vineyards are planted.

Domaine de la Solitude was one of the larger vineyards in the region by the mid to late 1800’s. At the time, the wine was produced and sold under the name of Vin de la Solitude.

It took a few hundred years, but by 1900, the Southern Rhone Valley estate had become so popular, they began to produce, sell and bottle their own wine.

The modern era for Domaine de la Solitude began in the 1970’s when a direct descendant through marriage, Pierre Lancon began managing the estate. That tradition continues today, as the estate is managed today by his children, Michel Lancon and Jean Lancon.

All 35 hectares are located in the La Solitude lieu dit, which is next to La Crau. The vines are planted in a terroir of sand, loam, clay and rocky soils. Domaine de la Solitude has old vines. In fact, their oldest parcel of Grenache vines are more than 100 years old.

In 1985, Domaine de la Solitude made changes in their approach to wine making. They replaced their old foudres with concrete vats and stainless steel tanks.

In 1996, they renovated their winemaking facilities again and began experimenting with using some new, French oak barrels as well for the aging process. In 1999, Domaine de la Solitude expanded their output, launching new labels. Cuvee Barberini made its debut in 1999 and the Reserve Secret was launched with the 2000 vintage.

The parcels and grape varieties are each vinified separately. Depending on the grape, Domaine de la Solitude will ferment in concrete vats, stainless steel tanks or resin vats. On average, up to 10% of the wines can be aged in a portion of new, French oak barrels.

Domaine de la Solitude Chateauneuf du Pape – From a blend of 55% Grenache, 25% Syrah, 15% Mourvedre and 5% Cinsault. The wine is aged in tank and a combination of new and used French oak barrels for 16 months. Production is close to 8,500 cases per year.

Domaine de la Solitude Reserve Secrete – The blend for this wine varies, depending on the vintage, on average, it’s 50% Grenache and 50% Syrah. However, in some vintages, Mourvedre is also used as part of the blend. The wine made its debut with the 2000 vintage.

The terroir is pure sandy soil with vines planted in the La Crau and Blachières lieux-dits. The wine is aged in a combination of new French oak barrels that range from 30% to 60% of the wine, while the remainder of the production is aged in foudre and tank for about 16 months. Only 250 cases are made each year.

Domaine de la Solitude Cuvee Barberini – The wine was first made in the 1999 vintage. The name of the wine is a tribute to the original founders of the estate, the Barberini family. The wine is made by blending 45% Grenache and 45% Syrah with 10% Mourvedre, although that can vary widely.

Domaine de la Solitude Cuvee Cornelia Constanza made its debut in 2005. The name of the wine was chosen to honor an ancestor of the family, Cornelia Constanza Barberini. The wine is produced from 100% old vine Grenache. The vines are in a terroir of 100% sandy soil in the La Crau vineyard.

The vines used for this wine are all more than 80 years of age. For the aging of the wine, 30% of the wine is aged in new, French oak barrels and the remainder is aged in vat and foudre for about 15 months. The production is on average 250 cases per vintage.

Vin de la Solitude was introduced in the 2016 vintage. This special cuvee is a hommage to the founder of the estate, Paul Martin, who was one of the first vignerons to produce, bottle and sell their own wine. At the time, the estate was selling their wine under the name of Vin de la Solitude, hence the name of this special hommage. The antique bottle shape and the label is also a reproduction of the original 18th century bottling.

In fact, the blend is also an approximation of the wine produced in the 18th century using a unique assemblage of 30% Counoise, 25% old vine Grenache, 15% Syrah, 15% Mourvedre, 5% Clairette, 5% Bourboulenc, 5% Roussanne and various smaller percentages of Clairette Rose’and Grenache Blanc.

Produced from yields of 25 hectoliters per hectare or less, the grapes are whole cluster fermented. The wine is macerated for up to 80 days in wood vats and is aged for an average of 18 months in French oak barrels.

Very little Vin de la Solitude is produced. In fact the production is limited to less than 1,000 bottles and 100 magnums per year and is only made in select vintages.

Domaine de la Solitude Cuvee Barberini Blanc – 80% Roussanne and 20% Clairette. On average the production is close to 250 cases per year.

Domaine de la Solitude can be enjoyed on the young side. Young vintages can be popped and poured, or decanted for between 1-2 hours allowing the wine to soften and open its perfume. Older vintages might need very little decanting, just enough to remove the sediment.

Domaine de la Solitude is usually better with 3-5 years of bottle age. Of course that can vary slightly, depending on the vintage. In the best vintages the wine should be consumed within 4-15 years after the vintage.