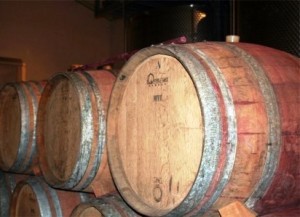 Learn everything about Domaine Bois de Boursan, Chateauneuf du Pape with wine tasting notes, wine, and food pairing tips, best vintages, a history of the property, and information on the vineyards and winemaking. If you want to read about other important wineries and winemakers from the Rhone valley: Links to all Rhone Valley Wine Producer Profiles

Domaine Bois de Boursan was founded in 1955, thanks to Jean Versino, who moved the family from the winemaking region of Piedmont in Italy over to Chateauneuf du Pape.

Bois de Boursan takes its name from the small area where they are located, which is not far from the Chateauneuf du Pape village.

Like many producers in the Southern Rhone valley, they started off selling their wine in bulk to negociants. At Bois de Boursan, that continued until some point in the late 1980s.

One of the interesting aspects of the vineyards belonging to Bois de Boursan is they have 15 different soil types in their 16 hectoliters of vineyards. The vineyards are divided into 27 different parcels.

On average, the vines are a respectable sixty years of age. All vineyard management is 100% organic here.

However, at Bois de Boursan, they also own old vine Grenache that is more than 100 years of age.

Bois de Boursan Tradition is produced from a blend of 65% Grenache, 15% Mourvedre, 15% Syrah and 5% other varieties. The vines for this wine range from 40-80 years of age.

The terroir is rocks, clay, sand, and limestone. Bois de Boursan is aged in large foudres that were previously used to make beer in the Alsace region. Close to 3,200 cases are produced each year.

Domaine Bois de Boursan Cuvee des Felix made its debut in 1995. In the beginning, the production was quite small, today close to 5,000 bottles are produced. The wine is made from a blend that on average 60% Old vine Grenache, 25% Mourvedre, 10% Syrah, and 5% of various allowable grapes types.

The Grenache is from old vines that for the most part are 90 years old, give or take a few years.

The terroir is various galets and sand. Bois de Boursan is always the product of old vines with very low yields. The yields can be close to 20 hectoliters per hectare.

Bois de Boursan Cuvee des Felix in a combination of demi-muids and old, used, French, oak barrels for close to 18 months. The production is quite small as only 400 cases are produced each year.

Domaine Bois de Boursan Les Baud is produced from their oldest vines that can be over 100 years of age. The wine is usually a blend of 50% Grenache, 35% Mourvedre, and 15% Syrah.

The grapes are fully destemmed. The wine is aged in a combination of 20% new, French oak barrels and stainless steel tanks. The production hovers around 125 cases. The wine so far has been produced in 2003 and 2007.

Domaine Bois de Boursan Blanc is quite hard to find as the production is close to 150 cases per year. Made from a blend of 35% Grenache Blanc, 35% Clairette, 15% Roussanne, and 15% Bourboulenc, the wine is vinified in tanks and then aged in a combination of new and old French oak casks for 6 months before bottling.

Bois de Boursan can be enjoyed on the young side. Young vintages are better with 1-2 hours of decanting. This allows the wine to soften and open its perfume. Older vintages might need very little decanting, just enough to remove the sediment.

Bois de Boursan is usually better with 3-5 years of bottle age. Of course, that can vary slightly, depending on the vintage. In the best vintages, the wine should be consumed within 7-18 years after the vintage.

The white wine of Bois de Boursan is best served with a myriad of different seafood dishes, shellfish, crab, lobster, sushi, sashimi, chicken, pork, and veal, as well as Asian cuisine and cheese.