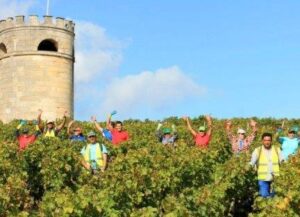 This article is focused on the 2015 Bordeaux vintage growing season and harvest. If you want to read tasting notes and ratings for the top wines from the 2015 vintage, please read any of these articles: 2015 Bordeaux Barrel Tasting Notes for the Best 500 Wines!

Long before the official start of the 2015 Bordeaux harvest and growing season, people were talking about the rule of 5 when it came to Bordeaux. The rule of 5 stated all vintages ending with 5 were usually good years: 1945, 1955, 1985, 1995, and of course, 2005. Would 2015 Bordeaux following in those footsteps? Or, would it be similar to 1925, 1935, 1965 or 1975? After 4 years of uneven results in Bordeaux, which included the difficult 2011, mixed 2012 and 2014 along with 2013, which many tasters and growers called the weakest vintage in perhaps 40 or more years, a very good vintage was in high demand. How much demand is the question on everyone’s mind as Bordeaux gets ready to receive thousands of journalists and merchants from all over the world.

At this point, while I am excited about tasting the 2015 Bordeaux vintage in a few weeks, I only know two things with certainty. There is demand already developing to buy 2015 Bordeaux. I truly hope that is not seen as an opportunity to attach high prices to the 2015 vintage. There is an ocean of wine available in the marketplace. 2014, 2013, 2012 and 2011 have sold poorly. There is a lot of 2010 available at release prices or less. The market has not been kind to Bordeaux for the past several years. That does not even begin to take into consideration Robert Parker’s retirement. Without the hypnotic drumbeat of high Robert Parker praise, selling wines en primeur is going to be a difficult task indeed. That situation will be exacerbated if the wines are priced higher than what the market bears. That does not mean realistic consumers expect the chateau to give away their wines. They can and should be priced higher than 2014 as the wines are better. But with the massive amount of available Bordeaux wine in the pipeline at merchants and negociants, coupled with years of bad press and declining demand for Bordeaux, it would help the long term image of Bordeaux and spark interest to buy en primeur if prices were set at realistic levels. The chateaux must remember that the consumer needs to benefit from buying early. If that is not seriously taken into consideration, the future of futures is in serious jeopardy.

In a top year, first and foremost, the flowering needs to be even and quick. Following a warmer than usual April and the first heat wave of the 2015 vintage in early May, Bordeaux experienced flowering under perfect conditions. When the flowering for 2015 Bordeaux began about May 25, finishing roughly 2 weeks later, growers were happy, especially as the flowering was completed before a much needed late spring rain was about to take place. Producers were also smiling because of the perfect flowering, for the first time in 4 years it was possible that the vintage would allow for good yields.

Early June showers averaging 33 mm, (1.1 inches) helped replenish the water tables for the thirsty vines. Next, conditions began to warming up in June. By the end of June, Bordeaux experienced several warm, sunny days in a row. June 29, brought an intense heat wave with temperatures of 41 degrees reported in the vineyards. That period of hot, dry, sunny conditions continued into July. Again it was still quite early, but the 2015 Bordeaux vintage was off to a good start. Some much needed rain fell July 22. In most appellations, the months of May, June and July were among the hottest and driest months on record! Those hot, sunny, dry weeks between June and July helped shape the vintage. Bordeaux remained hot and dry. The lack of water and resulting stress on the vines pushed back the start of veraison at some estates which began to take place by late July.

The interesting combination of a harvest expected to take place fairly early with the 2015 Bordeaux vintage, and vines that were stressed and had shut down, or at least slowed their growth, posed a dilemma for some vineyard owners. While a few growers were already seeking comparisons to other, recent, great hot vintages, 2015 Bordeaux was unique in that the heat, sun and drought arrived early in the season, instead of in August, which is more the norm. The continuous drought conditions were all that was needed for a huge fire to break out in the commune of Pessac Leognan. While no vineyards were damaged, over 600 hectares of forest land was destroyed by blaze.

The long period of heat, sun and drought conditions led to stress for the young vines, which caused some estates to irrigate their young vines. Depending on the terroir, young vines were dying on the vine in some vineyards. Conditions improved when rain began to fall August 3. The amount of rain varied from 11 to 22 millimeters, depending on the appellation. By the middle of August, things were looking good for the 2015 Bordeaux vintage, and growers were thinking the harvest would come early that year. An early harvest does not guarantee a good vintage, but on the other side of the coin, late is never great, when it comes to harvests, so things were on the right track.

At this point, things took a turn in the opposite direction with August, due to the large amount rain, dampening growers enthusiasm. Some vineyards received as much as 100 mm of water. (almost 4”) As you know, it ain’t over ‘til it’s over. And it was still far from over. However, it’s important to note some of the keys to understanding the vintage and one of those keys is that until August, the 2015 Bordeaux vintage had some vineyard managers thinking that conditions were too hot and too dry. By the end of July, the vines had received almost 50% less rain than most recent vintage. But August will go down in history as one of the wettest Augusts recorded as the month delivered almost twice the amount of rain it normally experienced.

This is where the terroir came into play. The vineyards with soil able to handle the heat, drought and drain the extra moisture produced berries that were small in size, with thick skins and depending on the vineyard coupled with harvest dates, potentially ripe tannins and good levels of concentration, the perfect recipe to make high quality wine.

While the red wine grapes needed more time, picking for the white Bordeaux wine grape varieties commenced in late August. Chateau d’Yquem began harvesting grapes for Ygrec in August. Chateau Carbonnieux was the first Classified Growth to announce they were beginning to harvest their dry, white wine grapes on August 27. More rain fell in some areas of Bordeaux at the end of August, which created semi tropical conditions. However, that water was a definite help to vineyards with vines that were stressed from the drought conditions experienced during the summer. A few days later, most of the other Pessac Leognan chateaux also began harvesting Sauvignon Blanc under warm, sunny conditions as temperatures were on average close to 30 degrees Celsius. The remainder of the week saw a light dip in temperature to about 26 degrees Celsius. In the Medoc, Chateau Margaux started bringing in their Sauvignon Blanc September 3. The white wine grapes were harvested under very good conditions.

September nights began cooling off, which is exactly what the grapes needed to add freshness and acidity to the fruit from the hot, dry year. Even better for the vintage, more much needed rain fell the weekend of Saturday, September 12 and Sunday, September 13. While a few growers had already started harvesting their young vine Merlots, most notably Chateau Cheval Blanc, which began picking September 12, many vineyard managers were still waiting a little longer, hoping for better phenolic ripeness. Mid-September had growers crossing their fingers with the potential for a great vintage on the level of 2005, 2009 and 2010. However, more rain started to fall and kept falling. It continued raining from Monday, September 14 until the end of the week. This period of rain was another factor in the shaping of the 2015 Bordeaux vintage.

By September 17, many growers in Pomerol were starting to harvest. Rain also began to fall off and on. Due to warm conditions, the humidity spiked to 70%. By Saturday, the rains had slacked off. However, more rain was expected the following week. Interestingly, some estates in the Left Bank had already completed their Merlot harvest while producers in Pomerol were just beginning to pick.

September 18 saw temperatures ranging from an average of 68 degrees Fahrenheit, (20 degrees Celsius) during the day, to 56 degrees Fahrenheit, (13 degrees Celsius) or cooler at night. From a growing season shaped by the high heat and drought conditions, the 2015 Bordeaux vintage was now playing a different tune with the various levels of rainy conditions experienced during the harvest. What’s important to know about the rain is that all the reports of it affecting the harvest were in most cases over stated. The vines were done feeding and the skins were thick. The problem that some wines could have is a lack of ripeness in the tannins. You also need to note that the rain was not constant, nor did it rain equally in all places, as is typical for Bordeaux. Each appellation is quite unique. The rain was strongest in the north of the Medoc, tapering off the further south you travel. So you have more rain in St. Estephe and Pauillac, than you do in Margaux. Once again, the importance of the terroir and its ability for drainage came into play. In Pessac Leognan, the months of September and October were actually drier than much of Bordeaux, as they received much less precipitation than usual.

As usual, by the time the harvest in Pomerol was in full bloom for many properties, things were just getting going in St. Emilion. Chateau Angelus began picking Merlot September 22. In the Left Bank, by September 22, everyone in the Medoc was busy harvesting Cabernet Sauvignon under rainy skies. The temperatures were cool and breezy. Growers were not worried about rot developing from the rains thanks to those breezy conditions. By Wednesday of that week, no more rain was forecast.

In Pomerol, Petrus completed harvesting September 29. Other Pomerol estates finished after that. Most of the Merlot in the Medoc was picked by October 3. In the Left Bank, rain fell gain at the end of the last week of September and continued until the first weekend in October. A few days of sunshine helped, allowing everything to dry out, before rain fell again starting, Sunday, October 4. The rain continued off and on until tapering off by Tuesday. A few more days of pleasant weather followed. By the middle of October, the harvest for the Cabernet Sauvignon was completed in the Medoc.

In the Right Bank, by the middle of October, most Saint Emilion chateaux finished bringing in the last of their Cabernet Franc grapes. Ausone completed picking October 15 and Valandraud, with their cooler terroir did not finish harvesting until the following week.

A vintage report provides you with a road map to the potential quality and style of the wines. But that does not make it a sure thing. It appears that at this point, all the elements for very good wines are present. Reports from what I consider reliable sources say there are some very good wines from 2015, but the level of quality varies from appellation to appellation and of course at each chateau. The terroir and picking dates were crucial with 2015 Bordeaux.