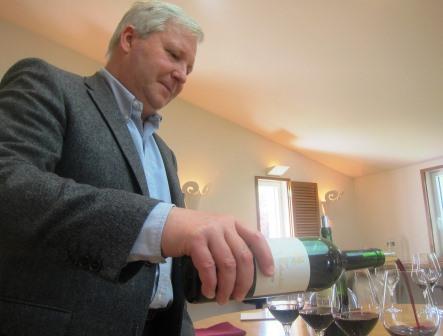 In the Medoc, when you have a vintage where Cabernet Sauvignon is the star, one might expect the wines of Pauillac to shine like the brightest star in the sky. Clearly, that is not the case with 2013 Bordeaux or 2013 Pauillac.

2013 d’Armailhac – With a licorice, floral and dark cherry nose, this delicate, medium-bodied Pauillac ends with dusty tannins and a forward cassis and cherry finish. From 59% Cabernet Sauvignon, 28% Merlot, 12% Cabernet Franc and 1% Petit Verdot, the wine is aging in 35% new oak. 88-90 Pts

2013 Batailley – Medium bodied with crisp red berries and tobacco and espresso on the nose, this lighter, uncomplicated style of Pauillac—produced from a blend of 94% Cabernet Sauvignon, 4% Merlot and 2% Petit Verdot—will show best in its youth. 87-89 Pts. ,

2013 Clerc Milon – With espresso, plum and smoke on the nose, the medium/full-bodied wine is forward and open, ending with a simple blackberry note. From a blend of 58% Cabernet Sauvignon, 27% Merlot, 12% Cabernet Franc, 2% Petit Verdot and 1% Carmenere, the yields were 23 hectares per hectare. The wine is aging in 50% new French oak. 88-89 Pts

2013 Croizet-Bages – Light, strict and tart, this wine has cranberry and cassis notes with tobacco in its drying finish. Drink this young. 82-83 Pts

2013 Duhart-Milon – Using 80% Cabernet Sauvignon and 20% Merlot, the wine opens with floral, black raspberry and cassis in the nose. Medium bodied with a saline character to its light, soft, open, dark cherry personality, this is a Duhart Milon to drink young. The yields were 25 hectoliters per hectare. 89-90 Pts

2013 Grand Puy Ducasse – Opening with cedar, coffee bean and cassis on the nose, this light wine has notes of cranberry and cassis and ends with a sandy, textured finish. 87-88 Pts

2013 Grand Puy Lacoste – Earth, cedar and hints of oak and blackberry emerge on the nose. On the palate, this approachable wine showcases bright cassis character, medium body and a fresh, spicy finish. 88-90 Pts From a blend of 80% Cabernet Sauvignon and 20% Merlot with yields of 31 hectoliters per hectare, the wine reached 13.2% alcohol. The Grand Vin represents 65% of the crop. 88-90 Pts

2013 Haut Bages Liberal – With a dusty, leafy nose, the wine is lean, herbal and focused on cranberry and cassis. 83-85 Pts

2013 Haut Batailley – With crunchy cassis, thyme, spice and coffee bean scents, the wine is crisp, bright and spicy, finishing with a light red berry note. Blending 76% Cabernet Sauvignon and 24% Merlot, the wine reached 13.2 alcohol. From yields of 31 hectoliters per hectare, the Grand Vin represents 50% of the crop. 87-89 Pts

2013 Lafite Rothschild – Tobacco, cassis and gravel open the perfume, transitioning to a medium-bodied, polished and fresh—but slightly short and light, cherry finish. From a blend of 98% Cabernet Sauvignon and 2% Merlot, the blend is the highest percentage of Cabernet Sauvignon in the blend since 1994. Before that, 1961 was produced from 100% Cabernet Sauvignon. From yields of 30 hectoliters per hectare, the wine represents 33% of the harvest. 90-92 Pts

2013 Latour – Cassis, plum, mint, fennel and earthy aromas require effort to find. The medium-bodied, ruby-colored wine is soft, polished, delicate and easy to drink. This is a polite style of Latour, with a beautiful purity of fruit that will taste best by 10 years of age. From a blend of 95.3% Cabernet Sauvignon, 4.3% Merlot and .4% Petit Verdot, the wine reached 13.4% alcohol. Only 33% of harvest was used to produce the Grand Vin. 92-94 Pts

2013 Lynch Bages – Ruby red in color with coaxing aromas of cassis, cedar and stone, this straightforward wine has crisp, crunchy cassis notes and an easy-to-drink finish. This should drink well young. From a blend of 72% Cabernet Sauvignon, 20% Merlot, 6% Cabernet Franc and 2% Petit Verdot. The alcohol reached 13%. The wine will be aged in 75% new French oak barrels. The yields were a low 31 hectoliters per hectare. 64% of the crop was used in the Grand Vin. 90-91 Pts

2013 Lynch-Moussas – Light, bright and crisp, the wine showcases crunchy red berries and a spicy cranberry finish. From a blend of 96% Cabernet Sauvignon and 4% Merlot, this will be best in its youth. 85-87 Pts

2013 Mouton Rothschild – Hints of vanilla bean, tobacco, cassis, blackberry and truffle lead to a medium/full bodied-wine with cassis, blackberry and soft, polished tannins. The wine should improve and add more depth with a few years of aging. From 89% Cabernet Sauvignon, 7% Merlot and 4% Cabernet Franc, the yields were 30.1 hectoliters per hectare. Less than 50% of the harvest was placed in the Grand Vin. 2013 represents the smallest amount of cases produced at Mouton Rothschild since 1969. The Merlot at Mouton went through veraison after the Cabernet Sauvignon for the first time in Philippe Dhalluin’s memory. 93-94 Pts

2013 Petit Mouton – The medium-bodied, forward style allows the soft, bright and spicy essence of cassis and blackberry to shine through. From 93% Cabernet Sauvignon and 7% Merlot, this will be fun to drink on release. 88-90 Pts

2013 Pedesclaux – From 48% Merlot, 47% Cabernet Sauvignon, 3% Petit Verdot and 2% Cabernet Franc, the wine reached 12.96% alcohol. Cassis, earth and cherry aromas are accompanied by a medium-bodied wine with a spicy black cherry and herb profile that should be fun to taste early. 87-89 Pts

2013 Pichon Comtesse de Lalande – With smoke, spicy cassis and pepper in the nose, the wine feels soft, delicate and forward. Its lack of weight renders it light/medium bodied, while the open, fresh finish showcases black raspberry, herbs and black olive. Drinkable on release, this vintage was produced from 100% Cabernet Sauvignon for the first time in the estate’s history. The wine reached 12.8% alcohol from 13 hectoliters per hectare, and the Grand Vin represents 33% of the crop. Another record was set with 2013 Pichon Lalande, this is the smallest level of production in the estate’s history. 89-91 Pts

2013 Reserve de la Comtesse – Filled with floral and cherry personality, the wine is light and soft, registering on the cranberry and sour cherry side of the style range. 84-86 Pts

2013 Pichon Longueville Baron – Blending 82% Cabernet Sauvignon with 18% Merlot, the wine reached 13.2% alcohol and will be aged in 70% new French oak. From yields of only 32 hectoliters per hectare, the Grand Vin represents 40% of the crop. This is the lowest level of production for Pichon Baron in close to 50 years. With a developed nose of cassis, tobacco, black cherry and licorice, the wine features oak that’s already integrated into the wine. Soft and round, medium bodied and fresh, this wine has prominent tannins. Give it 5 years or so of bottle age before popping the cork. 89-91 Pts.

2013 Les Tourelles de Longueville – Dominated by Merlot, the wine is light in color and body, ending with cassis and cranberry notes. 83-85 Pts

2013 Pontet Canet – Showing more fruit character than most wines from this difficult vintage, the wine has a nose of blackberry, wet earth and cigar box. Medium/full bodied with plush textures, this balanced wine finishes with plum, licorice and ripe tannins. This would be a good wine in any year, but in 2013, it is remarkable. Interestingly, there is no second wine produced in this vintage. The low yields set a record for the estate as they were only 15% hectoliters per hectare. From a blend 65% Cabernet Sauvignon, 30% Merlot, 4% Cabernet Franc and 1% Petit Verdot. The wine reached 13% alcohol. 92-94 Pts.