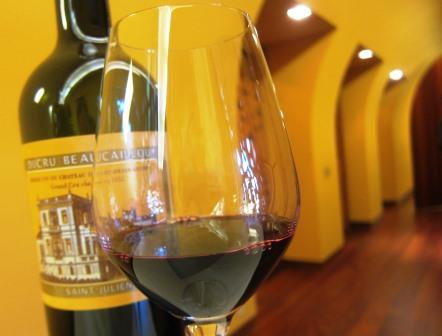 2013 St. Julien is the winner of the most consistent appellation in the 2013 Bordeaux vintage. At their best, the wines are charming. They are not dry or under ripe. But they are not wines to age for a long time. In most instances, the best 2013 St. Julien wines are clean, pure and fresh. So what’s the problem with 2013 St. Julien? The wines are also light in raw material. They lack a depth of raw material and focus on cherries, black raspberries and other red fruits. For younger collectors without deep cellars, and restaurants, these 2013 St. Julien wines are the right type of wines you should be looking at with one important caveat, they need to be priced correctly for this style of vintage. For a summary and overview of the 2013 Bordeaux Campaign so far… 2013 Bordeaux Vintage and Futures Campaign Summary

2013 Beychevelle – With an earthy, sweet and sour cherry nose, this classically styled wine serves up strong notes of cherry griotte and licorice in the fresh, but austere, short finish. Blending 54% Cabernet Sauvignon, 38% Merlot and 8% Petit Verdot, this is the first time since 2001 the property did not use Cabernet Franc in the blend. The wine reached 13.4% alcohol. This represents 45% of the Grand Vin. 88-90 Pts

2013 Branaire Ducru – From blending 63% Cabernet Sauvignon, 31% Merlot, 5% Petit Verdot and 1% Cabernet Franc, the wine reached 13% alcohol. The grapes were harvested between September 30 and October 15, and the wine is aging in 60% new French oak barrels. Garnet in color with a touch of vanilla, fresh herbs, spicy blackberry, smoke and floral notes. On the palate, this wine is medium bodied and offers bright red berries and fresh cassis, ending on a light, spicy fruit note. This should be accessible on release. 90-92 Pts

2013 Ducru Beaucaillou – Blending 90% Cabernet Sauvignon and 10% Merlot, this garnet-colored wine reached 13% alcohol with a pH of 3.60. The wine will be aged in 100% new French oak barrels for 12 months. With medium body and soft, polished texture, the wine showcases vanilla bean, forest leaf, tobacco, cedar wood and cherry pipe tobacco. Showing a much-needed light touch in this vintage, the wine is soft, forward and will offer pleasure young. The wine was produced from yields of 20 hectoliters per hectare and represents less than 30% of the total crop. 92-93 Pts

2013 Croix de Beaucaillou – From a blend of 52% Cabernet Sauvignon, 45% Merlot and 3% Petit Verdot, the wine will age in 60% new French oak barrels. In this open and forward medium-bodied wine, fennel, smoke and black cherry aromas lead in to light, fresh black raspberries. Drink this on the young side. 87-88 Pts

2013 Lalande Borie –From 70% Cabernet Sauvignon, 26% Merlot and 4% Cabernet Franc, the ruby-colored wine has a light style and focuses on cherries, licorice and red berries. Drink this over the first 2-4 years of life. 85-87 Pts

2013 Gloria – Dark red berries, espresso and fennel add some complexity to this soft, forward wine. Showcasing cherry, earth and licorice, this wine was successful for the vintage. 88-89 Pts

2013 Gruaud Larose – With medium body, this earthy wine is brimming with red berry character and finishes with dusty tannins and spice. 88-89 Pts

2013 Lagrange – Light, bright and spicy, this wine is dominated by cherry and fresh strawberry and will be best in its youth. 86-88 Pts

2013 Langoa Barton – With coffee bean, cassis and peppery cherry aromas, the wine is medium bodied and light on its feet, finishing with bright red berries. From a blend of 65% Cabernet Sauvignon, 30% Merlot and 5% Cabernet Franc, the wine reached 13% alcohol and is being aged in 60% new French oak. 87-89 Pts

2013 Leoville Barton – Using 85% Cabernet Sauvignon and 15% Merlot, the wine reached 13% alcohol and will be aged in 60% new French oak barrels. Licorice, coffee bean, cassis and dark cherry aromas open to a forward, classic style with an easy dark cherry finish. Unlike many vintages of Leoville Barton, this should drink well quite early. 89-92 Pts

2013 Leoville Las Cases – Using 74% Cabernet Sauvignon, 14% Cabernet Franc and 12% Merlot, the wine was made from only 35% of the harvest, reaching a pH of 3.69 and 13.10% alcohol. Dark ruby in color with pink edges, the wine has a floral nose with forward notes of tobacco, boysenberry, mocha and forest aromas. On the palate, easy tannins accompany bright, fresh black raspberries. This is a very forward style of Leoville Las Cases, which is a wine that normally takes decades to develop. This should drink well early, perhaps with only a few years of age after release. 92-94 Pts

2013 Leoville Poyferre – With notes of spicy cassis, flowers, olive and herbs, the wine has flesh and softness to the fruit and tannins, finishing with sweet black raspberries. From a blend of 65% Cabernet Sauvignon, 26% Merlot, 6% Petit Verdot and 3% Cabernet Franc, the wine reached 13% alcohol with a pH of 3.63. The yields were 34 hectoliters with 45% of the harvest going in to the Grand Vin. This is very strong for the vintage. 91-93 Pts

2013 Talbot – Medium bodied with a whiff of oak in the red berry nose, the wine is on the light side. This is for early drinking in its first decade of life. 87-88 Pts