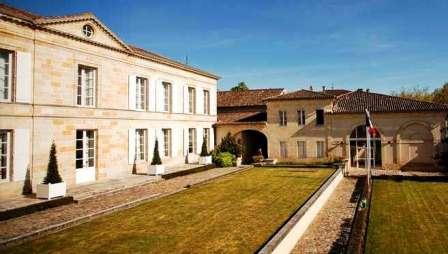 Learn everything about Chateau Grand Puy Ducasse, Pauillac, Fifth Growth with wine tasting notes and wine with food pairing tips. Learn all the best vintages, a history of the property, and information on the vineyards and winemaking. If you want to read about other important, Bordeaux Chateaux: Links to all Bordeaux Wine Producer Profiles

The history of Chateau Grand Puy Ducasse dates back to the middle of the 18th century when Arnaud Ducasse bought a small house next to the Gironde river. He obtained the land from Jacques de Segur. Segur is one of the famous names in the early days of Bordeaux, as they owned much of the land that is devoted to the top chateaux in the Medoc.

That purchase by the river is important because, it eventually became the location of the chateau. In fact, Chateau Grand Puy Ducasse has a unique distinction of being one of the few Bordeaux chateaux that are not located in their vineyards. The chateau, built in the 18th century is located close to the Gironde river.

Additional purchases and exchanges allowed the family to increase the size of what would become the vineyards for Grand Puy Ducasse.

Some of their vines were purchased from the Dejean family, who sold a portion of their Pauillac vineyards to Pierre Ducasse. Those vines soon became Grand Puy Ducasse, while the remainder of their holdings went on to create Chateau Grand Puy Lacoste.

In 1797, the son of Pierre Ducasse inherited the Bordeaux estate known as Ducasse-Grand-Puy-Artigues-Arnaud, which included 60 hectares of vines. His marriage with Jenny Ducasse produced two children who eventually managed the estate when it was classified in 1855 under the name of Chateau Artigues Arnaud. To honor the founders of the Medoc estate, the name was later changed to Grand Puy Ducasse.

Interestingly, Chateau Grand Puy Ducasse has a connection to Sauternes. At some point in time, near the turn of the 19th century, in the early 1900’s, the estate was owned by a member of the Suduiraut family. The official company called Grand Puy Ducasse was founded in 1932.

In 1971, Grand Puy Ducasse was sold to investors who once again enlarged the properties Left Bank vineyard holdings. In 1980, the chateau added a new vatting house, including sorting tables and other wine making facilities.

The property was sold in 2004 to CA Grands Crus who began to renovate the vineyards and winemaking facilities. They also brought in the oenologist, Denis Dubourdieu to consult. That situation changed in November 2013, when the owners, who wanted to shake things up brought in Hubert de Bouard of Chateau Angelus from St. Emilion to consult. Things have never been better.

Chateau Grand Puy Ducasse has slowly but surely continued not only improving their wines, but keeping up with technological innovations. In 2012, after giving optical sorting a try in the difficult 2011 Bordeaux vintage, the estate liked the results so much, they purchased their own optical sorters.

In 2012, the chateau completed a renovation of their cellars and added new, cement, egg shaped vats for vinification, which provided a bit more minerality to the wine.

The 40 hectare Medoc vineyard of Grand Puy Ducasse is planted to 63% Cabernet Sauvignon and 37% Merlot, which shows an increase in the amount of Cabernet Sauvignon in the vineyard, giving the wines more structure, tannin and complexity.

The vineyard of Grand Puy Ducasse can be divided into three main blocks with plots on gravel, clay and sand soils. However, their parcels are widely dispersed in the appellation on a myriad of exposures, elevations and soil types.

In the northern part of Pauillac, their vines border other famous Pauillac estates, Mouton Rothschild, Lafite Rothschild and if you travel further to the north, Pontet Canet and Chateau dArmailhac.

The wines are aged in 50% new, French oak barrels for an average of 18 months, depending on the character of the vintage. Production averages slightly more than 10,000 cases per year for Chateau Grand Puy Ducasse. There is a second wine, Prelude a Grand Puy Ducasse.

Chateau Grand Puy Ducasse needs some time in the cellar before it is truly fun to drink. It is a strong, tannic Pauillac wine. Young vintages can be decanted for an average of 2-4 hours, give or take. This allows the wine to soften and open its perfume. Older vintages might need very little decanting, just enough to remove the sediment.