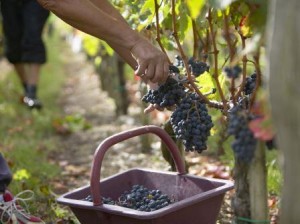 There are more holidays for wine and food than you might think. Looking at the list, it certainly seems like if something exists, there is a holiday to celebrate its existence. At least to me, some things are certainly more interesting and relevant than others. When they create a holiday celebrating holidays, let me know. Of course, you know what they say about glass houses and all that sort of stuff, right?

Being a wine lover and a fan of all things Cabernet Sauvignon, if you’re on the same page with me for that, you are in luck. August 29, 2013 marks the day to celebrate this extraordinary grape and the wines it produces as that day has been set aside for the International Cabernet Sauvignon day.

Jean Emmanuel Danjoy – Clerc Milon “We look for complete phenolic ripeness when harvesting it. Ideally, that means melting skins with no tannic astringency, good color extraction and brown seeds. Luckily, that level of ripeness can be achieved in our climate with potential alcohol below 13.5% and with good acidity. Those qualities are important because Cabernet Sauvignon is the backbone of our wines.”

Cabernet Sauvignon comes in all shapes and sizes and produces an incredible array of wines, and wine styles. If you want to read about wines we’ve tasted from Cabernet Sauvignon, please see our Wine Tasting Notes. If you’re reading this article with a glass of wine in your hand, that’s even better!

Jean Charles Cazes – Lynch Bages “The greatest Cabernet Sauvignon wines are characterized by their capacity to age, combining a powerful structure with elegance and finesse. The Cabernet Sauvignon grown on our terroir at Lynch Bages often in their youth express black currants fruit, flowery violet aromas and a hint of minerality, for example graphite and shaved lead pencil. It tends to develop with a few years a more complex bouquet of spicy notes, or even cigar box aromas. The finish has to be smooth, polished and very long!”

Clearly, Cabernet Sauvignon is the world’s most famous red wine grape. It might seem like it has been around forever, but that is not the case. Cabernet Sauvignon is not that old. It was created during the 17th century when French wine growers crossed Cabernet Franc and Sauvignon Blanc to come up with a brand new grape that offered new tastes, flavors and textures. Perhaps more importantly, the grapes thick skins made it easier to grow. By the 18th century, Cabernet Sauvignon had become widely popular, especially in the Left Bank of Bordeaux.

The thick skins on the Cabernet Sauvignon grape are one of the grapes key attributes, according to Didier Cuvelier, the owner of Chateau Leoville Poyferre in St. Julien.

Patrick Maroteaux – Branaire Ducru “The qualities we are looking for when picking Cabernet Sauvignon are grapes that can produce wine with the structure, elegance and the aromatic richness that are necessary for the development of our wines in the long term.”

Dominus, one of the quintessential wineries in the Napa Valley produces wines with a blend similar to what you might find in the Left Bank of Bordeaux. Aside from the fact that it works, it’s also understandable due to the fact that Dominus is owned by Christian Moueix, whose family owns chateaux like Trotanoy and of course Petrus. As Dominus is getting ready to begin picking their 2013 Cabernet Sauvignon the first week of September. Tod Mostero, the wine maker for Dominus explains what they look for at Dominus with their Cabernet Sauvignon in the vineyard.

“Tod Mostero – Dominus “We seek harmony, tantamount to the freshness of a rosebud as it opens. If you pick before or after, you have lost it. Cabernet Sauvignon, at its pinnacle, expresses purity, balance and complexity transcending its varietal character.”

Dominus, due to its unique, supple, balanced style is not only popular with American’s, it’s enjoyed by many people in Bordeaux as well. Jean Charles Cazes of Lynch Bages recalls tasting an older vintage.

Jean Charles Cazes – Lynch Bages “I can remember a great bottle of Dominus stolen from my the cellar of my father, Jean Michel Cazes. I think it was a 1994 Dominus. I served it blind to some friends and it was very misleading! Many thought it was Bordeaux. I was very impressed by the finesse and drinkability.”

As we mentioned previously, in Bordeaux, Cabernet Sauvignon is always used as part of the blend. It can be over 90% of the blend in some vintages at select estates in the Left Bank. At other properties, it might be as low as 50%, or even a little less. At Chateau Palmer in Margaux, they use one of the higher percentages of Merlot in their blend in the Medoc. Yet, without the addition of Cabernet Sauvignon according to Thomas Duroux, the director of Chateau Palmer, the wine would not have the same finesse.

In vintages like 2012, it was not always possible to achieve the desired level of ripeness to the fruit.

At Chateau Pichon Baron in Pauillac, the director Jean Rene Matignon explains what he looks for in Cabernet Sauvignon.

Jean Rene Matignon – Pichon Baron “We are seeking a good balance between tannins and acidity. In Bordeaux. there is no over ripeness problems with Cabernet Sauvignon. The challenge is to wait until as long as possible for the good tannins so we can preserve the tonicity and minerality in the wines character. The trick is to avoid flatness and dilution.”

For wines dominated by Cabernet Sauvignon, Henri Lurton of Chateau Brane Cantenac enjoys many different wines and styles, but his preference is for Bordeaux, especially with bottle age.

Henri Lurton – Brane Cantenac “Even if I love some Italian or California Cabernet’s, Bordeaux is the place for me. If I can’t be a bit of a chauvinist with Margaux, I’ll choose Pauillac. If I have to name a wine, I’ll say Chateau Latour. If you really need a vintage, I’ll say 1959!”

Philippe Melka who owns his own, eponymous winery, and is an equally well-known as a consultant working with numerous estates in the Napa Vallet agrees with Henri Lurton.

Philippe Melka – Melka Wines “Chateau Lafite Rothschild is the benchmark for Cabernet Sauvignon. There is a sense of seriousness, coupled with the grace and sophistication in the wine.”

Aaron Pott, the owner of Pott Wine, located in the Napa Valley on Mt. Veeder is equally well-known for the wines he makes, the wineries he consults, for example Seven Stones, Blackbird, Fisher Vineyards and Quixote along with his extensive experience at tasting a wide range of wines. Especially older vintages of Bordeaux and California wine.

What are some of the best Cabernet Sauvignon based wines Aaron Potts recalls tasting?

Aaron Pott “Cabernet Sauvignon has few peers in its age-ability. Some of the great Cabernet Sauvignon wines I have tasted over the year range from older vintages of Chateau Latour like 1947, 1949 and 1961 to older Mayacamas made in 1970 and 1974. Also from California the 1969 Chapellet and more recently, 1991 Ridge Monte Bello.”

At its best, Cabernet Sauvignon produces wines with deep, dark colors that offer complex scents and concentrated flavors ranging from blackberries, creme de cassis, black cherries, boysenberry, blueberry and chocolate when young, to fragrances of tobacco, truffle, cedar wood, earth, lead pencil and leather when mature. When the berries are not ripe, distinct aromas of green peppers or olives can be found. The wines can be rich and concentrated, as well as tannic. Cabernet Sauvignon based wines have the ability to age for decades when grown in good soils and allowed ample time to ripen.

Each producer seeks something different in the character, flavor and style of Cabernet Sauvignon based wines. Emeline Borie of Chateau Grand Puy Lacoste, the popular Fifth Growth estate in Bordeaux looks for elegance in the taste of the wine.

Emeline Borie Grand Puy Lacoste – “For us, we look for aromas that include crème de cassis, which is like black currants. When the wine is still young and primary, it needs to be fruity, full bodied, elegant and have a touch of spiciness. Cabernet Sauvignon is mature, the fruit in the wine should become more elegant and velvety, while retaining the black currant character.”