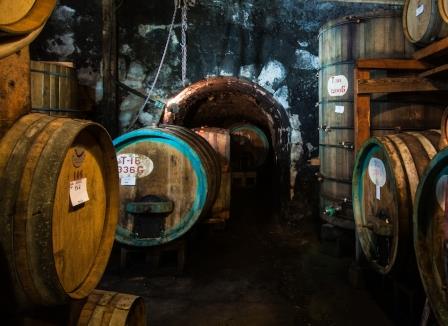 Everything about Mayacamas Vineyards California, Cabernet Sauvignon wine producer profile, wine tasting notes, wine and food pairing tips, best vintages, history of the property, information on their wine making techniques, terroir and soil. You can also read about the Grapes used for California wine and learn about the extensive History of Napa Valley, California Wines

Mayacamas is one of the older vineyard sites in Napa Valley. It was first cultivated in 1889 by John Henry Fisher. John Fisher was responsible for building the original, stone winery. In those early days, the vineyard was planted to a filed blend that included Zinfandel, one of the more popular grapes at the time. The vineyard died out by 1916, and eventually became fallow. The property was sold to Jack Taylor and Mary Taylor in 1941, who replanted the vineyard.

In 1968, the Taylor family sold Mayacamas to Bob Travers and Elinor Travers. Robert Travers did not come from a winemaking background. He learned the trade from Joe Heitz, of Heitz vineyards. Perhaps, due to the influence of Joseph Heitz, Bob Travers began planting Cabernet. Under the direction of Bob Travers, Mayacamas Vineyards produced sublime examples of classic, Cabernet Sauvignon. Few people know, but some of the best wines ever produced at Mayacamas were made without the use of new oak, or modern, fermentation tanks. Many of their best wines were vinified in large, redwood vats! The wines were aged in barrels that could be more than 50 years old. By the time the Travers family sold Mayacamas Vineyards, the cellars were dilapidated and the vineyards needed replanting.

The Mayacamas Vineyards property is a whopping 475 acres. But only 50 acres are cultivated with vines. The vineyard has various elevations ranging from 1,800 to 2,400. The Mayacamas Vineyards are located not far from Sonoma, at the peak of Mt. Veeder. Perhaps their best parcels are planted in the portion of the vineyards known as the Amphitheater Block.

Mayacamas Vineyards is famous for their classic, mountain fruit, style of Cabernet Sauvignon. This is their flagship wine. The wine is made from 100% Cabernet Sauvignon. The property also produces a Chardonnay, “Terraces,” which takes its name from their steep, terraced, hillside vineyard and additionally, they also produce their version of a Bordeaux Right Bank look alike wine wine made from 100% Merlot grapes.

Mayacamas wines are best served at 15.5 degrees Celsius, 60 degrees Fahrenheit. The cool, almost cellar temperature gives the wine more freshness and lift. Young vintages of their red wine can be decanted for 1-3 hours, depending on the character of the vintage. This allows the wine to soften and open its perfume. Older vintages might need very little decanting, just enough to remove the sediment.

The white wine of Mayacamas is best served with all types of seafood and shellfish, sushi, sashimi, chicken, veal, pork and cheese.