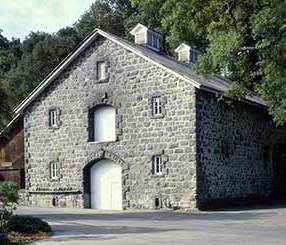 Everything about Heitz Cellar Napa Valley California Cabernet Sauvignon wine tasting notes, wine and food pairing tips, best vintages, history of the property, information on their wine making techniques, terroir and soil. You can also read about the Grapes used for California wine and learn about the extensive History of Napa Valley, California Wines

Joe Heitz was destined for a career in wine, even if he did not always know it. He was one of those people that destiny took a hold of. Joseph Heitz began taking an interest in the wine business during World War II.

Needing money, he found a part-time job with Italian Swiss Colony wines a survivor of prohibition that specialized in packaging, lower, priced wines. From there, Joe Heitz earned a bachelor’s and master’s degree in winemaking from UC Davis.

Armed with his new education, he was quickly hired by Gallo. His next job was at Beaulieu Vineyards where he worked with the already, legendary, Andre Tchelistcheff.

At first, Heitz thought he might one day replace the aging Tchelistcheff, but that was not in the cards, so Joe Heitz went into business on his own, founding Heitz Winery.

The debut vintage for Heitz Cellars was made from the 1959 vintage. The wine was made from purchased fruit. The wine was labeled as Cabernet Sauvignon. By labeled, I mean there was a simple sticker that read, Cabernet Sauvignon, bottled by Heitz Cellar, St. Helena California. The vintage was written by a. After his first vintage, there was no turning back for Joe Heitz. 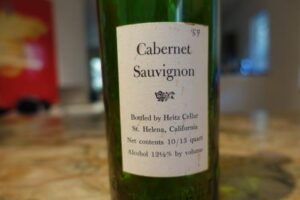 Joe Heitz and Alice Heitz made their first vineyard purchase in 1961, when he obtained an 8 acre parcel of vines for $5,000, right off Highway 29 in St. Helena. The previous owner, Leon Brendel, called the wine, “The One & Only.”

The last remnants of the original winery are used as the tasting room for Heitz Cellar. At the time, the vineyard was planted to Grignolino. In fact, Heitz Cellar stills makes a Grignolino, in honor of their first purchase.

At this point, it is interesting to note, that while Heitz Cellar wines are most often associated with Cabernet Sauvignon, his first success was with Chardonnay. Joe Heitz was known to be a big fan of Montrachet.

To help build his fledgling business, Joe Heitz purchased wines in bulk from other producers, bottling the wine under his own name. That explains why Heitz Cellar sold so much Pinot Noir in their early days. In 1964, Heitz Cellars purchased the Rossi Ranch vineyards.

In 1965, Joe Heitz made the best deal of his life when he arranged to purchase the fruit from the 35 acre parcel of vines owned by Tom May and Martha May, dubbed Martha’s Vineyard. The following year, Heitz Cellar released their first vintage of Martha’s Vineyard.

The 1966 bottling of Martha’s Vineyard is important, as this marks the first time a California winery began placing the name of the vineyard on their wine. Joe Heitz passed away in 2000.

Heitz Cellar continued expanding their holdings with purchases and leasing arrangements. Their next major deal was to buy the fruit from the Bella Oaks Vineyard, which they used as a fruit source in 2007, when the vineyard was bought by the Staglin family.

In September 2020, the Lawrence family added to their holdings in Napa Valley when they purchased Burgess Cellars, located on Howell Mountain. Burgess Cellars is one of the oldest properties in California as it was created in 1880.

Since those initial purchases, and other leasing agreements, Heitz Cellars now owns more than 1,100 acres of land in the Napa Valley! All of their vines are farmed with a self sustaining, organic approach.

Heitz Cellars owns parcels in various appellations in the Napa Valley including, St. Helena, Rutherford, Valley Oak Ranch, Ink Grade Vineyard and Howell Mountain. Of their 1,100 acres of land, about 425 acres are currently cultivated with vines.

Heitz Cellars has the latest release program of any producer in the Napa Valley. The wines are not sold until the estate thinks they are ready to drink, which is often 5, 6 or 7 years after the vintage.

The white wine of Heitz Cellar is best served with all types of seafood and shellfish, sushi, sashimi, chicken, veal, pork and cheese.