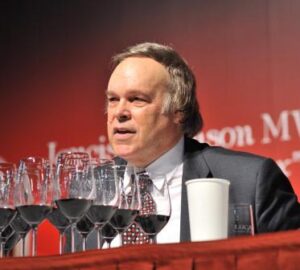 The first annual Wine Future Hong Kong fair drew to close with the now famous Robert Parker Magical 20. The event was headlined by the world’s top wine critic, Robert Parker. For the grand finale, 1,000 people were present to participate in tasting led by Robert Parker of 20 wines from the just bottled 2009 Bordeaux vintage.  The wines presented, dubbed “Robert Parker Magical 20” represent many of the best wines from a stunning vintage.  The list did not feature the First Growths. Instead, the chateaux presenting their wines covered every major Bordeaux appellation from both banks and Pessac Leognan.

Prior to the tasting, Parker held a press conference freely tossing out numerous quotes to thirsty journalists on a myriad of topics including the Robert Parker Magical 20. Perhaps the most interesting was that his star was beginning to wane. After more than 30 years at the top, that was quite a thing for Parker to say. Bob added that now he was just an old, fat happy Buddha that people could come to for wisdom if they desired.  He continued with, that while he was never as important as some people have written, it was good that his influence was not what it once was.  These quotes coupled with other recent comments from Bob about the possibility of retiring in 5 years or so will please some people and leave others feeling nervous.  Regardless of where you stand, the wine world and especially Bordeaux without Robert Parker will be a very different place.

For most of the tasters in the massive crowd, tasting the Robert Parker Magical 20  was their first chance to taste the heralded 2009 Bordeaux vintage. Once people were seated, Bob Parker praised the entire Bordeaux wine region saying, “These are the greatest wines from the greatest wine region on earth!”

The following list of 2009 Bordeaux wines were tasted in the “Robert Parker Magical 20” tasting:

Parker continued to elaborate on the Robert Parker Magical 20  and 2009 Bordeaux vintage with positive comments.  He noted that when he first tasted the 2009 vintage, he wrote about the vintage characteristics with its high alcohol, concentration and sweet tannins. All those characteristics were clearly demonstrated in this tasting. He concluded with stating that what he found even more impressive, now that the wines are in bottle, is the elegance of the 2009 Bordeaux wines and the finesse in tannins. In fact, the tannins were even sweeter and better integrated than he recalled them after his initial barrel tastings. Our comments on the 2009 Bordeaux vintage can be found here: 2009 Bordeaux Wine Buying Guide for the top 200 wines

Bob added that in his view, all great wine shares commonalities. They have the ability to age and develop while offering unique experiences, similar to the best music and art.  Parker’s advice to the crowd of enthusiastic tasters, “Be guided by your own palate”.

Robert Parker’s highest praise for wines from the Robert Parker Magical 20 went to Chateau Cos d’Estournel and Chateau Angelus.  Having tasted both wines multiple times, we agree.  However, Chateau Cos d’Estournel remains the wine to buy.  I firmly believe that wine will hit 100 Pts from Parker and it deserves every single point it receives! But not every taster shares this view. For some tasters, the wine is over the top.  Parker compared 2009 the “thrilling” Cos d’Estournel with the legendary 1947 Cheval Blanc! High praise indeed. If over the top means 1947 Cheval Blanc, (that is what many people said about ’47 Cheval Blanc in its youth when they compared it to vintage Port), all I can say is, give me more over the top wines!

Parker, who picked the wine for The Robert Parker Magical 20 gave high praise to other wines including; Brane Cantenac, which  earned a strong mention for pairing value with quality. Lynch Bages was called a beautiful wine with no hard edges. Pichon Baron is a 40 year wine.  Pichon Lalande could be enjoyed today. Trotanoy is superb and ages as well as Petrus according to Parker. Parker said La Fleur Petrus is pure silk and seduction!

It will be interesting to see how much Parker’s positive, forward comments on the Robert Parker Magical 20 and the 2009 Bordeaux vintage effect sales.  His in bottle report for the vintage is slated for release by December 31. Will consumers start buying wines now, in anticipation of higher scores and even higher prices? Or will they continue to wait?

Wine Future Hong Kong 2011 produced by Pancho Campo MW, President of The Wine Academy of Spain was a resounding success!  The closing tasting with Parker on the Robert Parker Magical 20 was an amazing sight to see! Picture 1,000 people surrounded by an ocean of 20,000 glasses. With each taster being given a seperate glass per wine, 20,000 glasses in a single room deserves a place in “Guinness’s Book of World Records”!  Attendees ranged from the who’s who in the wine world, top sommelier’s and wine lovers from all over the world.  Parker was quoted as saying the Wine Future Hong Kong events will become one of the world’s most important wine conferences and events.  The Robert Parker Magical 20 2009 Bordeaux wine tasting represented the finest set of young wines represented the best young wine tasting ever presented in Hong Kong.

Planning is already in the works for Wine Futures 2013! Stay tuned for details as they happen.