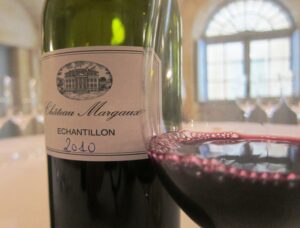 2010 L’Aura de Cambon From an equal blend of Cabernet Sauvignon and Merlot, this soft textured Bordeaux wine is filled with deep, plush, blackberry, dark cherry and spice which feels fresh and clean in the mouth. 89-91 Pts

2010 Bellevue de Tayac Located in the commune of Soussan in Margaux,Jean Luch Thunevin has been in charge of this estate since 2004. From an assemblage of 50% Merlot, 30% Cabernet Franc, a nose of truffle, tobacco and cassis leads into a medium bodied wine filled with jam, soft tannins, chocolate  and cassis that should drink well early. 88-90

2010 Brane Cantenac  introduced many technical improvements with the 2010 vintage, starting with, the Air Tec system, which they used  for the first time. 2010 also marks the debut of the optical sorting machine at the Bordeaux wine estate.  According to Henri Lurton, “The Optical Sorting Machine” was perfect for the difficult Merlot harvest.” Additionally, the estate added 4 small vats allowing for more precise vinification on separate parcels. Lurton credits much of the vintage’s style to the combination of dry weather and cool nights. From a blend of 62% Cabernet Sauvignon, 30% Merlot and 8% Cabernet Franc, the wine reached 13.5% alcohol, which is high for Brane Canenac. With a pH of 3.70, there is no sensation of heat in the Bordeaux wine.  The Grand Vin represents 33% of the harvest.

2010 Brane Cantenac  From a blend of 62% Cabernet Sauvignon, 30% Merlot and 8% Cabernet Franc, the wine reached 13.5% alcohol, which is high for Brane Canenac. With a pH of 3.70, there is no sensation of heat in the wine.  The Grand Vin represents 33% of the harvest.  The wine opens with a delicate perfume of floral, jammy dark berries, cassis, oak and tobacco scents.   Fresh, blackberry, floral, licorice and black cherry flavors, round ample tannins and a sweet, spicy cassis finish are the hallmarks of this wine. This shows more depth and acidity than the 2009. 92-94 Pts

2010 Durfort Vivens From an assemblage of 70% Cabernet Sauvignon, 26% Merlot and 4% Cabernet Franc, (Which is almost identical to the blend in 2009) this medium bodied, soft, cassis and red plum Bordeaux wine is elegantly styled and should drink well within a few years of release. 89-91 Pts

2010 Giscours Produced from a blend of 71% Cabernet Sauvignon and 29% Merlot, this is the highest concentration of Cabernet Sauvignon in the history of the chateau! The harvest produced yields that were slightly lower than they produced in 2009.  That combination created a deep ruby colored wine offering floral, cassis, boysenberry and smoky aromas.  Round tannins, supple textures and more muscle than usual led the way for a long, fresh, Margaux finish of pure, ripe, cassis. 91-93 Pts

According to Alexandre Van Beek, he’s happy with the masculine edge to the wines style in this vintage.  He graciously stated, “Credit goes to their consultant Denis Dubordieu, who began working with Giscours and du Tertre starting with the vintage. “

2010 Le Sirene de Giscours opens with cassis aromas, coupled with a medium body and easy to drink textures, this will be fun to drink on release. 85-87 Pts

2010 Labergorce Deep color, earth, cassis and licorice in the nose. This easy to like Margaux wine should offer pleasure early. 88 – 90 Pts

2010 Lascombes was one of the few estates in the Medoc to use more Merlot in their blend than they included in 2009. With a blend of 55% Merlot, 40% Cabernet Sauvignon and 5% Petit Verdot, the wine is deep ruby with blue, purple accents. On the nose, violets, oak, cassis and forest floor aromas are easy to find.  Concentrated with ripe fruit, cassis, tannin and wood, this plush textured, tannic Bordeaux wine, finishes with chocolate, cassis and coffee flavors. 91-93 Pts.

2010 Malescot St. Exupery Blending 55% Cabernet Sauvignon, 30% Merlot with the remainder evenly split between Cabernet Franc and Petit Verdot, this Margaux wine reached 14% alcohol.  This is not a taste by the numbers wine. There is no sensation of heat in this beauty.  Aromas of tobacco, cigar ash, stone, blackberry and floral scents pop from the glass with little effort.  Mouth coating layers of concentrated, dense, ripe, sweet dark berries, powerful tannins and freshness.  Rich, thick and flavorful, with a boatload of tannin, this Bordeaux wine will require over a decade of time in the cellar.  Pairing high quality, style and price, this merits serious attention.  95-97 Pts

2010 Margaux – A blend of 90% Cabernet Sauvignon, 7% Merlot and equal parts Cabernet Franc and Petit Verdot, the wine is defined in part because of the effective low yields.  Only 38% of the harvest was included in the Grand Vin.  The rest of the harvest was divided as follows. An equal portion of 38% went into Pavillon Rouge. The remaining wine was divided between their third and the new fourth Bordeaux wine. 210 marks what could be the lowest production ever recorded in Chateau Margaux.

Deep ruby on color, with an enticing perfume filled with smoke, cedar, cassis, violets, oak, tobacco, spice and black raspberries.  But that’s not where the excitement is found. In the mouth, pure elegance, silk, satin and velvet, incredibly plush, refined, polished and long, this intensely pure Cabernet Sauvignon based wine remains on your palate for at least 60 seconds.  2010 Chateau Margaux exemplifies precision, purity, balance and elegance with a seamless finish.  Everything is in balance with perfect harmony.  98-100 Pts

2010 Marquis d’Alesme  From an assemblage of  70% Cabernet Sauvignon, 15% Merlot, 10% Cabernet Franc and 5% Petit Verdot, this Bordeaux wine reached 14% alcohol, but there is no sensation of heat in the beautiful Margaux wine.  Deep purple in color, with a perfume of licorice, flowers, earth and sweet dark berries, the full bodied, round textured wine ends with a long, fresh, chocolate covered blackberry finish.  With the efforts of Marjolaine Maurice De Coninck, Delphine Kolasa, new cellars and the hiring of Michel Rolland, this property is experiencing a much needed renaissance.  If prices remain fair, this could be one of the top Bordeaux wines to seek out for a combination of quality and value in the Medoc.  92-94 Pts

2010 Palmer From an assemblage of 54% Merlot, 40% Cabernet Sauvignon and the remainder Petit Verdot, the wine reached 14.5% alcohol. The beautiful, deep, purple color is almost opaque.  Floral aromas are complicated with cassis, coffee, smoke, truffle, earth and boysenberry scents which jump from the glass.  With intense purity, tannins that feel like hand polished silk and a beautiful, pure, long, harmonious rich finish, there is not a hard edge to be found.  This opulent Margaux wine is a treat for the senses. 96-98 Pts

2010 Alter Ego 51% Cabernet Sauvignon and 49% Merlot produce a blend that offers blackberry, floral, cassis and bitter chocolate aromas. Powerful for Alter Ego, the Bordedaux wine ends with a smooth, fresh, refined finish. While the wine reached 14.4, there is no sensation of heat. 91-93 Pts

When asked about the success of the vintage in Margaux Bernard and Thomas shared that in part, the answer comes from the poor soils of the appellation. Also, Margaux is less tannic by nature.  Margaux received about 35mm of rain, which is more than the other regions in the Medoc.  This additional moisture allowed the vines to continue their development which gives the fruit its supple textures and additional layers of sweet fruit.

2010 Rauzan-Segla  – Only 45% of the crop was used in the Grand Vin. Produced from an assemblage of 60% Cabernet Sauvignon, 37% Merlot, 2% Cabernet Franc and 1% Petit Verdot, the Bordeaux wine reached 14% alcohol, which is slightly higher than they achieved in 2009.

Alluring scents of fresh flowers, truffle, cassis and jammy black plums combine with silk and velvet textures to produce an opulent, powerful, sensuous Margaux wine that coats your mouth with sensations of supple tannin and intense purity. When comparing this with the highly regarded 2009, it is not a question of quality or score, it’s a matter of style. The 2009 is more sensuous, while the 2010 offers more power and lift from higher acidity. 94-96 Pts.

Kolasa was worried about the potential alcohol level during fermentation, which caused to take care and not over extract.  After tasting the wine he felt comfortable with how the wine turned out.

2010 Segla –  Cassis, spice and oak scents, soft textures and a fresh berry finish are found in this very strong second wine.  2010 Segla should sell for about $25, which makes it a steal and it will be ready to drink on release.  89-91 Pts

2010 du Tertre  is the product of a blend from 70% Cabernet Sauvignon, 20% Merlot and 10% Petit Verdot. This is unique for the property as they usually include between 10% and 20% Cabernet Franc.  This assemblage created a perfume of tobacco leaf, fresh herb, and blackberries.   This elegant, medium/full bodied Margaux is filled with sweet cassis, ripe tannin, floral sensations ending with soft textures and ample freshness in the finish. 90-92 Pts