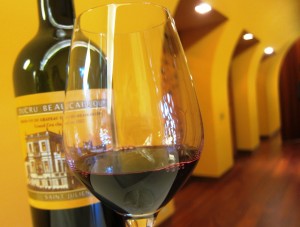 2010 Beychevelle  A blend of 54% Cabernet Sauvignon, 38% Merlot, 5% Cabernet Franc and 3% Petit Verdot create a structured, masculine, four-square styled wine dominated by fresh, ripe, cassis notes. This old school style of Bordeaux wine will please some tasters more than it did me.  89-91 Pts

2010 Branaire Ducru From an assemblage of 70% Cabernet Sauvignon, 23.5% Merlot, 4% Petit Verdot and 2.5% Cabernet Franc, (Similar to the 2009) the wine sports a deep ruby tint.  Jammy black raspberry, spice and hints of toasty oak start off the perfume. In the mouth, fresh cassis, mocha, olives and spice combine with strong, ripe tannins, ending in a blackberry filled finish.  This Bordeaux wine reached 13.8% alcohol, which is higher than they recorded in 2009.  Due to the high level of acidity, there is no sensation of heat.  According to the owner, Patrick Maroteaux, one of the keys to the success in 2010 is due to their new method of handling the press wine. This includes ageing the press wine in one year old barrels and utilizing more selection in the press wine. 40% of the press wine was allocated to the Grand Vin. The remainder was included in the second St. Julien wine. 93-94 Pts

2010 Ducru Beaucaillou Produced from a blend of 90% Cabernet Sauvignon and 10% Merlot, the St. Julien wine reached 13.95% alcohol. Inky purple in color, cassis, truffle, cedar, spice, oak, mocha and fennel aromas are found with little coaxing.  Polished, powerful, long, fresh, pure and clean, the layers of chocolate covered black cherries resonate in the finish. This regal Bordeaux wine remains on your palate for close to 50 seconds.  The wine will be aged in 95% new oak for 18 months.  96-98 Pts

2010 Croix de Beaucaillou is a blend of 85% Cabernet Sauvignon and 15% Merlot. 2010 marks the debut for the new label promoting the estates efforts to market this brand as a unique Bordeaux wine, and not a second label of Ducru Beaucaillou. According to Bruno Borie, the reason for this is; the St. Julien wine emanates from a different terroir than the Grand Vin.  Cassis, plums and anise scents lead to a wine offering juicy ripe plums and hints of coca. Fresh, clean and polished, this is a strong effort for Croix de Beaucaillou.  The wine is going to be aged in 60% new oak for about 12 months.   91-93 Pts

2010 Lalande Borie – Produced from a vineyard purchased from Lagrange in the 70’s, this soft, pleasant, easy to like and appreciate, blackberry and black cherry filled wine should offer pleasure on release.  89-90 Pts

2010 Fourcase Borie, formerly sold under the name of Fourcas Dumont is a new wine from Bruno Borie of Chateau Ducru Beaucaillou.  Filled with juicy ripe, spicy cassis, blackberry and earth, this round, charming, crowd pleasing Bordeaux wine will offer a lot of bang for the buck in the under $20 category. 88-90 Pts

2010 Gruaud Larose  With yields of 40 hectoliters per hectare, the property produced a wine blending 61% Cabernet Sauvignon and  20% Merlot with the remainder evenly split between Cabernet Franc and Petit Verdot. This St. Julien wine reached 13.8% alcohol in 2010, which is slightly higher than they achieved in 2009.  Ruby colored, with scents of cassis, oak and gravel, this full bodied, brawny, beefy, traditional and tannic Bordeaux wine has some dryness in the finish.  91-93 Pts

2010 Leoville Barton – Deep ruby with purple accents,  cassis, earth and  spice aromas open to a big mouthful of juicy, chewy, tannic, cabernet sauvignon.  While tannic and broad shouldered, the tannins are soft and round. This is one of my favorite vintages of Leoville Barton.  Like all the estates St. Julien wines, this Bordeaux wine will age well and it should be accessible earlier than 2005. 94-96 Pts

2010 Leoville Poyferre From an assemblage of 61% Cabernet Sauvignon, 30% Merlot, 6% Petit Verdot, along with 3% Cabernet Franc, this St. Julien wine reached 14% alcohol. Even at this degree of alcohol, there is no feeling of heat.  Smoke, earth, jammy dark berries and cassis scents produce the aromatics.  This fresh, chocolate covered cassis filled wine is big and almost brawny in style. Its beefy tannins and low pH combine freshness and power which are made better by the long cassis filled, powerful finish.  According to Didier Cuvelier, 2010 reminds him of 2005.  I see his point. But for me, 2010 is a more powerful Bordeaux wine, while 2005 offers more elegance and charm.93-96 Pts

2010 Saint-Pierre From a blend of 78% Cabernet Sauvignon and the remainder Merlot, this deep, ruby colored wine shows a cassis, oak,  floral, spice and jammy black raspberry nose. On the palate, the tannic, concentrated, sweet, jammy black cherry and licorice wine shows freshness, but the tannins feel dusty in the finish.  The Bordeaux wine will be aged in 55% new oak. 92-94 Pts