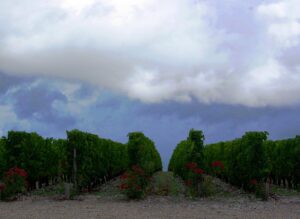 The 2011 Bordeaux harvest  is getting off to an inauspicious start for chateaux located near the Pauillac, St. Estephe border and close to the Gironde river. Friday, September 2, at close to 11 in the morning,  a massive storm slammed into the area with torrential rains which were accompanied by fericious hail.

Reports are circulating that over half an inch of rain fell in a 20 minute period!  The rain drenched the vineyards.  Fortunately, the hail seems to have caused more damage to the leaves than the berries or the vines. The full extent of the damage is not known.  Up to 1000 hectares of Bordeaux wine vineyards could be effected.

Jean-Guillaume Prats of Chateau Cos d’Estournel said, “It is too early to know the exact effect of the storm. Yields will be lower. But fortunately, most of the damage was relagated to the leaves and not the fruit or vines.”

Several properties in the St. Estephe appellation could have sustained damage. Chateau Montrose, Chateau Cos Labory, Chateau Calon Segur, Chateau Les Ormes de Pez and Chateau Tronquoy-Lalande are all located in the vicinity of the storm, which seemed to be centered on the Cos plateau. St. Estephe was not the only appellation in the Medoc that suffered damage from the storm. According to Jean-Emmanuel Danjoy of Chateau Clerc Millon, their vineyards were not hit by the storm. But it was a close call. Danjoy shared that vines as close as 400 meters away were hit hard.

Estates located in the northern areas of Pauillac also sustained damage.  Chateau Lafite Rothschild, which is located next to St. Estephe and has vineyards that were once part of St. Estephe was hit the hardest.   Chateau d’Armailhac and even parts of vineyards owned by Chateau Mouton Rothschild could also be effected.

Aside from lower yields, due to the possible development associated with the onset of botrytis in the Cabernet Sauvignon and Merlot, harvesting will begin earlier than expected at numerous Bordeaux estates.

Bordeaux is not the only viticultural area to be hit hard by recent hail storms.  A powerful storm wreaked havoc in the middle Mosel the same week.  Severe damage in the vineyards was reported from Bernkastel to Brauneberg, although the storm appears to be centered on Mühlheim.  Wine can far too often appear to be a luxury product.  It’s easy to forget that it’s an agricultural product that is subject to the whims, and capricious vagaries of Mother Nature.
.
Nature has also played a role in vineyards located on America’s eastern coast. Hurricane Irene plowed into vineyards located up and down the eastern seaboard, causing severe damage to vineyards located in  New York, Virginia, New Jersey and North Carolina.  The full extent of the problems are not yet known. Alth0ugh most producers expect only minor, storm related problems.