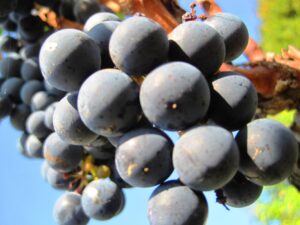 Chateau  Lafite Rothschild started to harvest Cabernet Sauvignon in their northern most parcels, located not far from Chateau Cos d’Estournel, Friday, September 2.  2011. This is on one of the earliest harvests on record for the property.  You’ll be reading quotes from many Bordeaux wine producers that 2011 Bordeaux, for many chateaux will be their earliest harvest on record since 1893! However, growers situated in some parts of Bordeaux have moved up their time tables are harvesting even earlier than they previously expected. For the 2011 Lafite Rothschild was forced to pick some plots early.
.
Due to the massive, freak, hail and rain in barrage the Northern Medoc, centered near the Pauillac , St. Estephe border, to avoid possible problems with the onset rot, many chateau in that vicinity have decided to start picking earlier than they had originally planned on.  The most notable property is the famed First Growth, Chateau Lafite Rothschild.  It is possible that the storm, which dropped over a massive, half inch of rain in a twenty minute period caused some flooding to the cellars of Lafite Rothschild.  The famous Bordeaux marathon, which usually runs through the property of Lafite, might be rerouted this year, due to the heavy flooding.