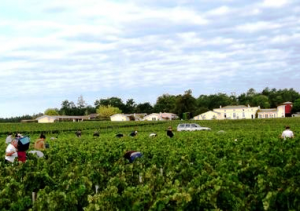 Olivier Bernard said the early start for the 2011 Domaine de Chevalier was due to the very warm and dry spring. The vines were helped with some much needed moisture when they received rain at the right moment. It rained twice in July. The rains arrived at the right moment. The rain at that time helped speed up the ripening process. Summer rains can be a problem in Bordeaux. Heat and moisture could lead to the development of rot if precautions are not taken in the management of their Bordeaux wine vineyard.

When asked how they avoided rot in this season for 2011 Domaine de Chevalier.  Bernard commented, it was a combination of  things. First,  the even distribution of the bunches on the vines helped. Next, they also practiced leaf thinning. While some fruit could develop rot, the issue is abated by careful hand sorting, which is the long time practice of the chateau.

Starting next week, the Pessac Leognan estate will continue harvesting additional plots of Sauvignon Blanc. They will pick the Semillon once the Sauvignon is finished being harvested for 2011 Domaine de Chevalier.

When asked about further developments, Bernard and his staff replied, it’s up to the weather and  how well the grapes are ripening. Time will tell…