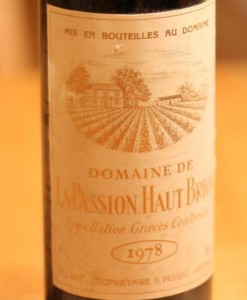 Learn everything about Domaine Allary Haut Brion Graves, Pessac Leognan, Bordeaux wine producer profile, wine tasting notes, and wine and food pairings. Learn about the best vintages, the history of the property, vineyards, winemaking, and wine tasting reviews. If you want to read about other important, Bordeaux Chateaux: Links to all Bordeaux Wine Producer Profiles

The Touraille family bought the small parcel of vines for what would become La Passion Haut Brion in 1918. In the early days of the estate, the wine was bottled and sold as Haut Brion La Passion.

The first of two lawsuits over the name forced the estate to change the name of the wine to La Passion Haut Brion to avoid confusion in the marketplace. Eventually, the Touraille family passed down the vineyard to the Allary family.

Following World War 2, in 1948, the Allary family made an arrangement with the owners of Haut Brion to allow Haut Brion the right to produce wine from the vines belonging to the Allarys. In return, the Allary family received 1.350 liters of Chateau Haut Brion. This was later adjusted to one and a half barrels of wine, which is close to 36 cases of Bordeaux wine.

The only difference between the wines was the label. To understand this, you only need to recognize that it would not be possible for a large, First Growth estate making thousands of cases of wine per year to produce a few hundred cases of a separate, unique wine. 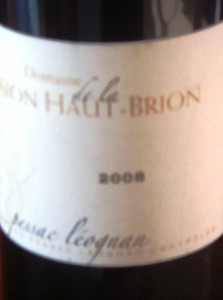 Due to a change in the EU laws that expressly forbid the making of different wines being made in the same facilities, if they were owned by different entities, the wine of La Passion Haut Brion from that point forward was blended into the Second Wine of Haut Brion, Bahans Haut Brion.

In turn, the Allary family was paid rent in bottles of Haut Brion for the use of their vines which amounted to about 40 cases per year. From 1979 until 2007, the fruit from La Passion Haut Brion continued to be placed into Bahans Haut Brion.

At this point in time, a lawsuit was filed, which produced a court order in 2006. That verdict awarded the Allary family the return of their 1.3-hectare parcel of vines. At the time, close to 9,000 vines were owned by the Allary family. Many of those vines were planted in 1982.

A non-commercial harvest took place in 2007. In 2008, the owner tried bringing back the original brand name of the Pessac Leognan estate. However, he was ordered to cease and desist from using the name La Passion Haut Brion by the courts. The wine is now labeled and sold under a new name, Allary Haut Brion. Allary is the original family owner’s last name.

The tiny 1.3-hectare vineyard of Allary Haut Brion is planted to 60% Cabernet Franc and 40% Cabernet Sauvignon. Located in the heart of the Haut-Brion vineyard, the vines are planted to a high density of 9,240 vines per hectare. The average age of the vines is 38 years. 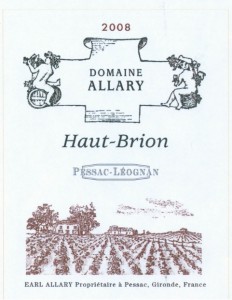 To produce the wine of Allary Haut Brion, the grapes are whole berry fermented in oak tanks. Maceration time, interspersed with regular pigeages, runs 30 days. Malolactic fermentation takes place in 50% new, French barrels with aging and stirring of the lees for the first three months.

The wine is aged in 50% new, French oak barrels from Taransaud for between 14 to 16 months. Production is estimated at 5,000 bottles of Allary Haut Brion wine per year. Stephane Derenoncourt and his able team consult Domaine Allary Haut Brion on their winemaking and vineyard management.

Domaine Allary Haut Brion is usually better with 5-12 years of bottle age. Of course, that can vary slightly, depending on the vintage character. In the best vintages, the wine will be at its best between 8-20 years of age after the vintage. Young vintages can be decanted for an average of 1-2 hours give or take. This allows the wine to soften and open its perfume. Older vintages might need very little decanting, just enough to remove the sediment.

Domaine Allary Haut Brion is a perfect match with Asian dishes, hearty fish courses like tuna, mushrooms, and pasta as well as cheese.

In a deal that closed in September 2012, the holdings of Domaine Allary Haut Brion were sold to the owner of Chateau Haut Brion. Only 4 vintages of this unique wine were produced, 2008, 2009, 2010 and 2011. The final vintage of Allary Haut Brion was in 2011. At least for now, the vines are used in the production of Le Clarence de Haut Brion, the second wine of Haut Brion.