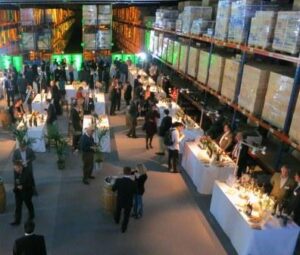 It’s almost time for the 2015 Bordeaux En Primeur tastings to come to a close. Although other journalists and tasters will be n the area for the next few weeks, today marks the official conclusion. Everything started off the week of Monday, April 4. That was the day thousands of wine merchants, journalists, wine collectors and more than a few tourists made their way to Bordeaux for what has become the most important barrel tasting event in the world. With all the positive early talk about the 2015 Bordeaux vintage taking place, due to the 2015 Bordeaux Growing Season and Harvest there is already excitement about the vintage. The band is playing a tune that people are once again interested in listening to. That is something that has not happened since 2010. The opening number got the crowd on their feet, but what happened next is what formed a lasting impression.

There were a couple of side shows to the week of tasting the 2015 vintage, with Michel Rolland declaring wine writers had no balls. I cannot begin to count how many self annointed Bob Parkers were in Bordeaux this week. Newsflash, none of you are going to take his place. Bob Parker was not even here and was still more important than all the other tasters in town! There was a minor dust up about blind tasting barrel samples that went no where fast. Folly of blind tasting barrel samples The sad passing of Paul Pontallier left a dark patch on the week as he was truly missed by everyone. Paul Pontallier remembered

If you have not tasted the wines, and most people have not had the chance, I want to point out that 2015 Bordeaux is the best vintage in 5 years is not saying that much when you think about it. While there have been some very nice wines produced over the past 5 vintages, there has not been any really great wines or vintages. But there is no doubt about the quality of 2015 Bordeaux and there were throngs of people that swarmed Bordeaux like locusts attacking a cotton field to taste the wines. If you have not attended En Primeur tastings in Bordeaux, it’s quite the scene with people running from tasting to tasting and chateau to chateau seeking a sniff, swirl and sip of the wines they are interested in. To say it can be a bit of a madhouse is quite the understatement. For a curious wine lover, there is really nothing like it. So, what are these wines like anyway.

They are mixed in the Left Bank. That does not mean nice wines were not produced. Some stunning 2015 Medoc wines are going to be available. Pichon Lalande made their best wine in 20 years! There are other strong wines from Pauillac and St. Julien. St. Estephe is much more difficult. Margaux is stunning with many estates making their best wines in the history of the estate!

Pessac Leognan is sparking discussion, due to the richness and alcohol level of the wines. I love most of the wines, but others disagree. In The Right Bank, this is where the action for 2015 really takes place. There are so many stunning wines from Pomerol and St. Emilion, it is easy to lose count. The wines are rich, sensuous and hedonistic, with freshness and hedonistic characteristics!

More than just is an important vintage for the quality and style of the wines will matter this week. The region is well of aware of the Bordeaux bashing and consumer revolt over the futures system. That is what makes 2015 Bordeaux important. 2015 is the first vintage since 2010 that has the potential to sell through to consumers as a future. Note, I said potential, because few people have tasted many wines yet, and until the wines are priced, offered and either sold, or unsold, it’s too early to know what will take place.

I’m sure you’ve read a few of the obituary columns written about the demise of the futures system as well as the demise of Bordeaux. Bordeaux is not going anywhere. The wines still set the benchmark for quality and style. I am also not willing to write off the continuing success for futures quite yet either. But 2015 Bordeaux is going to be a strong indicator if there is a marketplace for buying Bordeaux wine En Primeur on a going forward basis.

This could be the year where the fat lady sings, or not. The reason for this is simple. Customers purchasing the majority of wines as futures from 2010, 2011, 2012, 2013 and 2014 have lost money, or barely broken even. That’s a bad deal for consumers. There has to be a reason to buy wine early. High quality wine is not enough. The prices will need to be in lockstep with today’s marketplace if the chateaux hope to continue selling En Primeur. The tasting notes and scores from professional tasters and others with websites like ours will inform buyers about the wines, but that is only going to go so far. Consumers, who are the end users and purchasers of the wines deserve a reward for buying early. As a consumer, else, why do it? It would make better economic sense to buy the wines when they are physically available. Hopefully, there will be a strong incentive for buying futures that will take place with 2015 Bordeaux.

2015 Bordeaux is the first strong vintage that Robert Parker has not tasted. There were some very fine wines made in 2014, especially in the Northern Medoc. But the loss of the role played by Robert Parker into the success of futures campaigns on a going forward basis is a big deal. There is no other taster that will ever exert anywhere close to that level of influence in his unparalleled ability to move the entire Bordeaux market. The writers thinking they are going to equal or even approach the power of Robert Parker in their dreams should wake up and apologize. It is not going to happen. The world does not want, or need that to take place. The loss of his voice will make a dent in the futures campaign.

On the bright side, the Euro continues to remain weak against the dollar. And the truth is, Bordeaux is still the world’s most important, collectible wine region in dollars and volume. There is a lot at stake for the chateaux, negociants, wine buyers and customers to get 2015 Bordeaux priced right. That does not mean the wines won’t sell when they are physically available at retailers. I think they will. But if the wines are not priced right, they might not trade hands as futures. And as that’s the name of the game, if everyone wants the game to continue, they need to make the right moves.

it’s time to put down my pen, hop off my soapbox and go back to tasting more 2015 Bordeaux. It is my last day in the region and I have a busy day ahead of me. My fingers are crossed that the system, that means the chateau, negociants and brokers listen to the market and get it right.