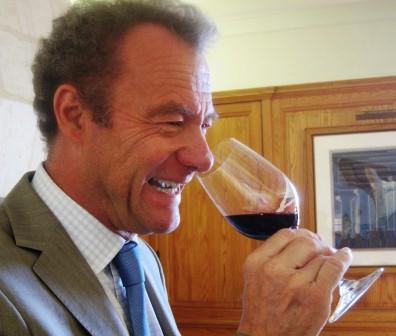 This has been a bad week for the wine world. First Henri Bonneau from Chateauneuf du Pape and now Paul Pontallier of Chateau Margaux.

Paul Pontallier will be missed by everyone. He was almost as well well-known at Margaux as the famous chateau, having been installed at Margaux since 1983. Paul Pontallier was one of the rare, universally liked people. He was always upbeat, cheery and straight-forward. He was truly quite dapper all of the time . In many ways, the wine of Chateau Margaux and Paul Pontallier shared much in common, starting with the fact that both were quintessentially elegant.

More than just refined, if you asked a direct question, he was ready with a straight forward answer. Paul Pontallier was always more than polite, but he was never shy with his opinion. Tasting the 2015 Bordeaux vintage at Margaux will not be the same without Paul Pontallier. In fact, we were set to have lunch Tuesday, March 29. Knowing he had been ill for a while does nothing to soften the blow. It still hurts.

Just a few months short of his 60th birthday, Paul Pontallier was involved with wine most of his life. Born April 22 1956 he came from a wine background as his family owned vineyards in Sauternes and Chateau la Loges Saint Leger, a Bordeaux Superieur.

Paul Pontallier studied at Montpellier and also earned a graduate degree in oenology at the University of Bordeaux. He wrote his thesis on how barrel aging effects the wine during and after the elevage. Little did he know at the time how much that paper would change his life. Paul Pontallier did not set out to have a career in wine. But like many people, he followed his passion which initially took him to Chile where he taught Enology at a Catholic University. Corinne Mentzelopoulos brought Paul Pontallier into Chateau Margaux in 1983, on the recommendation of Emile Peynaud. In just 7 years, Paul Pontallier was named the managing director of Chateau Margaux, replacing Philippe Barre. That was quite an accomplishment to be named the director of a Left Bank estate, let alone a First Growth at only 33 years of age.

Corinne Mentzelopoulos obviously had good instincts. They enjoyed a close working relationship for decades. In part, perhaps because they were both young, in fact they were the same age, you could say they had each others back. This was quite important because Corinne had just assumed control of chateau Margaux. So there was a lot at stake for everyone involved. Corinne Mentzelopoulos and Paul Pontallier worked hand in hand for decades.

I still remember the first time I met Paul Pontallier more than a decade ago. I was invited to Chateau Margaux for a lunch. He walked over to me and said, “We have not met yet. But so many people called before you came saying we should meet, I knew we will be good friends from now on.” And we were! Spending time with Paul Pontallier was a treat. He always made you feel like you were the most important person in the room. He was extremely well read and enjoyed reading about history in his few moments of spare time.

In 2015, under the direction of Paul Pontallier, Chateau Margaux completed a massive renovation of their cellars. The project, headed by the Pritzker prize winning architect Lord Norman Foster, was the first substantial modernization of the famous cellars of Chateau Margaux since the original cellars were constructed in 1810! The stated goal was to maintain the integrity of the original design of the outward appearance, while creating a modern, state of the art facility for the interior. It worked perfectly! There is a new building that is being used for the production of the red as well as the white wine of Chateau Margaux. A new grape reception was added. There is also a new laboratory, and the famous bottle library was also completely updated and redesigned. Part of that update included a new glass walled, tasting room overlooking the historic wine bottles being stored at the chateau.

The inauguration of the just completed renovations took place last year during Vinexpo. The design for the new cellars was an instant hit, as was the incredible tent used to host several hundred guests for the dinners. Tent was not the right word according to Paul Pontallier. I remember him saying it better described as temporary architecture.

It’s going to be a big loss for all of Bordeaux during this year’s futures campaign. I think I speak for many people when I say, Paul Pontallier will be missed by everyone. He leaves behind some very big footprints that will be very hard to fill.

It will be difficult to taste at Chateau Margaux without thinking of Paul Pontallier. We have shared countless bottles of wine, stories and meals together. I will make sure the next time I open a bottle of Chateau Margaux, I will toast you.