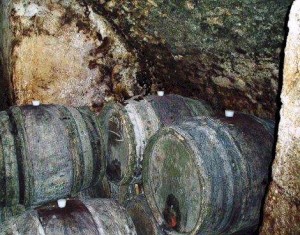 Learn everything about Domaine Henri Bonneau, Chateauneuf du Pape with wine tasting notes, wine, and food pairing tips, best vintages, a history of the property, and information on the vineyards and winemaking. If you want to read about other important wineries and winemakers from the Rhone valley: Links to all Rhone Valley Wine Producer Profiles

His cellars, where he practiced his craft were the most difficult appointment to get in Chateauneuf. They are also the most interesting cellars and caves in the region. Henri Bonneau is old, the estate is even older. Vines were first planted in their vineyards as far back as 1667!

Entering the wine cellar of Henri Bonneau is like walking into another world. To enter the home of Mr. Bonneau, which is a modest, multi-tiered house, located in the middle of the Chateauneuf du Pape village, across the street from a Church. You pass through the only thing that is close to modern in his house, the Art Nouveau-styled door.

Keep in mind, Art Nouveau is from the 1920s! When you walk to the cellars around the back, you pass through a semi-dilapidated, rusty creaking iron gate and make your way down some dangerous-looking, broken steps.

The floors are so dirty, your shoes stick to the ground as you walk. There was mold and mildew in the cellars current medical science has not yet found names for yet. The youngest barrel in the cellar is at least a decade old. Many of the barrels look as if they are as old as Henri Bonneau is, or even older! Henri Bonneau was born in 1938.

Rustic does not begin to describe the caves, walls, or barrels. Barrels are scattered in a myriad of different small rooms, closet-like spaces, and tiny caves. The best description I can offer about the caves is they are like a spider web of ancient, decrepit, catacombs. The lighting is accomplished with a few dangling light bulbs on wires, carelessly strung across the low rocky, ceiling.

Henri Bonneau learned the art of winemaking, the old-fashioned way. The skills were passed down from his grandfather to his father, to Henri Bonneau who also passed them to the next generation headed by his son Marcel Bonneau. In fact, Henri Bonneau was the 12th generation of winemakers in his family line.

Sadly, in March 2016, Henri Bonneau passed away at 78 years of age. Following his passing, the son of Henri Bonneau, Marcel Bonneau was placed in charge of the estate. Marcel Bonneau took full control of the winemaking starting with the 2016 vintage. 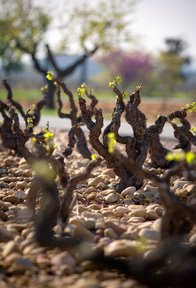 It’s possible that Bonneau has barrels in their cellars that are older than their vines and Henri Bonneau. While most producers in Chateauneuf du Pape feel their best wines come from their oldest, low-yielding vines, that is not the case at Henri Bonneau.

Henri Bonneau owns 6.5 hectares of vines spread among 13 different parcel in the Chateauneuf du Pape appellation. Most of his vines, approximately 90% are devoted to Grenache. The remainder of their vineyards is planted to a mix of Mourvedre, Syrah, Vaccarese, and Counoise.

The vines here are not as old as you might think. While the average age of their vines is between 30 and 40 years, many of their older vines were only planted in 1964. The majority of vineyards in Chateauneuf du Pape are prized for their old vines, meaning vines that are more than 100 years of age.

That is not what takes place at Bonneau, as most vines are replaced by the age of 50. The best terroir of Bonneau is their vines located in the rocky soils found in the La Crau lieu-dit. Bonneau also owns vines in Courthezon.

Henri Bonneau feels that after 50 years, a vine is not the same. For that reason, Henri Bonneau does not desire to have the oldest vines in the appellation. On the other hand, Henri Bonneau is often one of the last producers to harvest his grapes each vintage. The berries are only destemmed in moderate or poor vintages, as they probably did not achieve the desired level of phenolic ripeness.

To produce the wine of Henri Bonneau, the whole berry cluster fruit goes through alcoholic fermentation in traditional concrete vats. At some point in time, the press wine is blended with the must and aged in a combination of 20 hectoliter foudres, demi-muids, and small, crust, moldy looking, oak barrels for 2, 3, 4, 5, 6 years or more! Henri Bonneau is fond of saying the wine is ready when it’s ready.

The decision of what juice goes into which wine is not made right away either. It could take years until he decides if a wine is fit to be sold as Celestins, Marie Beurrier or his Henri Bonneau Chateauneuf du Pape. Because of these potential changes, one never knows when, or if any specific wine will be produced or not, or how many bottles can or will be made in any year.

It’s important to note that everything changes from vintage to vintage at Henri Bonneau. That is all part of the reason the wines are so good. For some unknown reason, the younger vintages of Henri Bonneau have fallen slightly from their previous mythical status with Chateauneuf du Pape collectors.

This is good news because it’s helped keep the prices down to some extent. While the wines are pricey, especially for older vintages which can sell for over $1,5000 in some vintages, due to their unique character and incredible ability to age and evolve for decades, they are worth it.

I have heard from older friends that pre-1978 wines from Henri Bonneau are stunning. But they are impossible to find. In fact, I have never even seen a bottle! Speaking of old bottles, while mature bottles of Henri Bonneau have always been difficult to find and expensive, by 2021, older vintages exploded in price, making them the second most expensive wine in the appellati0on just after Rayas!

Henri Bonneau Chateauneuf du Pape – From a blend of 90% Grenache and 10% Mourvedre as well as small portions of Syrah, Counoise, Vaccarese. The grapes are not destemmed, except in moderate or unripe vintages. Vinification takes place in traditional, concrete tanks. The wine is aged in a combination of old foudres and old as well as older French oak barrels for between 3 to 5 years. Every vintage is different and unique.

Henri Bonneau Marie Beurrier made its debut with the 1988 vintage. The wine, Marie Beurrier takes its name from an aunt of Henri Bonneau. The blend is made from 90% Grenache and 10% Mourvedre, give or take as small portions of Syrah, Counoise, Vaccarese can also be included, or not.

The grapes are not destemmed, except in moderate or unripe vintages. Vinification takes place in traditional, concrete tanks. The wine is aged in a combination of old foudres and old as well as older French oak barrels for between 3 to 5 years. Every vintage is different and unique.

Henri Bonneau Reserve des Celestins, the most famous and expensive wine of the Domaine made its debut in 1927. The wine is a blend of about 90% Grenache, with varying percentages of Mourvedre, Syrah, Counoise, Vaccarese. The grapes are not destemmed, except in moderate or unripe vintages.

Whole cluster vinification takes place in traditional, concrete tanks. The wine is aged in a combination of old foudres and old as well as older French oak barrels for between 3 to 5 years, or even longer in some vintages. Every vintage is different and unique. Bonneau Celestins is a selection of the best barrels that are made in only the top vintages. That explains why Henri Bonneau Reserve des Celestins is not made every year.

Henri Bonneau needs time in the cellar before it can truly be appreciated. If you’re going to drink the wine young, you can decant for 2-4 hours. This allows the wine to soften and open its perfume. Older vintages might need very little decanting, just enough to remove the sediment.

Henri Bonneau is usually better with 4-10 years of bottle age. Of course, that can vary slightly, depending on the vintage. In the best vintages, the wine should be consumed within 9-35 years after the vintage.

Henri Bonneau also makes wine from 3.5 hectares of vines located in the Laval Saint Roman Gard, and a Les Rouliers, a Vin de Table wine, that is made from a blend that is mostly Grenache.

Along with Beaucastel Hommage Jacques Perrin, the wine of Henri Bonneau Celestins, has the potential to age and develop for the longest period of time of any wine from the entire Southern Rhone Valley.