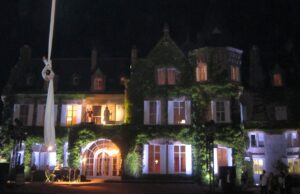 Chateau Lascombes, a Second Cru Classé from the Margaux  appellation in Bordeaux has been officially sold. During the 2011 Vin Expo Fete de la Fleur celebration, rumors were rampant an official offering had been made and accepted. When asked, the director Dominique Befve offered us no comment.
.
It’s rumored the deal was for 200 million Euros, which is close to 300 million US Dollars!The estate is one of the largest producers of Bordeaux wine in the Margaux appellation. Chateau Lascombes offered their 2010 wine in June for 72 Euros per bottle. That price is 20% more than they charged for their 2009.
The Bordeaux wine producing property owned by the investment group Colony Capitol has been for sale since 2007. The winning bid was accepted from a French company. Colony Capitol purchased Chateau Lascombes in 2001 for 70 million Euros, about 67 Million US Dollars from the British brewing company, Bass Charrington. It is assumed that Colony Capitol spent close to 35 million Euros on improving the property over their decade long ownership of the property. Bass Charrington purchased the estate from Alexis Lichine in 1971. Lichine owned the chateau since 1952.
After the purchase by Colony Capital in 2001, they invested heavily in modernizing Chateau Lascombes, which had been considered an underperformer in relation to its Second Growth classification. With the help of consultant Michel Rolland, who replaced Dr. Alain Raynaud, the wine being made today is a major step up in quality from what the Chateau released in the early 90’s, 80’s and 70’s etc.
The vineyard area comprises 84 hectares (210 acres) and is planted to 50% Merlot, 45% Cabernet Sauvignon and 5% Petit Verdot. The château annually produces close to 250,000 bottles of the Grand vin and 70,000 bottles of the second wine Chevalier de Lascombes.

In 2008, it was reported that Chateau Lascombes had rented vineyards belonging to Château Martinens, a former Cru Bourgeois, which had 28 hectares (69 acres) of vineyards within AOC Margaux plus 25 hectares (62 acres) of Haut-Médoc AOC. Classified growths are allowed to expand their vineyard holdings without losing their classification, but only with vineyards from the same appellation as their own.

This could change how Bordeaux wine vineyards are valued as well as factor into the price of future vintages of Bordeaux wine as well.