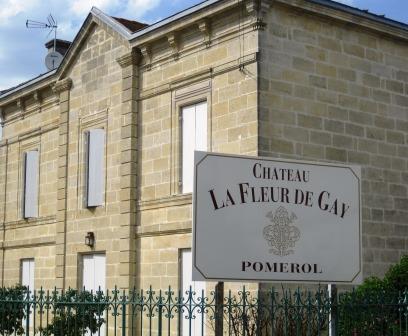 Learn everything about Chateau La Fleur de Gay Pomerol with wine tasting notes and wine with food pairing tips. Learn the best vintages, a history of the property, information on vineyards and winemaking. If you want to read about other important, Bordeaux Chateaux: Links to all Bordeaux Wine Producer Profiles

However, the first true vintage for the wine was made the following year in 1983. It took until 1988 for the wine to truly begin to hit its strides.

The initial vintages contained a small portion of Cabernet Franc in the blend. That soon changed. They stopped blending in any Cabernet Franc and from the mid-1980s. From that point forward, the wine was made from only 100% old vine Merlot.

Prior to 1982, the grapes used to produce Chateau La Fleur de Gay were always placed into La Croix de Gay. As I mentioned, the vines are old. In fact, many of the vines used for this Cuvee are over 50 years of age.

The Raynaud family also owned Chateau Faizeau in the satellite appellation of Montagne St. Emilion, but they sold that estate as well along with a portion of their Chateau La Croix de Gay vineyard in two separate transactions.

Chateau La Fleur de Gay is planted to 91% old vine Merlot and 9% Cabernet Franc. This is different than the original plantings which started out as 100% Merlot. The vines are planted in a specific, small, 2-hectare portion of the best parcel that belongs to Chateau La Croix de Gay.

The terroir is mostly gravel with clay soils on slopes that rise to 38 meters at their peak. Chateau La Fleur de Gay has very good neighbors. The Right Bank chateau is not located far from Chateau Clinet or LEglise Clinet on the edge of the Pomerol Plateau.

However, the parcel of vines is not next to the chateau, it is slightly closer to the center of the plateau. The vineyard of Chateau La Fleur de Gay is planted to a vine density of 6,000 vines per hectare.

To produce the wine of La Fleur de Gay, the wine is vinified in 2 concrete vats that vary in size, with one vat being 170 hectoliters and the other is slightly larger at 190 hectoliters. The wine is aged in 100% new, French oak barrels for an average of 18 months before bottling.

In select vintages, La Fleur de Gay can be a decadently, styled Bordeaux wine. Dr. Alain Raynaud, the noted consultant had a major hand in producing the 1989 and 1990 vintages. Both vintages remain the finest wines this estate has made yet, although 2009 should give them a run for their money.

Alain Raynaud left the estate and pursued other ventures on his own, as the proprietor of Chateau Quinault L’Enclos, and as a consultant to numerous Bordeaux chateaux.

In June 2012, the owners of Chateau Lafite Rothschild purchased a large parcel of vines from La Croix de Gay that allowed them to expand their Pomerol property, Chateau LEvangile. With the consummation of that sale, Dr. Alain Raynaud was no longer associated with his family in either Chateau La Croix de Gay or Chateau La Fleur de Gay.

The style and Character of Chateau La Fleur de Gay

In the best vintages, La Fleur de Gay expresses pure silk and velvet. Layers of dark plums, chocolate, spice, truffle, and opulent textures make this an outstanding Bordeaux wine. However, the wine lacks consistency. In some vintages, the wine is as good as the vintage allows.

Chateau La Fleur de Gay can be decanted for an average of 1 – 2 hours, when young. This allows the wine to soften and open its perfume. Older vintages might need very little decanting, just enough to remove the sediment.