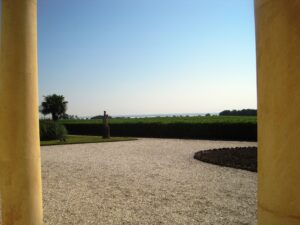 Chateau Montrose is esteemed today for it’s powerful, full bodied Bordeaux wine. But that is not what the property was originally known for. In fact, before Bordeaux wine was produced at the estate, it earned fame for being a simple moorland covered with heather and gorse.

That all changed when Alexandre de Ségur, who also owned other illustrious Bordeaux wine properties such as Chateau Mouton, Chateau Lafite and Chateau Latour, gave the property to his son, Nicolas Alexandre. Alexandre did not keep the property long. In 1778, he sold it to Etienne Théodore Dumoulin.

Etienne’s son, Théodore, was convinced that this deserted heath had hidden value. He cleared the land, planted vines, and built a château, with the necessary outbuildings. In 1815, the vineyard was still modest, but Montrose was already included among the Médoc wine nobility. In 1855, Montrose was classified Second Great Growth: well-deserved recognition for all the owner’s hard work in developing the vineyards… and a resounding success in the small world of Médoc wine!

Théodore Dumoulin was the first to call this Bordeaux wine estate «Montrose». The local people knew it by the name of «Lande d’Escargeon». So why did he call it Montrose? According to local legend, when the heather was in flower, the hillsides turned into a lovely pink colour (‘rose’ in French). Sailors, on the river, that was a busy waterway back in those days, soon started calling the area «Mont Rose»… and Mr. Dumoulin decided to adopt the name.

However, in 1861, five years after Théodore Dumoulin’s death, his adoptive children sold the estate. The new owner, Mathieu Dollfus, was a visionary businessman. He reorganized and modernised the entire estate, modifying the château and erecting houses for the estate workers, as well as new farm buildings. He installed huge bullock pens, stables, and accommodation for the coachmen. He even invested in an automatic system for distributing horse feed and took the unusual step of providing social security for his workers, with whom he also shared the estate’s profits. By 1880, Montrose-Dollfus had truly become a small village, with narrow streets, squares, houses, and workshops. We owe Montrose’s unusual present-day appearance to Mathieu Dollfus. Unfortunately, the ravages of phylloxera

Maintaining quality at any price !

In 1896, Château Montrose became property of the Charmolüe family, after a (brief) period of ownership by Jean Jules Hostein. The new owner, Louis Victor, was born at Château Figeac, in Saint-Emilion: an excellent reference. By marriage, he had also acquired Château Cos d’Estourne, and Château Pomys in Saint-Estèphe, as well as the Troussas and Condissas estates in Bégadan, Château Romefort in Blaignan and Fumadelle Island in the Gironde Estuary! Montrose remained in the Charmolüe family for three generations. Louis Victor’s descendents improved the vineyards and maintained the quality of the wine, in spite of all the upheavals of the Second World War. In May 2006, Jean Louis Charmolüe left the estate with the satisfaction of having done a good job.

The 70-hectare Bordeaux wine vineyard in a single block is extremely unusual in the Médoc. The terroir is also unique because of its composition. Montrose’s soil consists of deep, large-size gravel with sand and a small amount of clay. Such soil is rather rare in the Médoc. Château Montrose overlooks the Gironde Estuary. In fact, the proximity of this vast body of water (called locally «THE RIVER» ) is a major advantage. The estuary is responsible for maintaining a mild microclimate and toning down extremes of temperature. Helped by the presence of nearby marshes, it provides remarkable air conditioning in the summer while also compensating for the rigours of the winter. 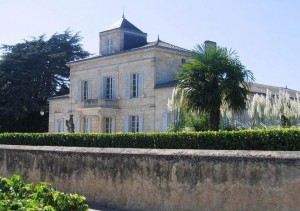 The large gravel found throughout the estate’s topsoil originated in mountains in the Massif Central and the Pyrenees. These pebbles absorb the sun’s heat during the daytime and release it at night. This is an important way of improving the maturity of the grape which help give much of the special character to this Bordeaux wine.

At Château Montrose, the terroir’s potential is optimised on the basis of a very simple winemaking philosophy, summarised by Jean Bernard Delmas as follows: Wine is made in the vines and not in the winery. In other words, fine wine can only be made with good grapes. The finest terroir and best vineyard plots on the estate were identified many years ago. Vineyard work and winemaking methods are guided by a global, common-sense approach to

To promote deep root growth on the vines, 70 % of the vineyards on the estate are ploughed between the rows. The finest vineyard soils enjoy a reliable natural water supply. If the soil is not ploughed, the vine roots remain on the surface, whereas they need to penetrate to deeper layers to access water during dry periods and absorb it by capillarity.

The vines are replacied every 40 or 60 years. This cleans up the soil by removing any diseased roots. When the vineyard soil has rested for three or four years, it is then replanted with young vines. Gradual replanting ensures that almost all the Château Montrose vineyards are replaced over a forty-year-period. Establishing competition among the vines.

To produce great Bordeaux wine, you need high quality fruit, This comes when the vines are forced to suffer and compete with neighbouring vines. For this reason, planting density is relatively high – around 9,000 vines/hectare – and yields are controlled at around 45 hectolitres per hectare. Ensuring that grapes reach optimum ripeness Careful leaf-thinning, combined with systematic bunch-thinning (3 to 4 bunches per branch) throughout the vineyard (starting in 2006), prevent the development of grey rot and help the grapes reach peak ripeness. Every year, some of the grape bunches are eliminated after flowering, to promote concentration of the sugar in the grapes and to ensure a good state of health. Training grape-pickers to harvest selectively for quality.

At Château Montrose, the grapes are initially sorted in the vineyard, by pickers who take great care to put only the best bunches into the basket. This concern for quality is reflected throughout the process, with sorting tables on the trailers in the vineyard, as well as after the grapes leave the destemmer.

A question for Jean Bernard Delmas

How has the situation at Château Montrose changed since May 2006?

“On the viticulture side, work continues as usual. We use methods that have been tested over the years, applying them even more carefully to obtain the best grapes possible.” They started extending the storage cellars, to ensure that wines are kept in barrels, cases, or bottles under optimum conditions for a year. The winery has also been extended.

The vat room, renovated by the previous owner barely 5 years ago, is perfectly functional. They reorganized the buildings to keep the vineyards equipments (tractors, spraying equipment, etc.) away from areas used for wine ageing and storage. The key factor remains unchanged: a determination to produce the best possible wine.

Château Montrose is a powerful Bordeaux wine. It’s big, dense and masculine. At times, the wine can display a barnyard, or horse smell. The 1990, which scored 100 Pts from Robert Parker is known to have that quality. The wines are firm and tannic and often requie decades, before maturing.