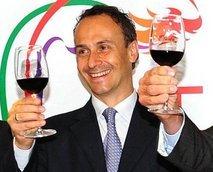 Here’s something you don’t read about every day.  According to the BBC news, the top French diplomat in Hong Kong and Macau was recently suspended and recalled to Paris last week after being accused of stealing two very costly bottles of wine! According to sources, the wine was valued at  50,000 Hong Kong dollars which is about $,6,440 US Dollars. It is not know at this time if the bottles were Bordeaux wine or not.

In the understatement of the week, the foreign ministry was quoted as saying, “Fonbaustier’s unspecified actions would likely not meet the requirements of professional conduct for a French diplomat.”

In an article in Le Monde, the French newspaper, they wrote, “Mr Fonbaustier apparently hid them in his trousers before removing them from the restaurant.”  That must have been an interesting sight! Think of the interesting comments that could be made with that one. For example, is that a wine bottle in your pants, or are you just happy to  see me?

Marc Fonbaustier, 46, the French consul general in the Chinese, semi-autonomous territories, was forced to leave his job once Beijing made the formal request for his removal.  Fonbaustier held the job for just over a year.   Police and the French consulate in Hong Kong both refused to comment.  A consulate spokesperson was quoted as saying, “We stand by the statement of the spokesman for the foreign ministry last week.”

Fonbaustier is currently suspended from duty.