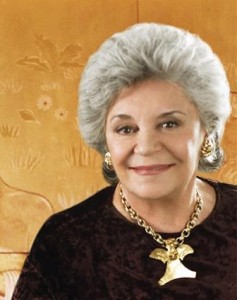 It is with great sadness that we are reporting on the passing of one of the world’s great ladies of wine. The Baroness Philippine de Rothschild, the owner of Chateau Mouton Rothschild reportedly passed away late Friday night, August 22 or early Saturday morning, August 23. Services were held for the Baroness Philippine de Rothschild Monday, September 1, 2014 in Pauillac, Pauillac is where Chateau Mouton Rothschild is located. It is expected that more than 2,000 people will attend the services.

1933 was an important year for the powerful Rothschild family. Baron Philippe Rothschild had already changed the future and fortune of the legendary chateau, Mouton Rothschild by introducing chateau bottling at the estate a decade earlier. The Grand Chai of the famous Pauillac estate was erected and in full use. The Baron Philippe Rothschild added to their holdings with the purchase of a neighboring vineyard, Chateau d’Armailhacq. More importantly, the family announced the birth of their daughter Philippine Mathilde Camille de Rothschild on November 22, 1933 from Paris.

The proud parents, Baron Philippe Rothschild and Elisabeth Pelletier de Chambure, were not married at the time. They eventually married in 1934. The famous couple separated in 1939. Sadly, in 1943, the young Philippine Rothschild witnessed her mother, Elisabeth Pelletier de Chambure being taken by the Gestapo. Her mother died in a concentration camp in 1945. The future Baroness Philippine Rothschild was fortunately saved from that cruel fate.

Before entering the world of wine, Philippine Rothschild graduated from the Paris Conservatoire National d’Art Dramatique in 1958. She tried her hand at acting, appearing in numerous plays, including the production of “Harold and Maude” under the stage name of Philippine Pascal.

Theater was not her destiny. By 1981 she was continuing to increase her involvement with Chateau Mouton Rothschild, which was now a First Growth chateau by creating the first travelling public exhibit of the original art for the famous labels used on all the different vintages of Mouton Rothschild. She remained passionate about the arts her entire life. Philippine de Rothschild was personally involved in the selection of artist chosen each year to design the label for Mouton Rothschild. 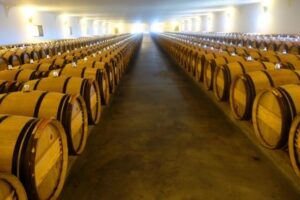 Under the direction of Baroness Philippine Rothschild, she oversaw the dramatic renovation of Chateau Mouton Rothschild, which was completed in 2013. She also managed to completely renovate the Fifth Growth estate, Chateau Clerc Milon, turning the property into one of the most green, environmentally friendly wineries in the Medoc. In 2013 Philippine Rothschild received the “Lifetime Achievement Award” from the Institute of Masters of Wine during the week of Vinexpo in Bordeaux. Those were not her only awards, she also holds the coveted Officier de la Legion d’Honneur as well as an Officier des Arts et des Lettres. The Baroness Philippine Rothschild was also involved in numerous charitable and philanthropic causes.

It was not only Mouton Rothschild that she continued to propel to greater heights. As the chairman and majority shareholder of Philippe de Rothschild SA, she helped improve the quality of all their estates and increased sales worldwide for their numerous brands which included; Chateau Clerc Milon and Chateau d’Armailhac in the Left Bank of Bordeaux. Aside from their three Classified Growths in Bordeaux, the baroness oversaw massive growth with one of the world’s leading branded wines, Mouton Cadet and Champagne Barons de Rothschild. The company Philippe de Rothschild SA also produces wines in the Napa Valley with Opus One, in Limoux with Domaine de Baron’arques and at Almaviva in Chile. When added to all their branded and negociant wines, in total, the company sells more than $350,000,000 worth of a wine each year!

Philippine Rothschild represented the epitome of grace, elegance, charm, drive and frankly, everything that is great about Bordeaux. She was liked by everyone and will be missed as she is one of the regions last remaining links to the past.