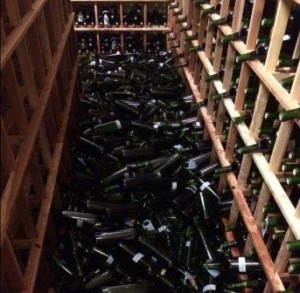 To say 2014 is a challenging vintage for growers in the Napa Valley is a bit of an understatement. Previously the region was plagued by drought and fires. If that wasn’t bad enough, residents of the Napa Valley experienced the biggest earthquake in 25 years!

The epicenter of the earthquake according to the USGS located north of Vallejo. Vallejo is the largest city in Solano County with population of more than 100,000 people. The suburb, American Canyon, situated in the southern end of Napa County also suffered severe damage. There are several warehouses in the American Canyon area with large stocks of wine that are held for retailers, shippers and wineries. Due to the difficultly in getting into and out of the American Canyon area, it is not yet known the full extent of the damage in that region.

Parts of Highway 37 are closed. The Napa Valley Airpot is closed. Numerous residents and businesses throughout the region are without power. Many residents are also without water. Up to 25% of the Napa Valley area could be effected for one week or longer. On the bright side, had the Napa Valley quake struck only a few hours earlier, the amount of personal injuries would have been much higher, as the struck the densely populated city of Napa.

According to the USGS, the source of the earthquake can be placed on the little known, West Napa Fault. The West Napa Fault covers a 35 mile stretch that starts close to Benicia and heads north to St. Helena. Earthquakes are semi common in California. In 2000, a much smaller earthquake struck region, centered close to Yountville. That quake registered 5.1 magnitude on the Richter scale. It is though that the 2000 Napa Valley earthquake caused as much as $50 Million dollars in damages. This new tumbler was much more severe. Damages could exceed $100 Million!

If you are in the Napa Valley or surrounding area, if you can, please feel free to post and let people you are OK and if you have suffered any damage. Having numerous friends in the Napa Valley, I wish everyone the best and hope the only destruction suffered was to bottles and not people.

The Governor of California, Jerry Brown is already working with Napa residents and Office of Emergency Services to help the county. Damage from the quake hit the downtown area of Napa the hardest. Because that area is populated with residents, stores, buildings and other commercial, the damage was quite severe. It is not yet known the extent of the damage suffered at any of the famous wine regions wineries. Napa Valley is the home to some of the world’s best producers of Cabernet Sauvignon wines.

Aftershocks are still being felt in the Napa Valley. If you have not experienced an earthquake or its aftershocks, from personal experience, the initial aftershocks can be almost as scary as the earthquake. Aftershocks range in motion from a quick, violent moving of the earth to swaying motions, which feel similar to an amusement park. Trust me. There is nothing amusing about an earthquake of the magnitude felt by the residents of Napa Valley this morning. The full extent of the damage is not yet known. Injured people crowded in the local Queen of the Valley Hospital due to earthquake related injuries. The first wave of patients arrived at the hospital due to injuries sustained during, or shortly after the quake. Additional people needed medical care came to the hospital due to injuries suffered while trying to cleanup the aftermath of the quake. I hope all my friends in Napa are OK this morning. Being in Los Angeles California, I have experienced earthquakes before. Earthquakes that strong are scary!

Picture after picture of damaged homes and broken bottles are all over Facebook. Twitter is also filed with numerous images of the damage, especially to various cellars with layers of broken wine bottles soaking in rivers of wine. Barrels of wine were tossed like they childrens toys. 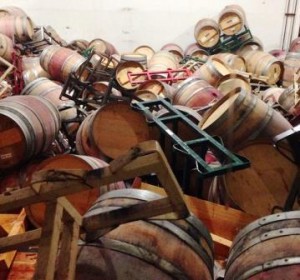 This incredible photograph was taken by Steve and Jill Matthiasson of Matthiassons Wine. They not only produce wine, but Steve is a well-known consultant as well. It’s scary to look at all that destruction. We wish them all the best.

The downtown Napa area with its numerous, older brick buildings suffered the most damage. The streets of the downtown Napa are littered with broken bottles, smashed windows, bricks and debris. Days of cleanup face the residents of Napa Valley.

The photograph of the broken bottles in the cellar was taken by David Duncan, CEO of Silver Oak and posted on his Twitter page showing the extent of the damage suffered.