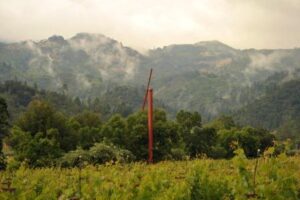 The owners of Chateau Latour, the famed First Growth estate in Bordeaux agreed to purchase Araujo Estate in the news story of the year for Napa!

It was announced this morning that the owners of Chateau Latour, the famed First Growth estate in Bordeaux agreed to purchase Araujo Estate. This is the first purchase by the Pinault family in California. Auaujo was acquired by the holding company of Chateau Latour, the Artemis Group, parent company of Château Latour. This is not the first purchase outside of Pauillac for the owners of Latour, previously they obtained vineyards in Burgundy in the Vosne Romanee appellation with the purchase of Domaine d’Eugenie. Their next purchase was in the Rhone Valley with Chateau Grillet. 2013 will be the first vintage produced by Frederic Engerer and his new team, which is expected to include many of the current employees of Araujo including the wine maker, Françoise Peschon. The purchase of Araujo Estate wines by Chateau Latour is a good fit. Frederic Engerer is well versed in California wine and is known to enjoy several of the more interesting wines from a myriad producers, which is not always the case for some of the Bordelais, as they can remain Bordeaux centric.

Bart and Daphne Araujo bought the 38 acre, Eisele vineyard in 1990. Their first vintage was 1991. Over the years, grapes from the Eisele vineyard have produced numerous great wines. Prior to their use in Araujo Estate, Ridge Vineyards, Joseph Phelps, Conn Creek and Page Mill were some of the well-known estates to make wine from that grape source before Araujo. Since purchasing the estate in 1990, Bart and Daphne Araujo managed to turn the winery into one of the Cult Cabernet Sauvignon wines from California. According to Bart Araujo, much of their success has to do with embracing first, organic farming techniques and later, sustainable and biodynamic farming. When complimented on the elegant style of Araujo wine, Bart Araujo told me he produces wines he wants to drink with dinner, not for dinner. 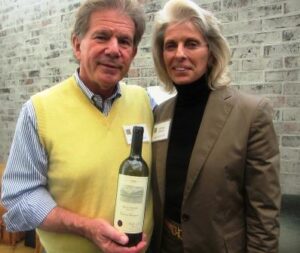 The 38 acre Eisele vineyard is only a part of the Araujo vineyards. In total, they are 137 acres of vines. The price has not been disclosed. However, with some of the better vineyards selling for between $400,000 and 500,000 per acre, you can rest assured this transaction was for a lot of money. On the other side of the coin, François Pinualt, who bought Chateau Latour in 1993 is not foolish with his money. When he makes a purchase, more often than not, it makes sense. Something else you can take to the bank, prices for Araujo are not coming down. Consumers can expect to pay more for the wine in the future. With that in mind, it’s anyone’s guess as to the price. 2 years ago, Sloan vineyards, with only 12 acres of vines was sold for a record breaking price of $40,000,000! While it’s easy to see the total price of the entire package for Araujo Estate wines at well over that price, it’s not likely the cost per acre will be anywhere near to the price set in that previous transaction.

Araujo Estate Wines produces several different bottling’s. Their flagship is of course, the famed Araujo Eisele Vineyard Cabernet Sauvignon, which made its debut in 1991. The estate wine is a blend of Left Bank Bordeaux varietals. While dominated by Cabernet Sauvignon, the remainder of the blend includes Cabernet Franc, a small amount of Petit Verdot and a bit of Merlot. Michel Rolland is the consultant.

They also produce Altagracia, a Cabernet Sauvignon based wine from estate and purchased fruit which was created in 1999. The estate has produced a small amount of estate grown Syrah since 1994 from the Eisele vineyard. Araujo also makes two white wines, a Sauvignon Blanc which made its debut in 1999 and a Viognier, which is released only in select vintages. Araujo Estate has also produced experimental wines from time to time with their older vines.

Aside from wine, the estate also produces olive oil and soap. The deal to purchase Araujo Estate included the vineyards, winery, residence, wine making facilities, back stock, customer list and the name.