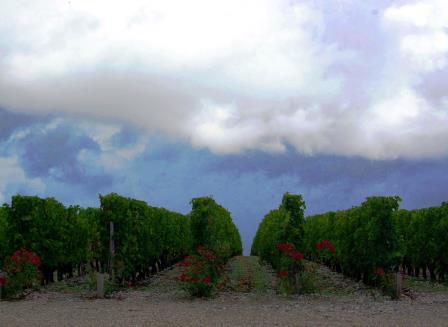 The 2013 Bordeaux vintage was not helped by the second storm in a week to hit the region. Early reports from Bordeaux state the area was struck by a massive hail storm during the night of August 2. Most of the damage was confined to the Entre Deux Mers  appellation. Early reports state as much as 5,000 hectares of vines were decimated. Parts of Cotes de Castillon also suffered damage. The hail storm of 2013 is said to be the equal of the last major hail storm that slammed into the Bordeaux region in May, 2009.

This is the second severe storm to strike Bordeaux in less than a week. Just a few days ago, on July 26, a massive rain storm delivered close to two and a half inches of rain in under an hour. That torrential storm was accompanied by gale force winds of over 100 miles per hour that uprooted trees throughout the Medoc! The winds were fierce. Much of the region experienced power outages throughout the weekend n the vineyards and in city. Damage to the Left Bank could be seen as debris was scattered throughout the area from as far south as Margaux, where the tree in front of Chateau Palmer was uprooted all the way north to Pauillac, where the famous flag poles of Chateau Pontet Canet used to fly. Similar damage was also reported in Chateau Lafite Rothschild. The July storm 26 also delivered a torrent of hail to the estates located in the Right Bank, close to Libourne.

So far, 2013 Bordeaux vintage has proven to be more than challenging for Bordeaux chateaux. However, Bordeaux is not the only, French wine producing region suffering in 2013. Serious difficulties have been experienced by numerous regions all over Europe. Parts of Burgundy has been devastated, especially in the Cote de Beaune appellation. Severe damage has also been widespread in Champagne with up to 3,000 hectares of vines damaged by the areas recent storms and making matters worse, 300 hectares were completely devastated. Cognac is also reporting problems this year as well.

Until these recent storms, Bordeaux was starting to dry out in the vineyards. Following one of the wettest, coldest, starts to a growing in recent memory, things were starting to look up for Bordeaux, which enjoyed close to 3 weeks of uninterrupted, warmth and sunshine with temperatures close to 85 degrees. These recent storms have made the 2013 Bordeaux growing season even more difficult.

Of course, even though it’s not a pretty picture today, the truth is, it is still far too early to prognosticate on what will or will not happen by the time the harvest rolls around. The harvest is going to be late and small. Neither of those conditions at this time is a guarantee of quality or a lack thereof. However, for a myriad of reasons, late vintages are never the source of great years.

At the end of the day. there is only one thing you can count on for all wine makers, growers and vineyard managers in every region when it comes to predicting the quality of the harvest before the grapes are picked. That is simply, anything can and will happen.