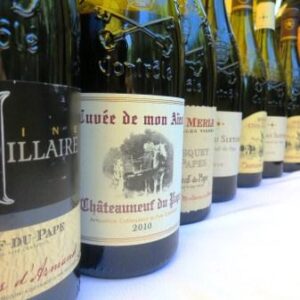 2010 Chateauneuf du Pape looks like a stunning vintage for the Rhone Valley and there is going to be a lot of high quality wine from Chateauneuf du Pape for wine lovers to consider from 2010. Although, sadly, quantities of wine produced are lower than usual in the 2010 vintage.

After tasting across a wide spectrum of wines, it’s obvious 2010 Chateauneuf du Pape offers a lot of ripe, rich, concentrated, lush, powerful, alcoholic, balanced wines that will drink well young, yet age and develop for 10, 15 or in the best cases, 20 years or more! While the wines tasted were from only one importers book, it’s still a good, early look at a wide array of Chateauneuf du Pape wines and wine styles. All of that adds up to an exciting vintage in Chateauneuf du Pape!

2010 Charbonniere – This wine remains one of the best values in Chateauneuf du Pape and one whiff and sip reminded me why. Filled with black pepper, black raspberry, kirsch and jam, this soft, lush, deep wine ends with layers of spicy, black raspberries. 91 Pts

2010 Clos des Brusquieres – Referred to as the poor mans Bonneau, because the wine maker is a nephew of Henri Bonneau, who learned his trade from the elder Bonneau, the wine is packed with layers of sweet, jammy kirsch, pepper and herbs. Rich, with good intensity, this should age well. 90 Pts

2010 Cote de L’Ange Tradition – From a blend of 70% Grenache, 20% Mourvedre and 10% Syrah, the wine opens with smoke, earth, strawberry and black cherry jam.  Round and fleshy, the wine ends with ripe, sweet, black cherries. 90 Pts

2010 Fortia Tradition – Strong barnyard aromas that reminded me more of Mr. Ed’s stable than wine, it took a while to move past the animal scents to find black cherries and earth. The wine has depth, and some people are going to like it a lot more than I did, but the only way this was going to rock my boat, was if I was going to sea in an Ark.  85 Pts

2010 Fortia Cuvee de Baron – From a blend of 50% Syrah, 40% Grenache and 10% Mourvedre, this is one of the heaviest concentrations of Syrah in Chateauneuf du Pape. This concentrated wine offers sauvage aromas, soil, barnyard, plum and earth along with meat or beef blood.  This traditionally styled wine ends with a long finish. 90 Pts 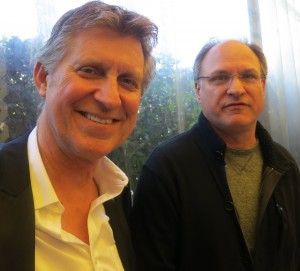 2010 Olivier Hillaire – This relatively new producer, (and a new discovery for me)  began making wine in about 2004.  With fresh black cherries, earth, fresh herbs, leather and kirsch, the wine gets your attention.  Full bodied, rich and lush, the wine finishes with ripe, jammy black raspberries.  92 Pts

2010 Olivier Hillaire Les Petits Pieds d’Armand is stuffed with licorice, jammy blackberries and cherry. From 100% old vine Grenache, and when I say old, I mean vines over 100 years old, this concentrated, pure, kirsch, Provencal herb and peppery is lush and lusty,  95 Pts

2010 Mas de Boislauzon Tradition – This fabulous, rich, concentrated, earthy, black cherry and spice filled wine is a great value for its quality.  The wine is tannic and demands a few years in the cellar to soften, but it’s worth the wait. 92 Pts

2010 Mas de Boislauzon Tintot – From 100% Mourvedre, with vines that average at least 80 years of age, this inky, black wine is stunning!  Licorice, blackberry liqueur, herbs, black cherry and smoke aromas explode from the glass.  Fat, sassy and packed with layers of rich, ripe, dense fruit, this massive wine coats your mouth and palate with flavor and velvet textures.  97 Pts

2010 Pierre Usseglio Mon Aieul – From 100% Grenache, made from insanely low yields of 16 hecoliters per hectare, the wine reached 16.5% alcohol. Yet there is no touch of heat in the concentrated, deep, lush, ripe, licorice, black cherry liqueur and floral wine.  96 Pts

2010 Vatican Tradition – Earthy, forest floor, kirsch, animal and smoked meat aromas get you interested in the wine.  Soft, round and chewy, the wine ends with ripe, black cherries. 92 Pts

2010 Vieux Donjon – Blackberry, licorice, truffle and black raspberry scents emerge with little effort. In the mouth, the wine is lush, round and concentrated. With tannins and structure to age, give it a few years before popping a bottle. 93 Pts