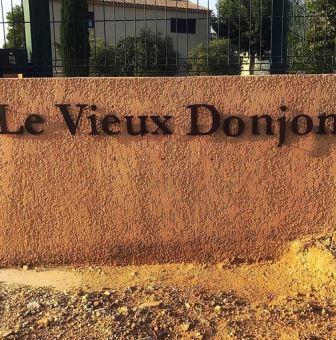 Learn everything about Le Vieux Donjon, Chateauneuf du Pape with wine tasting notes, wine and food pairing tips, best vintages, a history of the property and information on the vineyards and winemaking. If you want to read about other important wineries and wine makers from the Rhone valley: Links to all Rhone Valley Wine Producer Profiles

Le Vieux Donjon is a fairly new winery. Especially if you use European standards. Vieux Donjon was formed in 1966 by Marcel Michel. Prior to that date, their harvest was sold in bulk to negociants. Since 1979, Vieux Donjon has been managed by Lucien Michel and Marie Michel.

Following in the footsteps of their families young tradition, their daughter Claire Michel, (who is now Claire Fabre, as she changed her name when she married Adrien Fabre of Domaine la Florane and Domaines de l’Echevin), manages Vieux Donjon along with her brother François Michel.

Claire Fabre, like many young winemakers all over the world, learn their part of the wine making trade by working as an intern at a different winery. That tradition often takes place with the aspiring intern moving to another country for a period of time.

Claire Fabre worked as an intern at one of the top wineries in Napa California, Harlan Estate to learn more about the wine trade. So, when you meet her, do not be surprised about her love of Cabernet Sauvignon and other wines from California and the Napa Valley!

Since taking over, the brother and sister team has slowly modernized the estate. In 2013 they inaugurated a new tasting room as well as updated the entire winery.

The 18 hectare Southern Rhone vineyard of Vieux Donjon is divided as follows. 17 hectares of vines are devoted to the production of red Chateauneuf du Pape wine grapes. 1 hectare of vines is used for white wine grapes. The best parts of the Vieux Donjon vineyards are planted to old vine Grenache.

Many of those vines are close to 100 years old. In fact, more than 33% of their vines are more than 100 years of age! They have vines placed in different parts of the Chateauneuf du Pape appellation in the Le Pied Long, Bois de Boursan, Le Mourre de Gaud, Champigne and Cabrieres lieux-dits.

They also own vines planted in sandy soils not too far from Chateau Rayas. As you can see from their vineyards, Vieux Donjon is not far from Cabrieres and Mont Redon.

Le Vieux Donjon is an organically farmed, traditional style of Chateauneuf du Pape that ages well and sells for a fair price. Vieux Donjon is mostly traditional in their wine making as they only partially destem the grapes, a practice they began in 1993.

Vieux Donjon is another important estate that does not produce a special high-end wine. With all their old vines, this is something they could easily do, but they chose not to, as they think it will harm the blend for their main wine. Philippe Cambie works as the consultant. 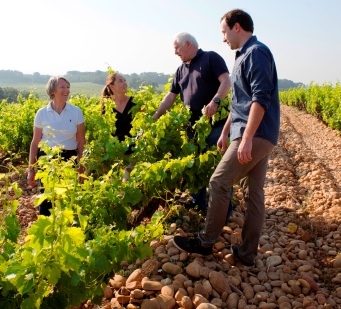 Le Vieux Donjon Rouge is usually a blend of 75% Grenache, 10% Mourvedre, 10% Syrah and 5% Cinsault, along with various other grape varieties added in small amounts. On average, the vines are more than 50 years of age, with many of the vines being older than 100 years.

The grapes are destemmed to various percentages, depending on the vintage. During fermentation at Vieux Donjon, all the grape varieties are vinified together, with the exception of the Mourvedre. The winemaking here is traditional.

Vinification takes place in traditional, square shaped, red concrete vats and aged for 18 months in a combination of 80% foudres and the remaining 20% is aged in cement vats before bottling. The production is close to 4,200 cases per vintage.

Le Vieux Donjon Blanc which made its debut in 1993, is made from 50% Roussanne and 50% Clairette. The wine is completely aged in stainless steel tanks for 6 months. With only 1 hectare of vines, the production is quite small, on average, they produce about 300 cases of wine per vintage.

Le Vieux Donjon can be enjoyed on the young side. However, it is better for young vintages to be decanted for 1-2 hours. This allows the wine to soften and open its perfume. Older vintages might need very little decanting, just enough to remove the sediment.

Le Vieux Donjon is usually better with 4-5 years of bottle age. Of course that can vary slightly, depending on the vintage. In the best vintages the wine should be consumed within 5-20 years after the vintage.

The white wine of Vieux Donjon is best served with a myriad of different seafood dishes, shellfish, crab, lobster, sushi, sashimi, chicken, pork and veal, as well as Asian cuisine.

Le Vieux Donjon also produces wine from vines they own outside of Chateauneuf du Pape in the Minervois and Languedoc Roussillon appellations.