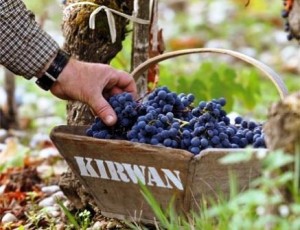 Chateau Kirwan located in the  Margaux appellation has been on a slow and steady course of improvement since the early 1990’s. In 1991, the estate brought in Michel Rolland as their consultant. Kirwan is managed by Sophie Schyler who is ably assisted by their winemaker Philippe Delfaut. This is a Bordeaux property that strives to produce the best wine possible. Over the past several years, they restored the chateau and built a new barrel cellar. With the 2011 Kirwan aging in barrel at the moment, Philippe Delfaut candidly discussed the 2011 Bordeaux vintage and harvest.

Jeff Leve How would you describe the 2011 Kirwan Bordeaux growing season at Chateau Kirwan?

Jeff Leve: What took place for you during the 2011 Bordeaux growing season at Chateau Kirwan to make it so surprising?

Philippe Delfaut “The first part of the season was very promising, with hot dry weather. Then the excessive heat and drought caused withering and scorching of the grapes, leading to reduced yield. Certain varieties such as the Petit Verdot suffered acutely from the drought. The Cabernet Sauvignon withered to a greater extent than the others”.

Jeff Leve: What happened next?

Philippe Delfaut “The rain finally came on July 14.  But it was too late. The Cabernet Sauvignon continued to dry out. Nonetheless, the rain revived the physiology of the vine at a critical point in the ripening process and the grapes continued to mature”.

Jeff Leve: With a difficult and surprising growing season, were you helped by the blast of heat that arrived in late September?

Philippe Delfaut “Yes! The return of hot and dry weather during the harvest season saved the 2011 Kirwan vintage”.

Jeff Leve: Did this help with all your grapes?

Philippe Delfaut “It was more beneficial to the Cabernets than to our Merlot. At the time of the harvest, the grapes required very meticulous sorting to eliminate dried berries. Our teams of sorters easily preformed this process by hand. At one point there was a threat of botrytis, but in the end this was not a problem. The hot dry weather from September onward naturally halted the disease “.

Jeff Leve: When did you start your harvest?

Philippe Delfaut “We began with the Merlot, September 12. That took 4 days to finish.  We worked on the Cabernet Franc and Petit Verdot from September 20 to September 24. We finished with our Cabernet Sauvignon. We started with that variety September 26 and finished September 29 in the midst of an extraordinary Indian summer!”

Jeff Leve: Was this earlier than usual for you?

Philippe Delfaut “The 2011 Bordeaux harvest was two weeks earlier than 2010. But this was far from being our earliest harvest”.

Jeff Leve: How did this affect your harvest?

Philippe Delfaut “Generally, an early harvest allows more time for phenolic compounds to reach maturity. It is usually easier to ripen the tannins in September than in October”.

Jeff Leve: What about alcohol levels?

Philippe Delfaut “2011 will stand out for higher alcohol content for the Cabernet (14%) compared to the Merlot (13%). This has never happened before!”

Jeff Leve: Many producers in Margaux reported very low yields.  What wer yours like in the 2011 Bordeaux vintage?

Philippe Delfaut “We were very happy to reach a yield of 2.2 tons/acre (41 hl/ha), since overall the Margaux appellation produced very little”.

Jeff Leve: What choices will you use during the vinification?

Philippe Delfaut “Vinification is simple as the phenolic compounds are very ripe and easy to extract. We adopted a very gentle vinification technique with brief pumping over and a temperature between 77 and 79°F (25-26°C). Maceration lasted between 20 and 25 days. Alcoholic and malolactic fermentation began simultaneously and ended upon the devatting of the wine”.

Philippe Delfaut “Simultaneous alcoholic and malolactic fermentation is very beneficial. It avoids the risk of aromatic deviations that can arise due to overly long malolactic fermentation. The wine remains more distinct and precise with the fruit entirely preserved.  The wines were barreled directly upon devatting and the maturing process began as of October”.

Jeff Leve:  Now that you’re able to step back and look at the 2011 Bordeaux vintage that is at this point aging in barrel, what are your thoughts?

Philippe Delfaut “2011 is an extraordinary year. We are witnessing a heretofore unimaginable development. The alcohol content in the Cabernet Sauvignon is vastly higher than that of the Merlot!”

Jeff Leve: Are you saying 2011 is going to be a Cabernet Sauvignon vintage?

Philippe Delfaut “There is no doubt: 2011 is a great year for Cabernet Sauvignon on the left bank. Although the Merlot and the Petit Verdot offer brilliant fruit, one must admit that the taste is somewhat lacking in depth. However, the Cabernet Franc and Cabernet Sauvignon reveal an incredible richness that has never before been achieved at Kirwan. The 2011 Bordeaux vintage is one of contrasts. It’s probably one of a kind!”