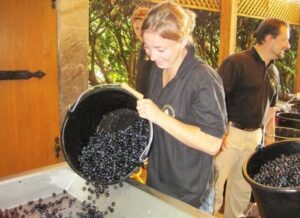 Hubert de Bouard has been at Chateau Angelus in St. Emilion for 30 years.  You’d think by this time, he would have seen it all. But that’s not the case.  The 2011 Bordeaux growing season according to de Bouard is unprecedented with its unusual weather patterns.  With two estates in St, Emilion, Angelus and Bellevue, plus properties in Lalande Pomerol, La Fleur de Bouard,  along with a busy consulting practice, Hubert had his hands full this year.

Jeff Leve:  When did you start harvesting your grapes in 2011  Angelus?

Hubert de Bouard “We started with the Merlot September 20 and did not finish until Octrober 6 with our Cabernet Franc”.

Jeff Leve: You were able to hold off on your harvest longer than originally anticipated. What effect does an early harvest have on the style of your 2011 Angelus wines?

Hubert de Bouard “It depends of the terroir.  For our terroir at Chateau Angelus, if we harvest too early, that gives us a lack of ripeness and concentration”.

Jeff Leve: Were you able to take advantage of the warm weather Bordeaux experienced at the end of the harvest for the 2011 Angelus?

Hubert de Bouard “The nice weather and the good health of the vines allowed us to wait before picking the cabernet franc, until the optimal phenolic ripeness”.

Jeff Leve: Many Bordeaux winemakers have stated the 2011 Bordeaux vintage is the product of an unusual growing season? What took place for you at your St. Emilion and Lalande Pomerol properties?

Hubert de Bouard “With 2011 Angelus, we experienced summer before the spring. The weather conditions this year were quite unprecedented. Spring was particularly sunny and hot, encouraging the vines to develop very early. The weather during summer was relatively uncertain. This meant we had to work on the vines constantly”.

Jeff Leve: What were some of the extra efforts needed in 2011, especially with the draught?

Hubert de Bouard “We had to control the amount of grass growing between the rows of vines. The ploughing of our soils enabled us to prevent the vines from suffering due to a lack of water.

Jeff Leve: Did you need to conduct more deleafing and green harvesting than usual during the 2011 growing season?

Hubert de Bouard “Yes. Thanks to extremely precise, early leaf-thinning and green harvesting, the vines were perfectly healthy.  So to plan and decide when we wanted to pick the grapes, all we needed to check for was the stage of ripeness. We tasted the berries. They had thick, crunchy skins and ripe pips with a hazelnut flavour”.

Jeff Leve: What type of vintage is 2011 Angelus?

Hubert de Bouard “2011 Angelus is a winemakers vintage. More than ever, this year will reflect each winegrower’s keen perception and responsiveness”.