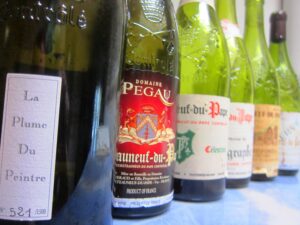 I am often a day late. I’ve been a dollar short at times as well.  Sometimes both occur on the same day. But when International Grenache Day hits, I love celebrating all things Grenache. Especially when it’s wine from Chateauneuf du Pape!

Grenache grows all over the world. While some people will not agree, for my palate, Chateauneuf du Pape is the true, spiritual home of Grenache. The poor, sand and gravel soil, high temperatures and mistral winds bring a special quality to the wines, that are unequaled anyplace else in the world.

Chateauneuf du Pape remains one of my favorite wine regions for many reasons.  Most Chateauneuf du Pape can be enjoyed young, mid-term or with some age.  The wines are produced in a myriad of wine styles from rustic to sensuous and they offer great character. Plus, they are food friendly and for world class red wines with character, many remain fairly priced.

With all that in mind, I’m always open to drinking Chateauneuf du Pape. Being International Grenache Day only made it better. Celebrating the night at home was Josette Meeks, Eric LeVine, Gregg Tenser, Steve Matthesen and the well-known wine writer and critic, James Suckling. 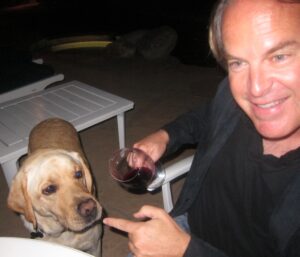 James Suckling and Herky agree, they are 100 Pts on that wine!

James Suckling and Herky sharing wine tasting tips and bonding over Chateauneuf du Pape! They were both 100 Pts on that wine!

2003 Pegau da Capo has turned out so much different than I anticipated.  Having tasted the wine in barrel and in bottle, I was expecting a massive, dark, jammy wine with more power than refinement. Nothing could be further from the truth.  Served blind, this could have passed for a great vintage of Chateau Rayas! The beautiful fragrance was filled with earth, black cherries, kirsch, wild strawberries, pepper and spice. Elegant in texture, with a beautiful array of sweet, ripe, pure, juicy, red fruits in the finish, this suave Southern Rhone wine is a pleasure to drink now and it should remain at this level, or improve for many years to come.  Bravo to Robert Parker for understanding how this wine would develop.  98 Pts

2003 Mordoree La Plume du la Pientre. Boom!  That’s what happened when the cork popped and the perfume blew out of the bottle.  Jammy blackberries, truffle, licorice, spice, pepper, molten cherry and blueberry liqueuer caught your attention and kept it there.  The mind-blowing levels of perfume was intoxicating to smell.  Massive, with insane levels of concentration, this wine coated your palate with flavors and textures for over 60 seconds. But don’t let the size fool you.  Everything was in perfect balance.  Only 1,500 bottles of this wine was  produced for the world!  This was bottle #521. 100 Pts

2000 Vieille Julienne Reserve might not have been a fully correct bottle. The pepper, dark cherry and garrigue, kirsch and eary aromas were present, but the palate was shorter than I remembered.  The wine was good, but it was not the stunning example of 2000 Chateauneuf du Pape from this producer I have tasted before. 93 Pts

1978 Vieux Telegraph – Filled with fresh cracked pepper, gariggue, kirsch, herbes, fennel and black raspberries with a melange of spice, this rich, full bodied, charmingly, rustic, spice filled wine ends with a long, fresh, powerful, pure, cherry liqueur finish. This fully mature Chateauneuf du Pape remains a sublime tasting experience for lovers of old Chateauneuf du Pape.  Believe it or not, this has at least another decade of life to look forward to.  This is best vintage of Vieux Telegraph I’ve ever tasted.  It’s almost impossible to fathom how young this wine was showing after more than 3 decades of aging.  96 Pts

1970 Forita was old, tired and running out of steam.   Perhaps other bottles are better. Being my last bottle, I was happy to have shared it with my friends.  I’ve had better bottles. But if this bottle was correct, it’s not a wine I would buy in today’s marketplace.  85 Pts

1981 Bonneau Celestins is a wine I have been wanting to taste for years.  In fact, this exact bottle was held in my friends cellar for years for me.   Sadly, it was corked.  That hurt.

To get over the pain of the corked and dying bottles, we started opening an amazing selection of Cote Roties, finishing with Sauternes and Cuban Cigars that have been slowly aging for 20 years. With Jimi Hendrix, The Beatles and other killer classic tracks blasting in the background, we managed to hangout until close to 3 in the morning.  Nights like this, made from good wines with great friends make memories that linger long after the wines are finished.