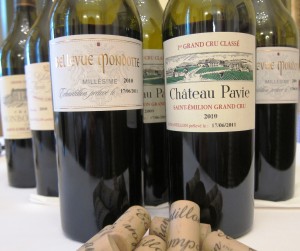 If you’re seeking the wine to open to spark conversation or friendly argument, try Chateau Pavie. You might not even have to open a bottle. Just bring up the wines being produced by Gerard Perse in St. Emilion  to a traditionalist taster and watch them turn as red as the wine in your glass.

There are numerous reasons for this starting with, some wine lovers think Perse has ruined Pavie. They are not fans of fruit, let alone ripe fruit. To them, modern Bordeaux is well… modern and  that’s as bad as it gets. Those same tasters are in many cases, to put it charitably not fans of Robert Parker either.  What they think Perse did to Pavie, Parker did to Bordeaux. If you read my notes and comments on Pavie, as well as all the Perse wines, it’s easy to see I do not agree.

Prior to Perse, the wines made at Pavie were boring. They lacked character as well as fruit. They were correctly made and without fault. But they lacked excitement and personality. Perse gets credit for Pavie starting with the difficult 1997 Bordeaux vintage. He got it right with 2000 Pavie and has not looked back since.

Interestingly, 2010 Chateau Pavie is not as ripe, rich, or alcoholic as 2009. In my view, 2010 Pavie does not share the same level of power or concentration found in 2005, 2003 or 2000. It tastes and feels like it was purposely dialed back. Yet, reactionary tasters railed against the St. Emilion wine.

Wine, like life is a matter of personal taste.  Chateau Pavie is an extraordinary wine filled with minerality, ripe fruit, character, purity, opulence and complexity with the ability to age and improve in the bottle.  Open any of the Perse Pavie wines with a decade or more of age and see for yourself. They are still young, vibrant and fresh, yet they’ve gained in complexity with time. Those are some of qualities that are the hall marks of a great wine. 2000  Pavie was considered an extreme wine by some tasters when it was first tasted.  Open that wine today and add it to a blind tasting.  I doubt many people in a blind tasting will see that wine as extreme today.

Gerard Perse has a spare no expense attitude when it comes to producing the best wines possible. Who else would build a state of the art, wine making facility after purchasing the property and in a close to a decade, tear it down and reconstruct another facility because he thought it would help produce better wine?

Chateau Pavie is not for everyone. What wine is? Ironically, when tasted blind, Chateau Pavie is often amongst the highest rated wines by the same people who previously made derogatory comments on the wine. Pavie, like every wine deserves to be tasted and judged on its own merits for what’s in the bottle. 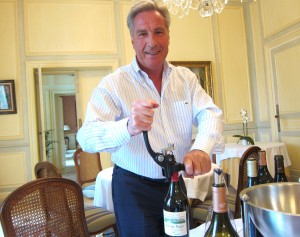 2010 Chateau Pavie – From a blend of 70% Merlot, 20% Cabernet Franc and 10% Cabernet Sauvignon, the wine is deep in color. With aromas of fresh plums, licorice, crushed stone, flowers, pepper and earthy scents, this is a Pavie with a refined character. In fact the level of alcohol is low for recent vintages of St. Emilion and Pavie. In 2010, it reached 14.2%, which is lower than every recent vintage of Pavie. 2010 is not produced in a big, ripe style. With structure and refinement, this is a balanced Right Bank wine with complexity. It is not as upfront and showy as 2009, 2005, 2003, or 2000 and that will make some people happy and will not please others. Like they say, you can’t make everyone happy all the time. 95-97 Pts

2009 Chateau Pavie Decesse –  Inky in color with deep purple accents and a powerful nose filled with licorice, flowers, minerality, jammy blackberry, blueberry and spicy, coffee. In the mouth, this thick, intense, rich wine coats your palate with a bath of ripe, jammy berries and hints of fresh blueberry. This is a very sexy St. Emilion wine. 94 Pts