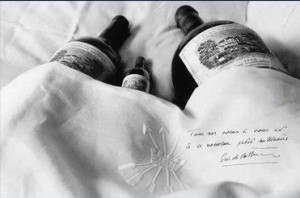 The 1855 Bordeaux wine classification remains in place after more than 155 years! Interestingly, many of the rankings awarded to various chateaux are still valid today. The rankings were arrived at in larger part by the wines selling price. After 155 years, only one change has taken place, Chateau Mouton was promoted from Second Growth to First Growth.

The topic of a reclassification is often discussed. But most people agree, for numerous reason this will never take place. The Liv-ex exchange put together a ranking two years ago that according to Liv-ex, is already out of date. Their reclassification pitted the original Bordeaux wine estates against each other while using the original 1855 criteria, the actual seling price.

The results of their analysis caused a stir and can be viewed in full here. Two years later, the market has changed and because current selling prices has changed again, they updated their classification to reflect current trading values.

To qualify for the Liv-ex Bordeaux Classification, wines had to be from the Left Bank (including Pessac-Leognan) and be produced in quantities of more than 2,000 cases. Only the first wine of each estate was considered. We then calculated the average case price for every qualifying wine (lowest available wholesale price for an in-bond owc 12x75cl case in good condition, excluding duty and sales tax) for the past five vintages, 2005-2009. Prices are as of 30 April 2011.

These price bands were modified from those used in 2009 by calculating the average price difference between the 2009 and 2011 studies for each level of the classification and then applying this modifier to the previous price bands. This change ranged from 11% for the Fifths, to more than 60% for the Firsts.

It remains a matter of academic debate whether the wines were listed in their respective classes in order of price/quality – though the evidence seems to point to this being so. We have assumed they were for the purposes of this analysis. Lafite retakes its position as the top wine of the Left Bank this year – a position it surrendered to Latour in 2009. And in a repeat of the Liv-ex ’09 Classification, Mission Haut Brion joins the ranks of the First Growths, although it has started to fall behind. Lower down the list, Duhart Milon, Beychevelle and Pontet Canet graduate to Second-Growth status. Leoville Barton drops down to become a Third Growth. If we include the second wines, which didn’t exist in 1855, 13 would qualify for this year’s classification. Most notable is the fact that Carruades would be counted amongst the First Growths. Meanwhile, Forts de Latour would be the top Second Growth, with Pavillon Rouge, Petit Mouton and Clarence Haut Brion also positioned within the ranks of the Seconds.

Comparing the most recent classification to that of 2009, the table below shows the biggest climbers. Many of the major movers are brands that are popular in Asia.