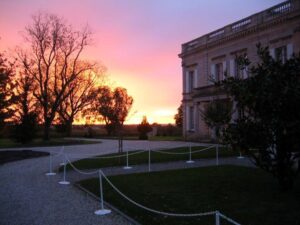 The credit for the birth of the Bordeaux wine estate, Chateau Gruaud Larose goes to the knight Joseph Stanislas Gruaud. However, history gives more credit to two other Gruauds who were direct descendents of Joseph Stanislas.

One was listed as a magistrate and the other a priest. Together they owned numerous parcels of vines which they brought together to form a massive 116 hectare estate. The property was called Fond-Bedeau. Fond-Bedeau bottled their wine as two separate cuvées, Chevalier de Gruaud, which belonged to the priest and Abbé Gruaud which was owned by the magistrate.

The Chevalier de Gruaud erected a watch-tower over the vineyards allowing him to keep track of his vineyard laborers. He came up with the novel idea to fly a German, British or other flag over the property when each harvest was concluded letting buyers know if the wine was in a style that was best suited for them.

He was a clever business person. He sold his wine in the center of Bordaux to the highest bidders at auctions. When his wine went unsold, he raised the price until someone bought up, before it became even more expensive!

In 1778, the Chevalier de Gruaud passed away. At that time the chateau was passed to his son-in-law, Joseph-Sébastian de La Rose. La Rose enlarged the estate with additional purchases. He also added his name to the chateau, which became known as Chateau Gruaud-Larose. He also gave his name to another large Bordeaux wine estate, Chateau Larose-Trintaudon.

Gruaud-Larose was popular with the nobility. In fact, La Rose claimed his wine was “Le Roi des Vins, le Vin des Rois.” That statement still appears on the label today. La Rose passed away in 1795. In 1812 when the property was sold at auction to pay for the family’s legal obligations. Pierre Balguerie, Baron Jean Auguste Sarget and David Verdonnet formed a joint venture and purchased the property together. Verdonnet passed away shortly after. His share was divided by the two remaining partners. For almost half a century, the property was co-managed by both families. 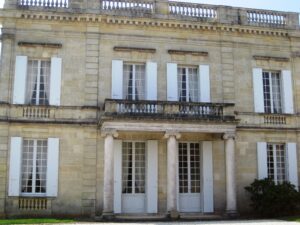 By the time of the official 1855 Classification, when the estate was ranked as a second growth, the property was once again divided. This time it was between three owners. This was a difficult situation and in 1867, Chateau Gruaud Larose was once again split in half. One half remained with Baron Sarget. This was called Chateau Gruaud-Larose-Sarget. The other half remained with the Bethmann descendants and was known as Chateau Gruaud-Larose-Faure. The property managed by Baron Sarget had more success than the Faure family did with their portion. It was Baron Sarget who built the chateau that still stands today. 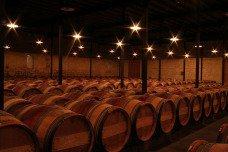 By the time the 20th century rolled around, both properties remained seperate. This all changed with the purchase by the Cordier group. The Sarget portion was sold by its owner Adrienne Lavielle, Baronne Sarget de Lafontaine, in 1917. Two decades later in 1935, the Faure portion was also sold. At this time Gruaud-Larose was finally reunited. The estate was part of the Cordier portfolio, along with other top properties such as chateau Lafaurie Peyraguey in Sauternes. Chateau Talbot was part of their holdings as well.

In 1983, Gruaud Larose was again sold, and was subsequently passed from pillar to post in a number of rapidly successive transactions. It was first purchased by Compagnie de Suez, a French bank, before being sold on to the French multinational firm Alcatel-Alsthom just a decade later. Within just four years, in 1997, Chateau Gruaud-Larose was purchased by another important Bordeaux family headed up by Jacques Merlaut, who has put together a portfolio of properties under the Taillan Group. Merlaut is a relative newcomer to Bordeaux, having worked in the region as a négociant in the 1960s. In 1976, he began to purchase properties in the Medoc and other appellations. The Group, which includes his granddaughter Claire Villars, now also owns Chateau La Gurgue, Chateau Haut Bages Liberal, Chateau Citran, Chateau Ferriere and Chateau Chasse Spleen among others. 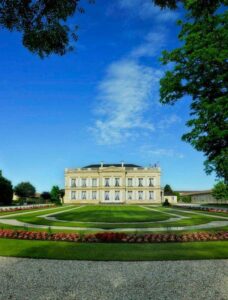 The holdings of Gruaud-Larose amounts to 150 hectares in the St. Julien appellation. 82 hectares are planted to vines. The bulk of the estate lies around Baron Sarget’s chateau, separated from the Gironde by the small village of Beychevelle and sandwiched between the vineyards of Branaire-Ducru and Lagrange.

The terroir is typical for the region with deep Quaternary gravel. The vineyard is planted to 61% Cabernet Sauvignon, 29% Merlot, 5% Cabernet Franc and 5% Petit Verdot. The vines average 46 years of age and are planted at a density of 10,000 vines/ha. The fruit, harvested by hand, is managed by a winemaking team overseen by Jacques Merlaut’s son, Jean. Technical director at the property since 1970, however, is Georges Pauli; he has stayed on through difficult times at Gruaud-Larose, as it passed through the hands of different owners, but he has benefited from continued investment particularly by Alcatel-Alsthom who funded the construction of two new cellars with wooden fermentation vats and a new grape reception room to improve handling and quality of the fruit at harvest time. Nevertheless Pauli must take much of the credit for the maintenance of quality at Gruaud-Larose despite the rapid sequence of new owners and the uncertainty these changes bring. Philippe Carmagnac has remained the cellar master since 1986. Another reason for improvement at the property came about in 2007, when they hired the well-known Eric Boissenot as the oenologist.

Once the fruit is harvested, the grapes are sorted before they undergo a cold-soak prior to temperature controlled fermentation in a mixture of 40% wood and 60% concrete thermo-regulated vats. Pumping over of the fermenting must happens twice a day. Then up to a third of the vintage undergoes malolactic in oak barrels, before ageing the entire wine in Alliers and Nevers oak (up to 50% new) for eighteen months. There is a light fining and filtration before bottling. The grand vin, Chateau Gruaud-Larose, of which there are about,18.000 cases produced per annum, and the second wine, introduced in 1986, is Sarget de Gruaud-Larose, of which about 25,000 cases are produced. The exact proportions varies with the quality of the vintage. However, the reduction in the amount of the Grand Vin and the increase in the second have led to a better quality wine. This is clearly seen with the 2009 vintage.

Chateau Gruaud Larose has the ability to produce stunning Bordeaux wine! The 1961, 1982 and 1986 remain remarkable Bordeaux wines that are close to First Growth in quality. 1990 is not that far away in quality. However, after 1990, with the exception of the outstanding 2000, they have not produced wines worthy of their classification. That seems to have changed with the 2009. Gruaud Larose is a powerful Bordeaux wine, produced in a traditional style that in the best vintages has the specal quality that allows it age, evolve and improve for decades.