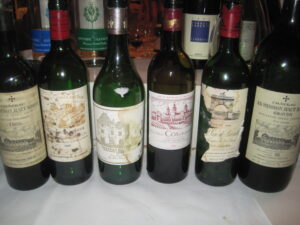 I’m not superstitious. I pet black cats, walk under ladders, step on cracks in the sidewalk and I never worry about breaking mirrors. If I’m the thirteenth guest at a dinner party, what’s for dinner?  But that’s for bad luck.  When it comes to certain signs being a harbinger of good fortune, count me in.  For example; it’s good sign when you’re about to embark on a tasting trip to Bordeaux and one of the bottles being opened at your first dinner in Europe happens to be one of the best wines from the second half of 20th century, 1990 Beausejour-Duffau.  82 Haut Brion, 82 Cos D’Estournel, 66 La Mission Haut Brion and 64 La Mission Haut Brion in magnum, along with great company made the night perfect.  Tom Mann of LHK wines, Stephen Browett from Farr Vintners, Dan Bailey, David Wainwright and the walking Bordeaux Encyclopedia, Barry Phillips.

Barry is an interesting person. Along with Robert Parker and Michael Broadbent, Barry has tasted more old Bordeaux from great vintages than anyone I know.  Dining with him is a rare pleasure. He’s one of the few people I know who remembers tasting 1947 Cheval Blanc in its relative youth.  1947 Cheval Blanc has become one of the true legends of the 20th century. In part, for its unique style and character formed from a very hot vintage. The wine is described as resembling dry Port.  1990 Beausejour Duffau, while not in the class of the ’47 Cheval, is also considered Port like, due to its stunning levels of viscous, ripe fruit.

Being in the middle of the 2009 Bordeaux futures campaign, 2009 Cos D’Estournel came up. I’ve tasted the wine and found to be a wine of remarkable quality. (Go to the profile of Cos D’Estournel to see my notes.) It is one of the more exciting barrel samples I’ve had the privilege to taste. We all have different tastes and opinions. One of my friends at the table did not like the style of the wine. He found it too rich, saying for him, “it was over the top”.

Barry Phillips chimed in remarking, “1990 Beausejour Duffau tasted like vintage Port when it was a barrel sample too”.   I remember a previous conversation I had with Barry about 47 Cheval. He said “The wine was undrinkable in its youth. It was too much like Port”.  Will 2009 Cos D’Estournel evolve along the same lines as other historic, ripe wines? I think it has a chance of developing even better. The wine has remarkable purity and with the finest wine making facilities in Bordeaux, if not in the world at the moment, why shouldn’t it become a better wine?
After 3 hours sleep, I’m on British Airways to Bordeaux.  On the schedule for today, lunch at Margaux with Paul Pontallier, tasting’s at Giscours and Du Tertre with Alexander Van Beek plus dinner at Mouton Rothschild with Philippe Dhalluin & Jean-Emanuel Danjoy of Clerc Milon.