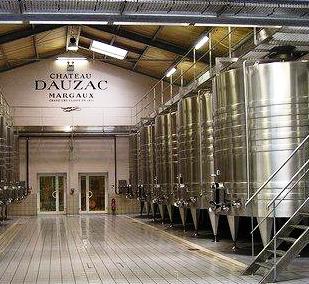 Learn everything about Chateau Dauzac Margaux Fifth Growth with wine tasting notes and wine with food pairing tips. Learn the best vintages, a history of the property, information on vineyards and winemaking. If you want to read about other important, Bordeaux Chateaux: Links to all Bordeaux Wine Producer Profiles

The long history of this semi-obscure, classified chateau dates all the way back to 1622 when the farm of Dauzac was owned by Jean Cousseau. His heirs sold the estate in 1671 to an order of Carmelite nuns.

Fifteen years later, a new owner, Pierre Drouillard purchased the estate. It was the Drouillard family, who after forming a partnership with the well-known Lynch family turned the former farm into a vineyard.

The Drouillard and Lynch families were already active in the Bordeaux wine trade as negociants. Together, they founded Chateau Dauzac. Pierre Drouillard died in 1708. In 1783, Chateau Dauzac was passed on to Jean-Baptiste Lynch.

If the Lynch family name sounds familiar, that’s because they were the founders of Chateau Lynch Bages in Pauillac. In 1863, Chateau Dauzac was sold to Nathaniel Johnston III, the owner of a negociant still in business today.

By the end of the 19th century, Dauzac had become a laboratory for wine growing experiments and research that was headed by Ernest David.

In 1914, with the death of Nathaniel Johnston IV, the Johnston family suffered heavy losses. In the 1930s, unable to overcome the economic hardships brought on by the great depression, they were forced to sell Chateau Dauzac. In 1939, Dauzac was sold at auction.

The new owner, a total newcomer to the wine world, Jean-Jacques Bernat was a well-known Bordeaux ice-cream manufacturer.

Jean-Jacques Bernat brought new ideas to Bordeaux winemaking from his expertise in the production of ice cream. Notably temperature control of the vats using blocks of ice.

The winemaking was carried out under the supervision of Professor Emile Peynaud. In 1988, an insurance company, MAIF, acquired the estate from the Chatellier family. In 2002, the wine-making facilities of Chateau Dauzac were modernized and a gravity-based system was installed.

Unfortunately, on acquiring Dauzac, the MAIF company did not also acquire the staff who knew how to make the wine and properly manage the estate. They quickly turned to Andre Lurton who agreed to take over and manage the Chateau Dauzac. In turn, Lurton also purchased 42% of the property.

After twelve years, Andre Lurton stepped down in favor of his daughter, Christine Lurton de Caix, who took over running Chateau Dauzac. This branch of the Lurton family owns several other Bordeaux chateaux including Chateau Couhins Lurton and Chateau La Louviere in the Pessac Leognan appellation.

That arrangement remained in place until 2014 when MAIF decided to take over managing Chateau Dauzac and purchased all the shares owned by the Lurton family. Today, Chateau Dauzac was owned by MAIF and Credit Agricole Grands Crus until 2018.

In late December, Chateau Dauzc was sold to Christian Roulleau, the founder of SAMSIC, for 130 Million Euros. Samsic is a massive business services company, created in 1986. This was their first investment in wine.

Here’s a fun fact for you. For the 2016 harvest, Chateau Dauzac invited anyone that was friends with the chateau on their Facebook page to join the harvest! Yes, Chateau Dauzac has certainly embraced the modern era.

The 42-hectare Chateau Dauzac vineyard is planted to 69% Cabernet Sauvignon, 29% Merlot, and 2% Petit Verdot. This is a change in the vineyard. Previously up to 5% of Cabernet Franc was found in the plantings. But those vines have since been removed.

The vineyard is planted in one large, single block, which is quite rare, especially for the Margaux appellation. While Chateau Dauzac has 42 hectares under vine, they also own an additional 120 hectares of farmland, greenery, and forest land at their estate. The estate also owns 4 hectares of vines in the Haut Medoc appellation.

The age of vines is between 35-40 years of age. However, they also have old vines, some of which are close to 80 years of age. But their old vines are not planted on their best parcels. Or with the correct rootstock, so slowly but surely, those vines will all eventually be replanted. The vineyard is planted to a vine density of 10,000 vines per hectare.

Experiments are taking place on a tiny, .6-hectare parcel of Cabernet Sauvignon that is planted on its own, ungrafted rootstock. These vines are farmed using 100% biodynamic techniques. 2021 marks the first vintage when those vines will be used to produce a wine from 100% Cabernet Sauvignon. That is quite a rarity as very few Bordeaux producers make 100% Cabernet, let alone from ungrafted vines.

Other experiments are taking place at Chateau Dauzac including a search for alternatives to copper treatments created from algae coming from the local bay of Arcachon created by ImmunRise.

The proximity to the water and its southern position on the appellation, and gives Dauzac a slightly warmer microclimate, so they often are one of the first 1855 Classified Growths to harvest in the appellation.

Their best terroir is on the peak of the gravel slopes known as the plateau de Laborde. This 25-hectare section of vines are the source of their Grand Vin

Not all of the estate is planted with vines. Chateau Dauzac is a beautiful estate to visit, for its parkland, lakes, and greenery surrounding the chateau.

To make the wine of Chateau Dauzac, the wine is vinified in temperature-controlled, stainless steel vats. Malolactic fermentation takes place in tank. The wine is aged in 50% new, French oak barrels for an average of 12 months. It is interesting to note that similar to what takes place at Chateau Palmer, very little sulfur is added at every step from harvest to bottling.

The wines are fined without egg whites as the estate uses plant-based fining agents instead, making Chateau Dauzac a vegan wine since 2016

There is a second wine, actually, they now have two second wines. La Bastide Dauzac, which comes from vines planted in clay and gravel. Starting with the 2013 vintage Chateau Dauzac added another second wine, Aurore de Dauzac, which is produced from vines located in the eastern portion of the estates’ vineyard where you find more sandy soils. In addition, Chateau Dauzac introduced a new wine, Cuvee Franc de Pied which is the first wine produced from ungrafted vines by an 1855 Classified Growth since phylloxera! The wine is produced from 100% Cabernet Sauvignon planted in 2015. Not much is made as only 1,000 bottles are produced each vintage.

On average, the annual production of Chateau Dauzac is close to 16,500 cases of wine per vintage.

In addition, they also produce about 1,250 cases of Le Haut-Medoc de Dauzac from vines located in the Haut Medoc appellation.

Dauzac also owns a small, 5-hectare parcel of vines located just outside the Margaux region in the Haut Medoc appellation. The wine is sold under the name of Chateau Labarde.

Chateau Dauzac can be enjoyed on the young side with decanting. Young vintages can be decanted for an average of 1-2 hours, give or take. This allows the wine to soften and open its perfume. Older vintages might need very little decanting, just enough to remove the sediment.

Chateau Dauzac is usually better with at least 7-9 years of bottle age. Of course, that can vary slightly, depending on the vintage character. Dauzac offers its best drinking and should reach peak maturity between 10-18 years of age after the vintage.