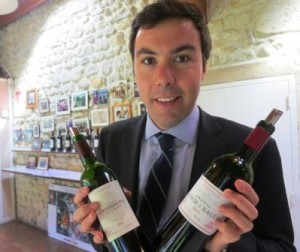 2011 Lynch Bages  72% Cabernet Sauvignn, 23% Merlot, 3% Cabernet Franc and 2% Petit Verdot are found in the blend, which reached 13.2% alcohol and will be aged in 75% new oak. Yields were 45 hectoliters per hectare.  2011 Lynch Bages is deep in color with a perfumed filled with coffee, blackberry, chocolate and tobacco, there are ample fresh and bright cassis flavors found in the finish. 91-93 Pts

Jeff Leve What was your biggest fear during the growing season for your 2011 Lynch Bages?

Jean Charles Cazes: “It was clearly rot and mildew”

Jeff Leve What did you do to combat that?

Jean Charles Cazes “We deleafed enough to help with the sanitary conditions and made sure there were not too many bunches per vine. It was also important the  bunches were evenly spread on the vine. This  helped keep the bunches clean, which avoided mildew”.

Jeff Leve In in this difficult vintage for 2011 Lynch Bages, what variety did you have more problems with?

Jean Charles Cazes: “Cabernet Sauvignon suffered more from the drought than the Merlot, which did better because their clay soils held more moisture. This allowed for better development in the Merlot”.

Jeff Leve Was this an early harvest for you with 2011 Lynch Bages?

Jeff Leve Did you use optical sorting for 2011 Lynch Bages?

Jean Charles Cazes: “We employed optical sorting for the first time in 2011.  I am undecided about employing the technology in future vintages yet.  The new destemming technology had a much more important impact!  The destemmer removed approximately 60 kilos of unwanted material from our 180 liter tanks”.