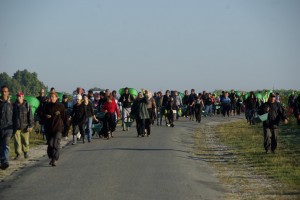 Over the past few years, Chateau Brane Cantenac has spared no expense in their current efforts to produce the best Bordeaux wine possible.  They recently added new destemming machines as well as adding the Air Tec Wine system, which helps to prevent unwanted grape crushing, reducing early oxidation.  In 2009, they were also one of the first chateaux to begin using the Vistalys Optical Sorting system.  How will all this work with the difficult 2011 Bordeaux vintage?  We spoke with Henri Lurton to find out.

Jeff Leve: What are your early thoughts on the 2011 Brane Cantenac vintage?

Henri Lurton: “The thing we can say at that stage about the 2011 Brane Cantenac is that we had a drastic change at the end of the harvest.  While we were fearing a difficult harvest period because of the very dry 4 months between middle of March down to the middle of July, the 50 to 60 mm of water between middle of July and middle of August and the last 3 weeks are helping to take the berries to a very nice expression”.

Jeff Leve: 2009 and 2010 were both riper, more alcoholic and concentrated vintages than 2011. Will 2011 Brane Cantenac offer a better expression of Brane Cantenac?

Henri Lurton: “It’s too early to tell now about the 2011 Brane Cantenac. The expression will be that of the vintage for sure, a difficult one. It will definitely be different from 09 and 10. But we won’t know until the malos are all finished and the final blend is done. We have a vague idea but … for the moment nothing is for sure. There’ s more acidity before the malos than in previous years, but it can be very different afterwards”.

Jeff Leve: How would you describe the 2011 growing season for you in Margaux ?

Henri Lurton: “Quite atypical. It had us change of mood a few times. Stressful, because of the fear of the impact of the drought on the vines and the grapes. Happy and confident thanks to the quick growing of the vines and therefore a homogeneous flowering and pleased due to the rains that arrived at the right moment. Stressed because of a variable climate until almost the end of August. And now we are happy again because of the nice back season we had until the end of the harvest!”

Jeff Leve: What were the grapes like during the 2011 Brane Cantenac harvest?

Henri Lurton: “We have thin skins and very expressive aromatic expression and all this on a perfect sanitary estate. I’m talking about the merlot for the  2011 Brane Cantenac”.

Jeff Leve: What about your Cabernet Sauvignon?

Henri Lurton: “The climate at the end of the 2011 harvest brought a smile to our faces for the Cabernet”! 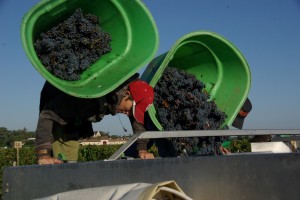 Jeff Leve:  What date did you start harvesting your 2011 2011 Brane Cantenac?

Henri Lurton: “We started the Merlot harvest, September 12. We began working on the Cabernet Sauvignon, September 20 and finished September 27.  We picked the Cabernet Franc starting September 21 which took only two days to harvest. We will pick the Carmenere, Monday, October 10”.

Jeff Leve:  How much of your vineyard is planted to Carmenere?

Henri Lurton:  “0.5%. We do  not include Carmenere in our wine.  We only grow it for experimental purposes”.

Jeff Leve: Is this your earliest harvest on record at Brane Cantenac?

Henri Lurton: “2011 Brane Cantenac is not the earliest. But it’s not far from it. The earliest was in 2003 when we started picking merlot September 9 and Cabernet Sauvignon September 23”.

Jeff Leve: What effect does an early Bordeaux harvest have on the style of your wines and the level of phenolic ripeness in the grapes?

Henri Lurton: “It depends on what happens during the entire vegetative period. The cocktail of what happens is never the same. The only thing we’re sure  of is, that the earlier the vintage, the bigger the chances are to be able to harvest in sun shining conditions!”

Jeff Leve: What specific choices will you need to make during the vinification  for 2011 at Brane Cantenac?

Henri Lurton: “We’ll see how it reacts, but the skins are so thin that we won’t have to be very energetic to extract. At reverse we’ll be very smooth and see how it goes”.

Jeff Leve Can you please share some technical information on your potential alcohol levels and pH numbers?

Photos are courtesy of Brane Cantenac.