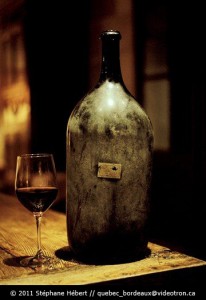 .
Tasting 1870 Chateau Margaux remains forever etched in my mind. Drinking old Bordeaux wine is one of the most sensuous, wine experiences possible.  That sensation is exacerbated when the wine is almost 150 years old!  Not only was this the best wine of the previous decade, but it remains an unequaled tasting experience that will never be forgotten.
.
Think about this. In 1870, construction began on the Brooklyn Bridge, the Democrats chose the symbol of the donkey to represent their party, the final Confederate states were readmitted to the union following the Civil War, France declared war on Prussia, The New York Times declares Baseball is the national sport and Ulysses Grant was President of the United States. While all that was taking place, Bordeaux experienced a tremendous vintage.
.
Old wines offer unique sensory experiences.  They deliver complex, unequaled aromatics and textures painted with the patina of age. 99% of the world’s wines are meant to be enjoyed within the first year they are produced.  Of the remaining one percent, few of those wines improve with decades of age.  The amount of wines with the ability to age, evolve and offer pleasure after 100 years is miniscule.
.
A large part of the rational behind the high prices paid for Latour, Lafite Rothschild, Mouton Rothschild, Haut Brion and Margaux is because history has shown, in the best vintages, those Bordeaux wines have the ability evolve and improve with decades of time. In some cases, the wines have been known to deliver stellar tasting experiences, even though they were produced over 100 years before being opened!
.
1870 Chateau Lafite Rothschild is a legendary wine! The bottles discovered hidden away in the Glamis Castle in Scotland are possibly the holy grail for most wine collectors.  The phylloxera epidemic came close to destroying the majority of Europe’s most famous vineyards.  Phylloxera was caused by tiny insects that devoured the roots and leaves, which killed the vines. The problem was first discovered in the Rhone wine region in 1863 and quickly spread throughout Europe. By 1890, close to 75% of Europe’s vines were destroyed.  Part of the reason 1870 was so successful was, the wines were product of a low yield harvest. caused by icy frosts. This was followed by scorching summer weather which allowed the grapes to fully ripen.
.
1870 Margaux – From the cellars of Domaine de Chevalier. The owner of this historic Pessac Leognan estate, OlivierBernard shared this 6L bottle at a dinner for tasters of the GJE at the chateau. The bottle had been in the cellars of Chevalier for over a century!
.
The color of tea, potent, earthy, truffle, spice, tea, leather and tobacco notes were only the first scents to arrive. This elegant, soft, polished wine ended with a parade of fresh, ripe strawberries and raspberries in a rich syrupy texture. 100 Pts