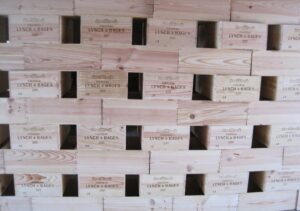 Chateau Lynch Bages is one of the most popular and cherished brand names in Bordeaux wine today. This Fifth Growth
In the 1930s, Jean-Charles Cazes, who was already in charge of Château Ormes de Pez in St. Estephe signed an agreement to lease the vineyards of Chateau Lynch Bages. Jean-Charles Cazes later purchased both properties on the eve of the Second World War. Lynch-Bages has been run by the Cazes family ever since.

The Cazes family has a long history in the Bordeaux wine region dating back to the second half of the nineteenth century. Around 1870. Lou Janou Cazes and his wife Angélique settled in the village of Saint-Lambert, a few steps from the Château Pichon-Longueville Baron. It was here that Jean-Charles Cazes, the couple’s second son, was born in 1877. A sister, Marie, later married the cellar master of the Château Ormes de Pez in Saint Estèphe. Initially apprenticed as a baker in Pauillac, Jean-Charles Cazes married his employer’s daughter. Four boys were born into the family.

Among them, André, the youngest, holds an important place in the history of Lynch-Bages. Leaving in 1914 for the Great War and returning with the rank of Captain, Jean-Charles resumed his profession in 1918. The total destruction of the bakery in a fire in 1924 and his ability for figures led him to work in a local bank. As a bank clerk, he met many winemakers in a period marked by the Depression of the 30s. In 1933, the owner of Château Lynch-Bages, General Félix de Vial, offered him a lease agreement on the vineyard.

Times were hard. Taking the Domaine well in hand before the 1933 harvest, he was able to purchase the property in 1939. Thanks to his skill as a winemaker, Jean-Charles Cazes decisively influenced the wine of Lynch-Bages by harvesting late and striving to produce ripe and powerful Bordeaux wine. The wines came to the attention of Alexis Lichine who helped promote the estate.

While Jean-Charles continued to handle the properties, André developed an insurance business. At the same time, he entered the municipal council of Pauillac in 1947 and was elected mayor in 1951, and then General Counsel of the Gironde. He held these two mandates for forty-two years until 1993. 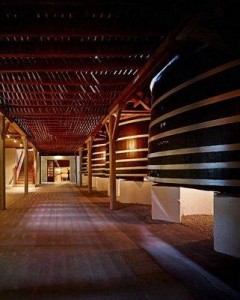 In the early 60s, André took over managing the property. Around 1970, technological advances and the opening of new markets, including the United States, gradually presented new horizons. André Cazes, purchased the adjoining vineyards of Haut-Bages Averous and Saussus. He recultivated the lands abandoned during the phylloxera crisis. In a few years’ time, André Cazes restored and expanded the vineyard, which reached nearly 100 hectares by the late 1990s. Jean-Michel, an engineer in Paris, rejoined André Cazes in 1973. He settled in Pauillac in 1975 and modernized the Bordeaux wine making at Lynch-Bages. He installed a modern fermenting room, insulating the buildings, developing new technologies and equipment, building storage cellars, restoring the loading areas and wine storehouses over the next fifteen years.

June 1989 marked the inauguration of the new facilities. In 1990, the vineyard grew by some 5 hectares planted with white grape varieties. « Blanc de Lynch-Bages » was born. Beginning in 1987, Jean-Michel Cazes helped the insurance company AXA to build a portfolio of quality vineyards, which extended to Bordeaux and abroad, to Portugal and Hungary. From 2001, the two groups separated and the family company pursued its development in Languedoc, at Châteauneuf du Pape, as well as Australia and Portugal.

In 1989, Jean Michel launched the Relais and Château Cordeillan-Bages, hotel and restaurant and over the years were added the restaurant Le Chapon Fin in Bordeaux, the local tourism agency Bordeaux-Saveurs and Le Village de Bages in Pauillac with its shops and attractions. In 2006, Jean-Charles Cazes took over as head of the family estates. Jean-Michel Cazes continues to lead the wine and tourism division of the family’s activities. Sylvie Cazes, now President of the family group’s Board of Directors, managing director of Chateau Pichon Lalande and president of the UGCB is in charge of public relations. Marina Cazes, sister of Jean-Charles, is the Webmaster, responsible for communication tools and documentation in general. Due to their constant promotion in the Asian market, Chateau Lynch Bages is one of the strongest brands, aside from the First Growth’s in China.

With more than 100 hectares of Bordeaux wine vineyards located in Pauillac, the vineyards of Lynch-Bages are planted not far from the river with alluvia, sand and gravel soils. From a geological point of view, the soils of Lynch-Bages are homogeneous, consisting mainly of Garonne gravel of Günz (early Quaternary) from the slow erosion of the Pyrenees by the Garonne. Highly filtered and loam poor, these gravely and sandy soils collect heat during the day to better release it during the night. Poor and scantly fertile, they allow a moderate growth of the vine and promote the subtlety of the fruit. Well drained, this promotes a deep root: the slight clay content in the subsoil brings freshness and allows regular mineral nutrition to the vines. 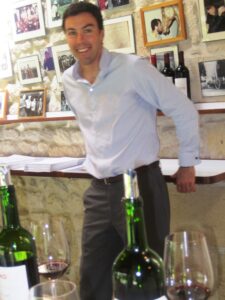 Extensive work in the vineyards starting in 2005 with Massal Selection

Starting in 2005, Chateau Lynch Bages has been working extensively in their vineyards to protect their vegetal genetic material. The chateau adopted “selection massale” for replanting. “Massal selection” differs from clonal selection in the following ways: a clone is a vine propagated from one single vine, a mother vine, and each plant is identical in DNA and uniform in personality. During the 60s and 70s that became the rule in Bordeaux. Today, most of the plantations are still done with this technique, using nursery-supplied clones. As a result, we believe in the long run, a vineyard loses its identity. To avoid that situation, we decided to act before it was too late.

Massal selection involves choosing a number of outstanding vines from the vineyard and then propagating new vines from that budwood. Massal selection is accomplished through field selections by taking carefully chosen cuttings from old vines. In order to perpetuate the original diversity, we only consider parcels planted more than 50 years ago.

Lynch Bages feels the mix in the older vines is the result of decades of observations, adaptations and optimization on the actual terroir of the estate. They also think genetic diversity results in an efficient safety-oriented strategy, leading to less exposure to a catastrophic disease or adverse condition that could gravely affect a cloned vineyard. To help ensure the correct result, cuttings from only the very top vines are propagated. This is a long term and highly time consuming process. However, it’s well worth the effort in our opinion.

After several years of work, they put together a “bank” of thousands carefully selected Petit Verdot and Cabernet Sauvignon genetically different vines. These vines reflect the long history and diversity of the Lynch-Bages vineyards. We are in the process of field selection of the merlot vines. This will take another year or two. We started with petit verdot before merlot because the petit verdot is small. .

Currently, they have at their disposal a wide “pool” of Petit Verdot and Cabernet vines for use in future reproduction and planting. They plan to complete the selection of Merlot within 2 or 3 years. Then the actual replanting of the entire vineyard will take many years of planning and organization. It’s a long term commitment. We are in no hurry and believe it’s worth it.
.
Their first Petit Verdot parcels planted with this technique will be picked during the 2010 harvest. Their cabernet sauvignon plantations of the last 2 years were all made from the bank and will start producing with the 2011 vintage.

Entirely done by hand, the grape harvests demand a complete mobilization of the technical teams of Lynch-Bages, aided by some 250 seasonal workers. In the weeks preceding the harvest, the 110 parcels that comprise the estate are regularly checked by chemical analysis, visual observation and berry tasting monitoring. Thanks to satellite photography, an intra-plot analysis of the vineyard is now possible which enables a precise qualitative ranking of the vineyard and a very fine collection of those grapes having reached full maturity. A weather station helps refine the expected timing of the harvest while the number of harvest workers allows a high reactivity, making it possible to make a decision on the date of the harvest and extending it as far is needed.

The Merlot harvest takes two days, often followed by a break of several days. The Cabernet grape harvest can be properly done in eight to ten days. Set up in the vineyard itself, the sorting tables contribute to the quality of the harvest. This early manual sorting is very efficient because it targets intact grapes. Everything is done to limit damage to the grapes when transporting the harvest. The delivery to the vats is handled with great care, gently, always aimed at preserving the integrity of the grape and its aromatic potential.

The specific characteristics of the vinification of white grapes demand that the grapes brought to the vats must be impeccable and protected against oxidation. The harvest takes place over a limited period and only early in the day to take advantage of the morning freshness. The manual sorting on mobile tables at the centre of the plots is followed by a meticulous transport in small refrigerated containers to protect against any damage to the aromas.

The work in the vat room

The Bordeaux wine making process is tailored precisely to the terroir’s characteristics and to the distinctive features of each vintage. A huge vat room of 35 vats of different sizes allows for separate treatment of each plot or each uniform batch of grapes. Once the vats are filled, a specific vinification is applied to every parcel.

The macerations are long and spread out over a course lasting more than three weeks. Running off and devatting processes are carried out gently: for instance, gravity flow avoids unnecessary pumping. One third of the malolactic fermentation is done in barrels and two-thirds in vats.

Aging takes place in French oak barrels, renewed at 70 or 80% depending on the vintage. To separate the fine wine from the lees, five to six manual rackings are done during the aging process. At the end of the casking and after the traditional, but light, fining with egg whites before bottling. The chateau produces a second wine, Echo de Lynch-Bages, whichis often a blend of 50 to 60% Cabernet Sauvignon, 25 to 30% Merlot and 15 to 20% Cabernet Franc. Aged in wine barrels over a period of twelve to fifteen months.

Blanc de Lynch-Bages is vinified 50% in new barrels, 20% in one-wine barrels, and 30% in vats. The fermentation temperatures are monitored through a system of temperature control for each individual barrel. It is aged on lees with daily stirring for six months.

The style of Chateau Lynch Bages blends power, concentration and charm. In the middle between traditional and modern styles, the wine offers ripe cassis, tobacco, earth and truffle flavors. The wine ages well. In the best vintages, 30, 40 or 50 years of evolution is possible.