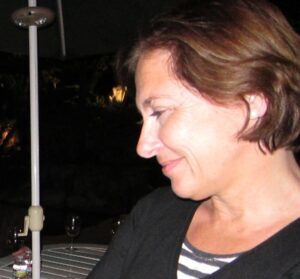 Big news in the Bordeaux wine world this morning. Sylvie Cazes, president of the UGC, (Union of Grands Crus Bordeaux)  an active member of the Bordeaux city council and an owner of Chateau Lynch Bages, has been appointed as the new managing director of Chateau Pichon Comtesse de Lalande.  Cazes replaces Gildas d’Ollone as director of the Second Growth, Pauillac estate.
Sylvie Cazes Sylvie Cazes Chateau Pichon Lalande is the new team in Pauillac. Sylvie Cazes is not the first member of the family to manage a property in Pauillac, aside from Chateau Lynch Bages. Her older brother, Jean Michel Cazes was in charge of   Pichon Longueville Baron  from 1987 until 2000.  Jean Michel was replaced by Christian Seely.

In an additional development, the busy Sylvie Cazes has been awarded more responsibilities. Along with being named managing director of Chateau Pichon Lalande, she will also be in charge of all the Bordeaux wine properties owned by Roederer.