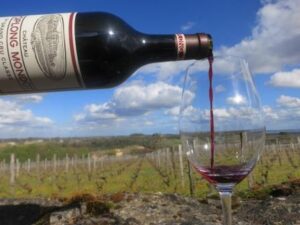 Big News! Make that very big news. In breaking news, Chateau Troplong Mondot was sold to SCOR Group by Xavier Pariente, the owner of Chateau Troplong Mondot. The SCOR group is a massive French Insurance Company that was formed in 1970. This is their first investment in Bordeaux. While details on the transaction are a closely held secret, the rumors are that price paid was close to 180 Million Euros! That is a record setting price for land in St. Emilion at close to 5.5 Million Euros per hectare.

That makes 3 sales of Classified vineyards in the Right Bank in one week! For details on the 2 other sales just announced 2 Classifed Growth Vineyards Sold in 1 Week!

What makes this transaction unique is that the other 2 vineyard sales that took place this week were for smaller estates that sold to owners of vineyards that were classified as Premier Grand Cru Classe B with the potential to have those vines merged into the larger, higher classified vineyards. Troplong Mondot is the first sale in years of a First Growth classified vineyard! Troplong Mondot earned their status in the 2012 Classification of Saint Emilion.

The timing of the Troplong Mondot sale is noteworthy, but not the sale. There has been talk for years about the estate being discreetly marketed to investors. The biggest rumors took place shortly after the passing of the owner, Christine Valette in March, 2014. At the time was that the property was sold to the Perse family, the owners of Chateau Pavie. But as we know now, that rumor can surely be put to bed. It has also come to light that SOCR may have purchased a minority stake in the vineyards in 2014, to help with inheritance issues arising from the passing of Christine Valette.

In conversations with Troplong Mondot, it is expected that the team will remain in place. A new director was named for Troplong zmibfot as well. Aymeric de Gironde who will be leaving Cos dEstournel, has been tapped for the job. shortly. During the transition, Xavier Pariente, who has been involved with Troplong Mondot since 2002 will remain with the estate. This is a big move and decision for Xavier Pariente and his family. I have known their family longer than perhaps any other family in Bordeaux, I will miss seeing them at the estate. It’s always difficult to sell a family owned vineyard. There are numerous reasons why sales like this take place. Taxes, the children might not want to manage the vineyard, or the owner has decided to move on with their life, cash out and enjoy life.

Chateau Troplong Mondot is one of the top estates in all of Bordeaux. Prior to being purchased by the Valette family, the vineyard was formerly the property of Georges Thienpont, the owner of the famed Pomerol estate, Vieux Chateau Certan.

Chateau Troplong Mondot owns 33 hectares of vines planted to 90% Merlot, 8% Cabernet Sauvignon and 2% Cabernet Franc. Troplong Mondot occupies one of the best terroirs in the appellation. They are situated on top of the Saint Emilion plateau and slopes, at an elevation that allows views of the entire St. Emilion village. Chateau Troplong Mondot also owns and operates a luxury bed and breakfast and restaurant on the property, Les Belles Perdrix which was included as part of the sale. The restaurant Les Belles Perdrix recently earned its first Michelin star.

Chateau Troplong Mondot has been on a roll since 1988. Prior to that vintage, while the terroir has always been considered one of the best vineyards in all of St. Emilion, the wines were not exciting. But thanks to the non stop, tireless efforts of Christine Valette and Xavier Pariente, the wines have become better and better. There have been several outstanding vintages produced here over the years, 1989, 1990, 2000, 2005, 2009, 2010, 2012, 2015 and 2016 are certainly at the top of the list.