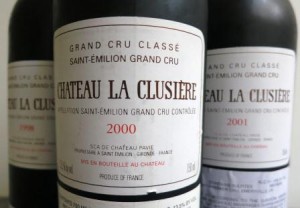 Learn everything about Chateau La Clusiere St. Emilion with wine tasting notes, wine and food pairings, best vintages, a history of the property, information on the vineyards, and winemaking. If you want to read about other important, Bordeaux Chateaux: Links to all Bordeaux Wine Producer Profiles

The estate of Chateau La Clusiere was purchased by Gerard Perse in 1997 from Jean-Paul Valette. If the Valette name sounds familiar, it’s because they were also the owners of Chateau Pavie, which Gerard Perse purchased as well.

The Valette family continued to own Chateau Troplong Mondot for years after that. 1998 was the first vintage of Chateau La Clusiere that was fully under the control of the Perse family.

Chateau La Clusiere is a small 2.5 hectare Saint Emilion vineyard set between Pavie Decesse to the north and Pavie to the west and south, planted with 100% old vine, Merlot.

On average, the vines were close to 55 years of age, with many vines being much older than that! The density of planting was 5,500 vines per hectare. The terroir, similar to Chateau Pavie is clay-limestone soil composed of fine-textured brown earth on a layer of limestone with marine fossils.

Coming on the heels of the breath-taking 2000 Chateau La Clusiere, 2001 was the last vintage for this Right Bank property. After 2001, the Bordeaux wine vineyards of La Clusiere were officially merged into Chateau Pavie in 2002.

This was allowed to take place because of the similarity of terroirs which led I.N.A.O. in 2002 to authorize the integration (or, perhaps, reintegration) of La Clusiere.

The vineyard of La Clusiere is planted to 100% old vine Merlot that was on average 50 years of age. The terroir is limestone and clay soils.

Yields were kept low at Chateau La Clusiere. On average, they were only 15 hectoliters per hectare. Malolactic fermentation takes place in barrels. The wine was aged in 100% new, French oak barrels for close to 24 months before bottling.

This is easily discovered by any taster with a glass of the 2000 La Clusiere in front of them. Often, one-hit wonders become very popular in the marketplace, especially when so little wine was produced. In fact, the production of the 2000 Chateau La Clusiere was close to a whopping 350 cases for the entire world!

Chateau La Clusiere is best served at 15.5 degrees Celsius, 60 degrees Fahrenheit. The cool, almost cellar temperature gives the wine more freshness and lift. Young vintages can be decanted for 1 hour or so. This allows the wine to soften and open its perfume.

2001 was the last vintage of Chateau La Clusiere produced.