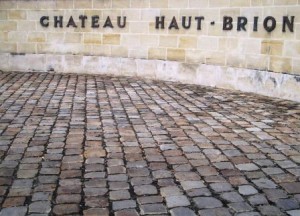 In a smart move that was not surprising news to Bordeaux insiders, it was recently announced that Prince Robert de Luxembourg, the owner of Domaine Clarence Dillon bought the holdings of the Allary Family in time for the 2012 Bordeaux vintage. The wine had been marketed under the name of Domaine Allary Haut Brion. This deal follows their recent purchase of land in St. Emilion, when the owner of Haut Brion and La Mission added to their holdings with the acquisition of Quintus. The deal with the Allary family was finalized in September, slightly prior to the 2012 Bordeaux harvest. The price has not been disclosed. However, when you consider that Les Carmes Haut Brion was purchased in 2010 at the cost of 3.8 Million Euros per hectare, with the vineyards located in the middle of Haut Brion, the price was not cheap!

The Allary family bought the small, 1.3 hectare parcel in 1918. In a deal following World War 2 that worked well for both parties, the Allary family made an arrangement to allow Haut Brion the rights to produce wine from the holdings of the Allary’s. In return, the Allary family received 1.350 liters of Chateau Haut Brion. This was later adjusted to one and half barrels of wine, which is close to 36 cases of wine from the Pessac Leognan vineyards. From 1954 to 1978, the wine was produced under the name of La Passion Haut Brion.

That changed when the Allary family. began making their own wine, with the help of Stephane Derenoncourt. Originally, the wine was slated to be sold under the name of La Passion Haut Brion. However, a lawsuit was initiated and the court ordered the Allary family to cease and desist selling the wine as La Passion Haut Brion. The name was quickly changed to Allary Haut Brion. Only 4 vintages of the Allary Haut Brion have been produced, 2008, 2009, 2010 and 2011. The fruit from the 2012 harvest will be probably be placed in Le Clarence de Haut Brion, the second wine of Haut Brion, but the final decision on that has not yet been made by Jean Philippe Delmas and his team.

The entire Pessac Leognan vineyard of Allary Haut Brion will be replanted as the varietal mix contains a very high portion of Cabernet Franc and the vines are fairly old. It is not yet determined what varieties will be planted yet. The vines were planted by the Haut Brion team when they were responsible for making the wine. Currently, the vineyard is 60% Cabernet Franc and 40% Cabernet Sauvignon> with vines averaging 38 years of age.

While collectors pay a high price for the rare bottlings La Passion Haut Brion, it is known that prior to 1979, the wines labeled La Passion were either the exact same wine as Haut Brion or Bahans Haut Brion, the second wine. The only difference was the label.