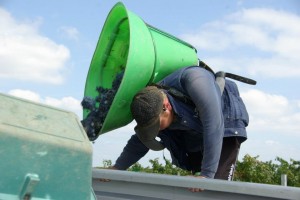 Jeff Leve Having gone through the growing season and harvest, now that your vats are fermenting, what previous year does the 2012 Bordeaux vintage remind you of?

Christophe Capdeville “In our wine world, everything is different each year and that goes for 2012 too. For instance, the drought could have reminded us of 2003 but it was not as severe. It is impossible for two vintages to be identical. Too many factors come into play in the vineyard for it to be the case. But 2012 somehow reminds me of 2000, because of the pressure from potential diseases, and particularly from the mildew, as well as the cool temperatures of the month of July, the hot and dry weather in August and the rains slightly before the harvest. That year, the great ‘terroirs’ shone through.”

Jeff Leve What was the most difficult or stressful part of the 2012 Brane Cantenac growing season this year?

Christophe Capdeville “The period that followed the flowering was a hardship because the rain in the beginning of June added  a joint pressure from both the mildew and oïdium, which rarely happens. On the organic parcels, one had to be made of steel not to be tempted to treat the vines with traditional (non-organic) products. Fortunately, a very rigorous work in the vine enabled us to deal with the problems in a fashion that was not detrimental for the harvest. ”

Jeff Leve Compared to 2011, did you need to spend more or less time on sorting the 2012 Brane Cantenac vintage?

Jeff Leve Did you have problems with botrytis or other issues following the April rains?

Christophe Capdeville “The rain in April had no impact on the botrytis. It was too early in the cycle. The rain in September and October however did induce the development of botrytis.”

Jeff Leve What special vineyard techniques do you need to do when the flowering is uneven, as it was this year?

Christophe Capdeville “We cut off some of the bunches which were late and had not turned color, particularly in the merlot parcels. Then the sorting did the rest. The Merlot is the varietal that turned out to be the least homogenous. The Cabernet Sauvignon was much more even. “

Jeff Leve Did the drought and stress present you with any unique challenges?

Christophe Capdeville  “What I will remember most from this year is the brutal discrepancy between the wetness in the spring and the drought in the summer. One had to reason smartly to organize the work accordingly: for instance, de-leafing in order to aerate the bunches in order to limit the impact of the humidity without exposing them too much to the midsummer sun rays. It was all a matter of observation and precision. One had to be in the vineyard constantly, make smart choices, analyze the weather forecast each day and basically do a customized job, plot by plot and even bunch by bunch at times. But that’s what our job is all about, isn’t it?”

Jeff Leve Which of your Margaux terroirs performed best?

Christophe Capdeville  “The terroir of Brane Cantenac is a great one: fortunately, it can adapt itself to the driest conditions as well as the wettest. The clay & gravel soil on the plateau continue to nourish the vine throughout the summer. By the same token, they do well  in rainy conditions  like we had in September and October. The sandy parts of the vineyard did well too. I would say that the ‘late’ parcels (meaning those which ripen the latest) are the ones which suffered the most from the bad weather this harvest.”

Jeff Leve When did you start harvesting?

Christophe Capdeville “We started on Sept 27 with the very young vines. We started on the Merlot on October 1 . This year, one had to really apply the moral of Jean de Lafontaine story …’No use running, one just has to leave on time’ in other words, slow and steady wins the race! The important thing was to start harvesting early enough and on the right day!”

Jeff Leve When did you finish picking?

Christophe Capdeville “We finished the Cabernet Sauvignon October 15 and Carmenere the next day.”

Jeff Leve What were the conditions like for you during the harvesting?

Christophe Capdeville  ”The fact that most of our terroir is early enabled us to start to pick early. As a result, we harvested the Merlot, the old Cabernets Sauvignon and Cabernet Franc in the best possible conditions. So when the heavy rain appeared, we had 2/3 of the harvest in already.  We hastened the pace before the rest went to waste! That’s all we could do this year!”

Jeff Leve How many pickers did you employ?

Christophe Capdeville “We hire about 100 pickers for the harvest each year.”

Jeff Leve Due to the quick change in the October weather, did you finish picking earlier than anticipated?

Christophe Capdeville “Yes, in order to prevent the skin from deteriorating. But one had to be able to do it. And that means having enough pickers on hand and a vat room big enough to do it.”

Jeff Leve Did you use optical sorting this year?  If so, how important was it for you?

Christophe Capdeville “We’ve been using the optical sorter since 2010. It is a wonderful tool which enables us to eliminate precisely what we don’t want. It is a matter of fine tuning. This year, the sorting was focused on the berries which were ‘preserved’ (like in ‘raisins’) ,  the pink berries and those which had begun to rot.”

Jeff Leve Did you purchase any new equipment or renovate your wine making facilities this year?

Christophe Capdeville “This year, we purchased new vinification tools to be used for pumping over and ‘delestages’(rack and return) . They favor the pumping over the must in a very homogeneous way, without over-extracting yet optimizing the release of what’s inside the skin of the berries.”

Jeff Leve What are your yields?

Christophe Capdeville “We ‘re not finished yet but the final yield should be between 40 and 42 hectoliters per hectare.”

Jeff Leve Do you think any variety performed better in this specific year?

Christophe Capdeville  “I think it’s more a question of ‘terroir’ than varietal. But it is true that the Merlot appear very good at this time already.  The Cabernet Sauvignon which were harvested at the right time are excellent also. I think the Cabernet Franc suffered the most this year.”

Jeff Leve What are your alcohol levels?

Jeff Leve What steps are you taking this year during vinification and the elevage?

Christophe Capdeville “During the vinification, we’ve favored the delestage to enhance the extraction in a soft fashion. Some of the vats were concentrated to offset the dilution caused by the rain. The macerations should be done prudently so as not to give harsh wines. Finally, the blending and ageing will have to bring forth the potential of the vintage.”