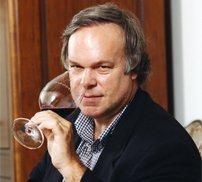 With all the brouhaha swirling around the Internet these days concerning Robert Parker of The Wine Advocate, one of these days, he’s going to retire from  offering wine criticism on Bordeaux wine. Parker gave up writing about California wine this year. It’s been ages since he wrote about the wines of Burgundy, Italy, Spain, Australia and other regions.  One of these days Parker will retire. In recent interviews he he eluded to the possibility of quitting in about 5 years.

This is going to thrill his critics! Or maybe not. Without Robert Parker to kick around, what will they write about? So, maybe it’s not good for them. It’s my view that it will not be good for Bordeaux loving consumers either.

I feel sorry for the next generation of consumers who did not have the help of Bob’s notes when buying futures. Whether Bordeaux is given up, or it’s pried from Bob’s cold hands, it will be a much harder sell for the chateaux. Less ground will be covered as well. Who else is going to taste as any wines from the smaller, less prestigious appellations? If you think low scores keep wine from the marketplace, imagine what no scores is going to do to all those small growers? The power will shift back to negociants. Without Parker’s scores to quote, the chateaux will have a problem demanding that prices continually escalate. Prices for the top classified growths will remain firm and could increase, but the majority of Bordeaux wine producers are going to have a hard time keeping up with the fame and fortune of the more prestigious estates.

It’s easy to take buying all the delicious wines from appellations like Cotes de Castillon, Fronsac, Bordeaux Superieur, Lalande Pomerol, Haut Medoc and other areas for so little money for granted. Without Bob Parker’s championing those appellations, those wines would not be in the marketplace. We would not have heard of them. All the people who taste Bordeaux hit the famous wines, but how many writers do intensive tasting of the small, unknown, unheralded producers? Regardless of if you buy those small wines or not, (I buy those wines) the level of quality reached by those growers is part of the reason the classified wines are making better wine today. Trust me on this, when a classified growth sees a higher score being awarded to a small grower, they know they need to up their game and make better wine, else they will fall even further behind.

Robert Parker will not be replaced by one writer or critic. He is a unique talent that arrived at the perfect time. He has a track record of more than 30 years that cannot be ignored. There is no one else with those same level of qualifications. While people argue until the cows come home about palate preference, the truth is, Parker awards high and low scores to a myriad of styles of Bordeaux. Tasters who have a preference for riper styles of wine, or more traditional styles falsely contend that Parker awards higher scores to the style they do not prefer, but Parker’s track record sets the story straight. This is a unique skill set. When you look at most tasters body of work, they all seem to have problems with wines at the far end of the spectrums, traditional or ripe that are not their stylistic preference.

My guess is, the Internet with all its vast array of contributors will do its best to replace Bob. There are numerous good tasters who share their comments about Bordeaux. Those tasters all have specific likes and dislikes. Each of those people will attract small followings for the specific appellations that people deem they are best at tasting.

I imagine wine writing is going to be fragmented. Some tasters are better at recognizing quality in the Left Bank, but have problems with the riper Merlot based wines of St. Emilion and Pomerol. The reverse is true as well.

The scores that will be offered and quoted to help sell wines will follow that lead. Instead of seeing notes from only a few tasters, you will see a lot more scores from more tasters, but each of those tasters will not be widely quoted.

When Parker hangs it up, on the one hand, people will not have the advantage of Bob’s tips on the better wines and values. On the other hand, prices will probably not move quickly again. There will be no need to jump on a wine as a future. The thrill of buying futures will be gone.

One last guess… prices for high scoring Parker wines will take huge jumps. As there will be no more 98, 99 or 100 Pt Parker wines that offer some buyers a sense of security, people will flock to those wines.

This is not a knock on all the very good tasters out there. It’s quite the opposite. But Parker occupies a unique place in wine criticism that will remain unequaled. I hope he sticks around for as long as he’s having fun. With luck, he’ll be having fun writing about wine until the current release, or at least the 2009 Bordeaux wines mature.