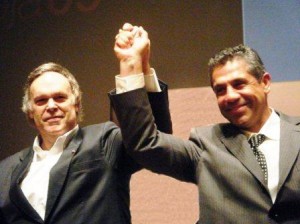 Robert Parker took steps to investigate all claims arising from the relationship between Robert Parker, The Wine Advocate, Pancho Campo, The Wine Academy of Spain and Jay Miller.

Robert Parker responded to critics this morning and posted the following on his website Monday, December 12.

“We have taken the accusations very seriously since this story broke. Below is a statement from eRP.com’s lawyer Steve Haas,esq. about our investigation. When the final report is in, we intend to be totally transparent and publish it fully on this Board. Our lawyers are interviewing Pancho Camp today, and all relevant contracts and emails have been translated into English and reviewed”.

Parker appalled by numerous comments and postings before all the facts are in: “I remain appalled at the lynch mob rush to judgment by the blogging community, but there have been several very By the way, Jay is still working for TWA until January 1, because we believe he has done nothing to compromise the independence of our reviews, and based on the information we have already acquired, Jay clearly and irrefutably has taken no money for a wine review or winery visit, but I will await the lawyer’s final report”.

Posters, bloggers and critics have not taken the word of Robert Parker, or David Schildknecht, as well as that of Neal Martin. They have all stated Jay Miller served notice of his intention to leave his job as a wine critic for Robert Parker and The Wine Advocate, long before this story on potential conflicts of interests broke. In a direct response to this issue, Parker wrote; “Moreover, his (Jay Miller’s) retirement has been in the works since January of 2011, as David indicated. Obviously I knew for two months, as did Jay and the Wine Advocate staff, that the announcement was scheduled for December 5, and we had no reason to postpone it”.

The following is from Steve Haas, Esq, on behalf of the law firm hired to investigate:

“In light of allegations and innuendos posted by various internet blogs concerning visits made to Murcia, Spain by Jay Miller, an independent contractor who has conducted tastings on behalf of The Wine Advocate for more than 5 years in addition to his own wine related endeavors, and the participation by The Spanish Wine Academy in such visits, The Wine Advocate has engaged the law firm of Cozen O’Connor to conduct an investigation to determine whether our strict policy of independence in the review and tasting of wines for publication in The Wine Advocate or posting on www.eRobertparker.com was compromised by any conduct of The Wine Advocate or any other party associated with tastings in that region”.

Robert Parker closed with the following; “We have placed no limitation on Cozen O’Connor’s efforts to seek information from whatever sources whom they identify as appropriate for a thorough investigation. This undertaking is merely a continuation of our efforts to guard our independence and integrity with vigilance for the benefit of our readers and subscribers”.

I sent an Email to Pancho Campo today with questions seeking to clarify a few points and issues.  Campo was about to hop on a plane to celebrate his fifteenth anniversary with his wife.  He had time to answer one question.  I look forward to receiving more answers from Pancho when he returns to Spain. This is the only question he has answered so far.

Jeff Leve: Did you or TWAS ever receive payment from The Wine Advocate for services? Or did you and or TWAS offer your services without charge?

Pancho Campo “Bob and I had a gentlemen’s agreement for assisting Jay. The Wine Advocate paid for absolutely all the expenses incurred by The Wine Academy in all official trips for assisting Jay Miller. We also took advantage of these trips to record many of the videos for Madwine TV.

I will publish all questions and answers as soon as we hear from Pancho Campo.

The Internet is a great resource that allows anyone with a keyboard the ability to say what they want, when they want.  This is a good thing. All of us should call it as we see it. That being said, for numerous reasons, some fair, and some not, there is a rush to judgment by people simply because it’s Robert Parker. If this story was about any other wine writer, there would be no rush to judgment. In fact, if it was not about Robert Parker and The Wine Advocate, there would probably not even be a story.

Feel free to post your thoughts, comments and questions.